The HP ENVY 14 Spectre was easily one of the most promising ultrabooks we saw at CES 2012, and a few months of waiting hasn’t dampened our enthusiasm. The premium notebook combines high-end features and unique materials into a 14-inch body that’s distinct from just about everything on the market, which is something you couldn’t say for many of HP’s previous entries in the ENVY line. Does this unique machine rise above the pack? Let’ find out.

The first thing you’ll notice upon taking the Spectre out of its premium packaging (after sliding off the complimentary neoprene case) is a lid that isn’t so much glossy as glassy. Gorilla Glass, to be specific: not only does it cover the screen, you’ll also find it on the touchpad, palmrest and the jet-black lid of the laptop itself. While this is certainly a unique approach (and much appreciated on the screen and touchpad) it makes the lid a rather predictable magnet for fingerprints and smudges. If the Spectre catches your eye for its looks, be prepared to lug around a microfiber cloth to keep it attractive. 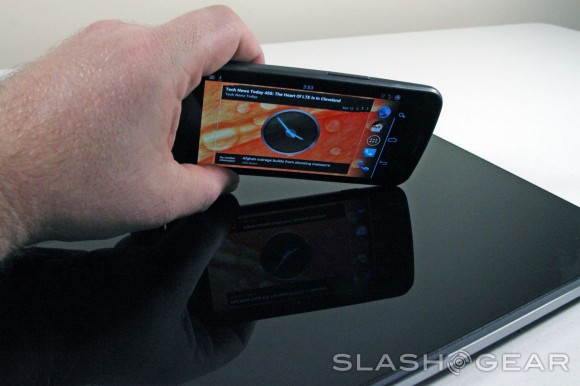 The rest of the body is either hard or soft-touch plastic, which helps keep the weight at least comparable to 13-inch ultrabooks. Like Dell’s XPS 13, the HP claims to cram a screen into a body one size smaller than otherwise possible. Observing the tiny bezel on either side of the Spectre(but not the top and bottom) it’s easy to believe them. Indeed, the screen is one of the laptop’smost impressive features: a full 1600×900 LCD  panel with downright dazzling brightness, I can say without hesitation that it’s one of the best laptop screens I’ve ever used.

Surprisingly, the keyboard and touchpad measure up to this high standard. While the keyboard isn’t the best (that honor still goes to Lenovo) it’s plenty comfortable for extended typing, and the backlight and full function row are welcome additions. The all-glass trackpad seems to have finally caught up with Apple’s lofty Macbooks: tracking, gestures and recessed clicks are as good as any Windows laptop I’ve ever used, and better than the vast majority. 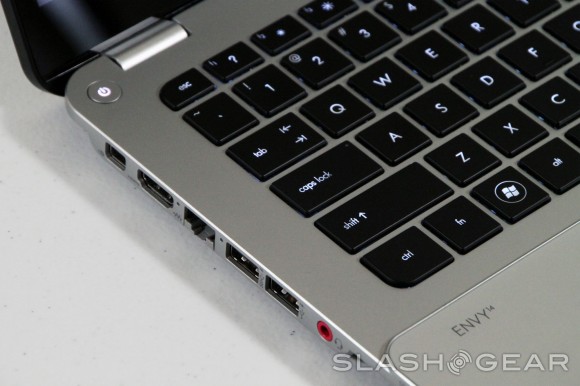 Even with all this style and usability, HP manages to cram more ports into the Spectre 14 than any other ultrabook on the market. Along the left side you get an SD card slot (a feature all too often ignored in the form factor), a combined microphone/headphone port, one each of USB 2.0and 3.0 ports, an Ethernet jack, and both HDMI and DisplayPort video-out options. As a major advocate of multiple monitors, I appreciate the flexibility. On the right you get an analog rocker dial (a miniature version of the one found on the ENVY 15) with a glowing Beats logo, and a mute and Beats equalizer button on either side. A pair of indicator lights and the power jack round out the hardware.

The Envy 14 Spectre isn’t the slinkiest ultrabook around, or the lightest, or even the prettiest. But for a combination of great screen and trackpad, solid keyboard, and all the inputs and outputs you’re likely to need, it’s an excellently compact design. It’s the first ultrabook I’ve seen that could viably replace a full-sized laptop for all the functions one might need it, save heavy gaming or popping in a DVD. 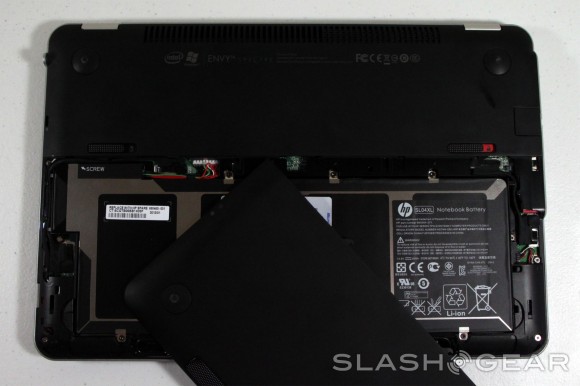 HP’s usual mess of packed-in software accompanies the Spectre, along with Norton, Microsoft’s Office, Silverlight and Bing Bar, and the HP MovieStore. But like the HP Envy 15, they’ve included both Adobe Photoshop Elements and Premiere Elements free of charge (or more accurately, included in the price tag). As a regular user of both programs in their CS4 flavors, that’s a big plus, seeing as the bundle costs $150 at most retailers. 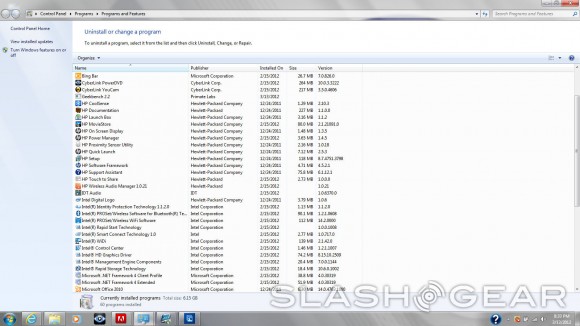 Otherwise Windows 7 Home Premium is the same as it ever was – if you’ve used any variant of Windows 7, you’ll be right at home. It is the 64 bit version, so if HP ever offers more than 4GB at the time of purchase you’ll be able to make use of it right out of the box. Aftermarket upgrades are neither supported nor recommended. As with just about any machine with a current-gen processor and plenty of RAM, the software is responsive and fast, at least on the “clean” installation.

The base Envy 14 Spectre that we tested comes with a 1.6Ghz Intel Core i5 processor, 4GB of DDR3 memory and a 128GB SSD drive. This should be more than enough for everything but the most intensive of media tasks. No one’s been able to cram discrete graphics into an ultrabook form factor yet, so current high-end gaming is out, but the Intel HD 3000 series should handle older or simpler games well enough.

I did notice that the boot up time for the Spectre is downright amazing, even when compared with the rest of the ultrabook crop. From a cold boot (not sleep or hibernation) the machine gets to the Windows login screen in just over 25 seconds. Restores from sleep were basically instantaneous. For the road warrior who often needs quick access to the full power of a PC, that’s a godsend, and almost certainly thanks to a high-quality SSD, in this case made by Samsung.

If you want a more powerful option, the higher configuration currently offered by HP uses a Core i7 processor and a 256GB SSD, but the same 4GB of memory. If you want the faster processor and more space, you’d better be willing to pay for it: the higher tier is a $500 premium over the base model.

The small form factor of the Envy obviously limits your options when it comes to disc-based media, but beyond that small limitation it’s an entertainment powerhouse. The combination of that fabulous screen, Beats audio, and powerful if not fantastic speakers make for an enjoyable experiences for streaming video and music. And for the constant traveler, having both DisplayPort and a full-sized HDMI-out really broadens your options for presentations of movies. 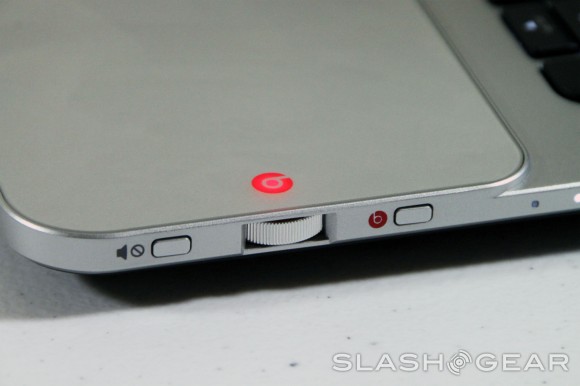 With that large, high-res screen and a relatively powerful processor, I was afraid that the Spectre would be yet another poor entry in the ultrabook battery department. Not so: across three separate tests with the screen at half brightness and doing my regular regimen of heavy browsing and emailing, I managed battery times of 6:23, 6:37 and 6:39. While not the best battery life out there by a long shot (that goes to HP’s own Folio 13) it’s plenty for a cross-continental plane trip or an extended session of work in a coffee shop devoid of outlets. On that note, HP continues to offer three-prong plugs in its adapters – a shame. But on the plus side, the adapter has a built-in USB charging port for giving your phone a jump without turning on the computer.

Without a doubt, the HP Envy 14 Spectre is one of the best ultrabooks we’ve ever tested. Solid performance, unique style, plenty of inputs and a gorgeous high-resolution screen make it a joy to use. This is the first ultrabook that’s seriously tempted me to give up my hulking full-sized daily driver laptop, because there really are no compromises, so long as you can live without a disc drive and down’t mind giving the glass lid a wipe down every once in a while. 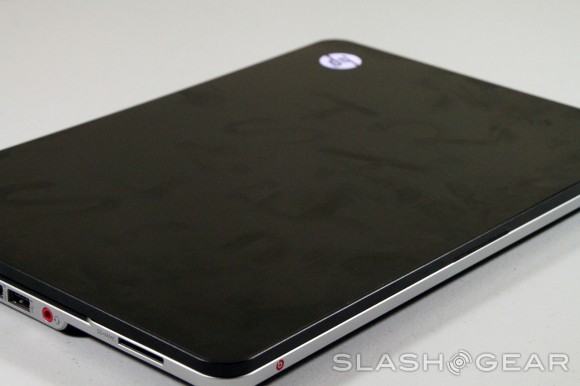 However, all this luxury and utility comes at a price – literally. At $1399, the Envy 14 Spectre is also the most expensive ultrabook we’ve tested, coming in far above the commonly expected $1,000 entry. It’s worth every penny, mind you – but you’ve got to have the pennies on hand, and be willing to put them towards a machine that you hope will last several years. With the current pace of advancement in the ultrabook form factor that may be  a hard pill to swallow. The Spectre is also considerably larger and thicker than its 13-inch contemporaries, though not to a degree that’ll make a huge difference in a carry-on bag.

The bottom line is this: there are thinner, lighter and perhaps more stylish options out there, and ultrabooks that can last longer without needing a charge. But if you like the looks of the Envy 14 Spectre, want a laptop that’s compact, flexible and has one of the best screens out there, and you’re willing to put down at least $1400 to get it, there’s nothing in my experience that should dissuade you. Spend your money, and you shall not be disappointed.

Check out the video hands-on below: 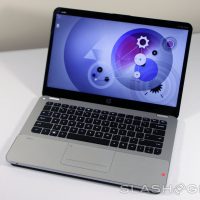 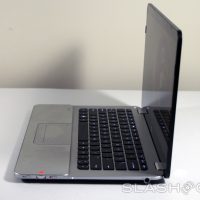 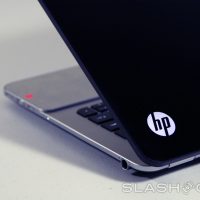 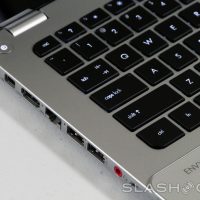 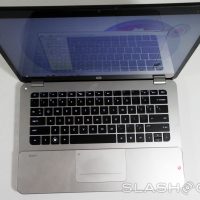 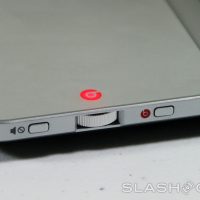 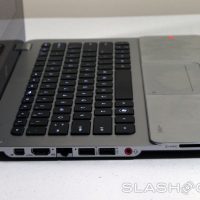 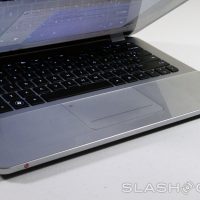 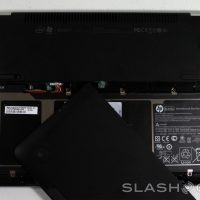 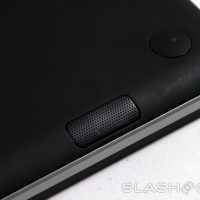 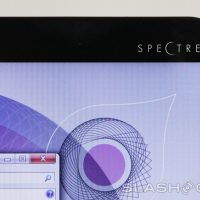 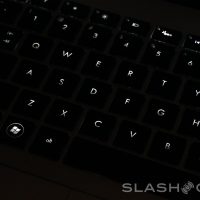 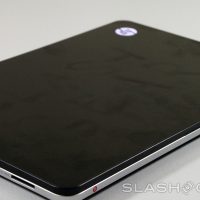 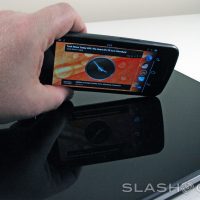 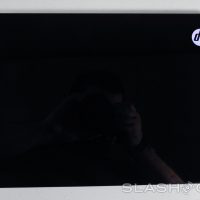 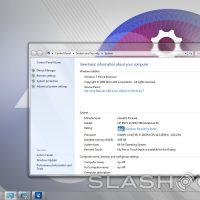 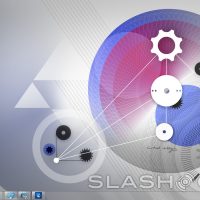 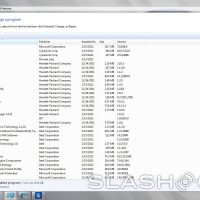