We’ve seen it teased and we’ve seen the first photos, but today Dell is finally giving us the skinny (pun intended) on the thinnest notebook ever – the Dell Adamo XPS. The 9.99 mm thin notebook, which will be shipping in time for the holidays, will inevitably be compared to Apple’s Macbook Air and no doubt it is thinner, but the starting $1,800 price tag won’t make it cheaper.

To say the Dell Adamo XPS is thin is the understatement of the year. Both times I have seen it in person I have been equally as shocked at how freaking slender the notebook really is and just how amazing it looks. Measuring 13.4 x 10.8 x 0.4-inches and tipping the scales to 3.2 pounds, it was like carrying around a legal sized notepad in the crook of my arm. (The Macbook Air is taller at .7 inches at its thickest point, but does weigh a minuscule 0.2-pounds less). How is it that Dell accomplished creating the almost emaciated Adamo XPS, you ask? The answer lies in the notebook’s completely radical design. Its keyboard folds into the display allowing it to basically disappear when it is closed.  This is accomplished with a totally different hinge creation; the hinge is actually beneath the system which causes the keyboard to be propped up, but more on that soon. Either way, it is as crazy as it sounds!

Of course, that thinness comes with some sacrifice. The notebook only has two USB ports (one more than the Macbook Air!), a DisplayPort and a headphone jack.  An Ethernet and DVI adapter will come in the box and a good old external optical drive will be sold separately. 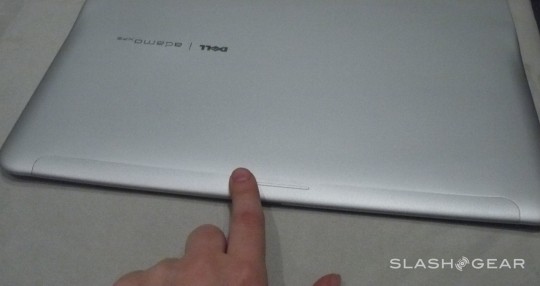 Clad in all aluminum there is no doubt that the futuristic system has a similar look to its long lost twin the Macbook Air, but the notebook has more pizazz or gimmicks, whichever you decide. Along the front of the lid is a “capacitive latching device” that unlocks the notebook. Seriously, the notebook will not unlock unless you rub a finger across the strip. It is totally James Bond, and is cool at first but I’m thinking it will get annoying to have to rub your finger on this strip every time you want to open your laptop (the whole process takes about 7 to 10 seconds). And don’t think it is some sort of security feature; anyone’s finger can unlock the lid.

When you finally do unlock the key to the Adamo XPS’s chastity belt you are greeted by a glossy 13.4-inch 1266 x 768 resolution display and an elevated keyboard. When I placed the notebook on a table the keyboard  was propped up, much like a desktop keyboard, and was insanely comfortable to type on. The keys themselves are coated in metal and felt really solid. Putting the laptop on my lap while sitting back on a couch wasn’t as cumbersome as I expected and it didn’t tilt as I typed on it, though I did have to adjust the screen angle ever so slightly to get everything at the right angle. As for the trackpad, it seemed pretty spacious and I think Dell may have finally have gotten it right by leaving out the multitouch failures and integrated mouse buttons.

The Adamo XPS is clearly the front runner in the best looking laptop competition, but will it also be about performance? All signs point to yes. The notebook doesn’t have a Intel Atom processor like the Sony X Series (and every other netbook on the market). Instead it has a dual-core 1.4GHz Intel Core 2 Duo ULV processor, 4GB of RAM and a 128GB solid-state drive with Windows 7 Premium (64-bit). The notebook itself should be a decent performer, though it seems its battery life won’t be as strong as some other ULV notebooks on the market. With its included three-cell battery (which can be swapped out) it is rated for just over 2 hours of runtime.

The question on everyone’s mind: what the heck will it cost!? That’s a good question and though Dell is answering most of our questions with the official specs of the Adamo XPS they are still leaving the price out of the conversation. We were told the notebook will start at $1,799 (including the 128 GB SSD, three-cell battery and VGA and Ethernet dongles). Funny, that is just as much the Macbook Air with its faster processor and NVIDIA graphics. But hey, the Air doesn’t have the design of the Adamo XPS, an awesome propped up keyboard, or require a finger stroke to open it.