NASA’s Curiosity rover has been busy with its drill again, and analysis of the second sample of Martian rock is already turning up some unexpected conditions back when the red planet supported liquid water. Curiosity put its low-percussion-level drill into play for the first time last week, carving a chunk out of a site known as “Mojave 2” at the base of Mount Sharp, and feeding it in powder form into its Chemistry and Mineralogy (CheMin) instrument. Turns out, even though the analysis isn’t finished yet, there are already signs of a surprising amount of jarosite, to a degree that suggests Mars was – at least in parts – a whole lot more acidic than predicted by earlier testing.

Jarosite is an oxidized mineral, made up of iron and sulfur, and known to form in acidic environments. It’s also present in far greater amounts than in the sample previously obtained at Confidence Hills, where Curiosity had been drilling back in September.

Mojave was picked as the new site primarily because of the unusual conditions of the rock surface. Slightly smaller than grains of rice, the “slender features”, as NASA refers to them, led to speculation that they could be evidence of salt-mineral crystals or something else. 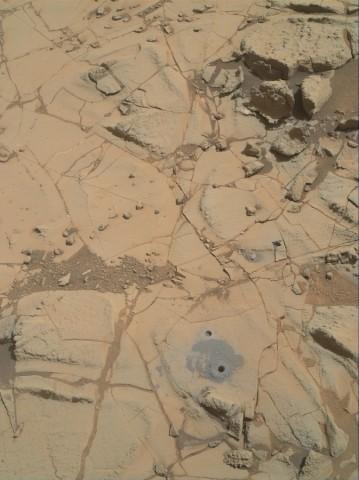 Unfortunately, during drilling the surface layer shattered, which means NASA will have to steer Curiosity elsewhere in order to figure out what, exactly, they might be. That’s despite the engineers at the Jet Propulsion Lab responsible for Curiosity’s operations turning the drill settings down considerably.

In fact, it took just ten minutes to drill down around 2.6 inches, the rock proved to be so soft.

There are still plenty of questions surrounding just why the jarosite levels are higher. For instance, it could be because more acidic water at the Mojave 2 site was simply part of the environmental conditions there back when the sediments were first deposited; alternatively, they may have been introduced later, by a secondary fluid that soaked the site.

Still to come are the results from the Sample Analysis at Mars (SAM) instrument which has also had a dose of Mojave 2 dust, and which is expected to spit out a chemical assessment of its make-up.