NASA’s plucky Martian rover Curiosity has reached its next milestone, arriving at the foot of Mount Sharp after taking an unexpected detour across Mars. The traveling science lab will now gradually make its way up the mountain, which is more officially known as Aeolis Mons and rises to around 18,000 feet, exploring geological layers as it goes.

That way, NASA says, the rover will be able to piece back through the “different chapters in the environmental evolution of Mars.”

It’s not been a straightforward journey for the rover, however. NASA’s Jet Propulsion Lab had to change the route that Curiosity took to reach Mount Sharp from its original plans, after finding that unexpectedly sharp terrain was causing unexpectedly high degrees of damage to four of its wheels, and as a result potentially shortening the rover’s lifespan.

In fact, the previous goal was to take Curiosity to Murray Buttes, but further analysis of some of the results coming back from the rover and from the Mars Reconnaissance Orbiter led NASA to opt for a different terrain, the Murray Formation, instead. 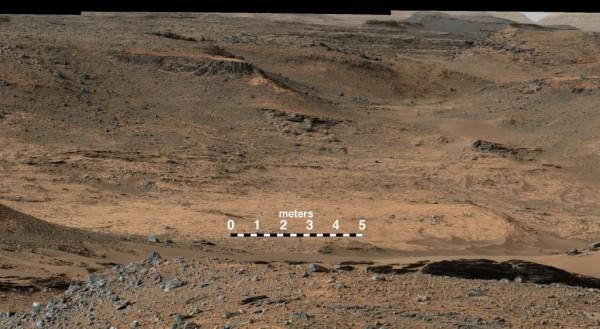 Curiosity has been on Mars for more than two years now, hunting for evidence that the red planet could once have supported microbial life.