NASA’s Mars exploring Curiosity rover has begun drilling on the Martian surface, with a test run identifying a good spot to take new rock samples. Curiosity had been hunting down a promising location over the weekend, using a variety of tools to dust down and otherwise prepare the location NASA’s Jet Propulsion Lab has dubbed “Windjana” after a Western Australian gorge.

The cleaning – using a special wire-bristle brush which the JPL has dubbed “the Dust Removal Tool” – exposed a point of fine-grained sandstone with some intriguing textures.

“Its true color is much grayer than the surface dust,” science team member Melissa Rice said of the sample point, “and some portions of the rock are harder than others, creating the interesting bumpy textures.” A “mini-drill” process scoured away roughly 2cm of the rock to give NASA more insight into whether it would be a worthy place for Curiosity’s third drilling session of its time on the red planet. 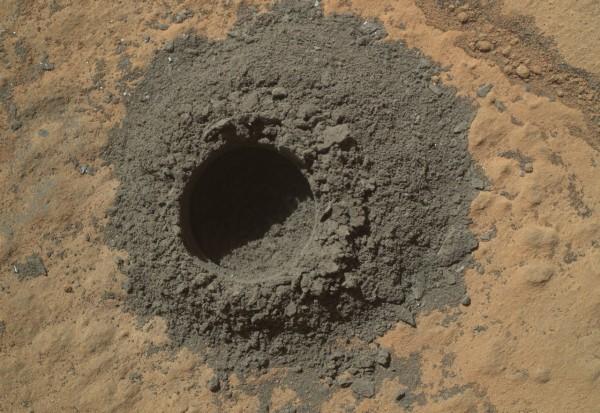 Material mined by Curiosity’s hammer drill assembly is fed into an onboard lab of tools for assessment and analysis. In the case of the first two samples, taken around 2.5 miles away from Curiosity’s current location, that exposed signs of a former lakebed that led NASA to suggest Mars might – billions of years ago – have been able to support microbial life.

Want a Mars rover of your own? LEGO’s Curiosity set is officially coming

Whether or not this new rock will unlock similarly interesting details about Mars’ history remains to be seen, with NASA and the JPL team deciding over the coming days whether to go ahead or find a different spot.

Rock digging isn’t the only thing that Curiosity has been busy with while on Mars. The rover has also been beaming back high-resolution photos, including showing Earth as a bright “evening star” from a perspective no human eyes have ever witnessed.