The first photo of the Curiosity lander making its final journey through the Martian atmosphere has emerged, a rare image of the huge parachute used to slow the Skycrane and its expensive cargo. The picture was captured by the Mars Reconnaissance Orbiter (MRO), and though low-resolution clearly shows the dangling cradle beneath the 16m wide “supersonic parachute” that slowed it from around 578 m/s to 100 m/s.

After that point, the parachute was detached and Curiosity and the Skycrane used rockets to level off and slow to the point where the rover could be carefully lowered to the Martian surface. The full landing process – which was all done automatically, since time delays in radio transmissions between Mars and Earth meant direct remote control was impossible – is detailed here. 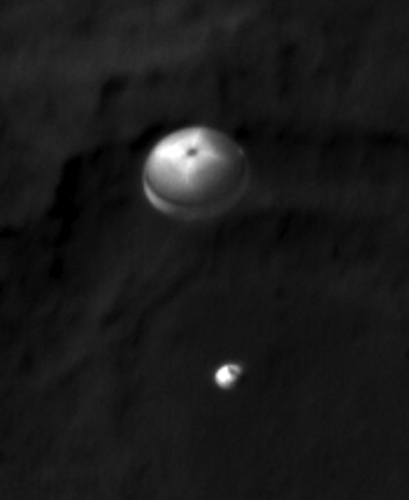 This first photo lacks detail, but there’s far more impressive media to come. Part of the equipment Curiosity carried was the Mars Descent Imager (MARDI), a full color camera which fired off four frames per second during the landing. The ensuring video is expected to be beamed back to Earth in roughly a week’s time.

NASA is expected to release more photos from the Mars Reconnaissance Orbiter later in the day, at which point we’ll hopefully get a better view of exactly what went on during that tumultuous “Seven Minutes of Terror.” As for what comes next, check out our guest editorial by NASA engineer Gavin Mendeck on Curiosity, the Mars project and the future of space exploration.