Curiosity gets curious: Rover lifts head and looks around Mars

The gradual unfurling of NASA‘s Curiosity rover continues, with the head of the Martian explorer ‘bot now fully deployed and taking photos, albeit not at final quality. The Rover itself – or its tweeting human representative on Earth – announced the successful erection with a new photo from one of the Navcams mounted on the head, which will eventually be used to snap 3D imagery for navigation and control. However, there’s far more pixels incoming. 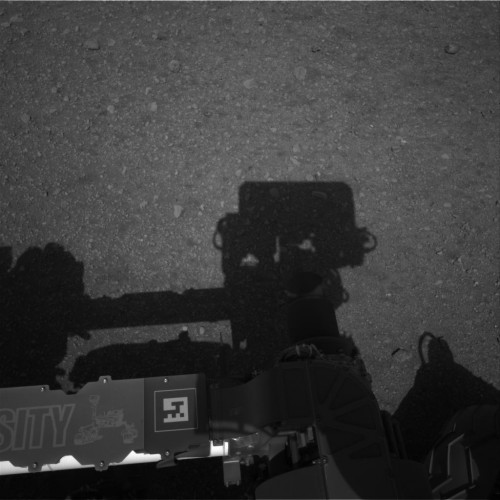 However, the MastCams aren’t expected to be deployed until roughly a week after Curiosity’s landing. That’s down to a combination of dust in the environment and progressive testing; only earlier today did the rover whip off its Hazcam dust covers and send back some unblinkered 3D shots of the Martian terrain.

If you’re wondering about the QR-code style glyph in the bottom of the image, that’s apparently part of the calibration process for Curiosity’s head. Today NASA is also due to establish direct communications with the rover, using its high-gain antenna.