Self-isolation has a lot of people paying extra attention to just how welcoming their home is, and if cleaner air and fewer smells are important then an air purifier is a good place to upgrade. Coway’s Airmega AP-1512HHS takes one of the company’s most popular models, the AP-1512HH Mighty, and gives it a WiFi upgrade like the more expensive Airmega purifiers.

It’s rated for up to 325 square feet like the Mighty, so think single-room rather than a whole home or floor. Actual filter performance hasn’t changed either, since the new AP-1512HHS uses a similar filter pack as the Mighty and the 200M too. It’s now a double-whammy of a filter, to be entirely precise.

New is a honeycomb activated carbon filter, which is designed to capture odors like cooking smells and chimney smoke. It replaces the dual carbon filters in the Mighty/200M filter pack, and Coway claims they do better at collecting VOCs and gases, though I noticed no difference between the two in practice. It’s paired with a HEPA filter, which Coway says can capture 99.97-percent of airborne alleges as small as 0.3 microns in size. With typical use you can expect to replace it on a yearly basis; it’s $69.99 direct from Coway, but if they’re anything like the Mighty/200M filters you can probably expect that, by the time it comes to replacing them, you’ll be able to find them cheaper elsewhere online. 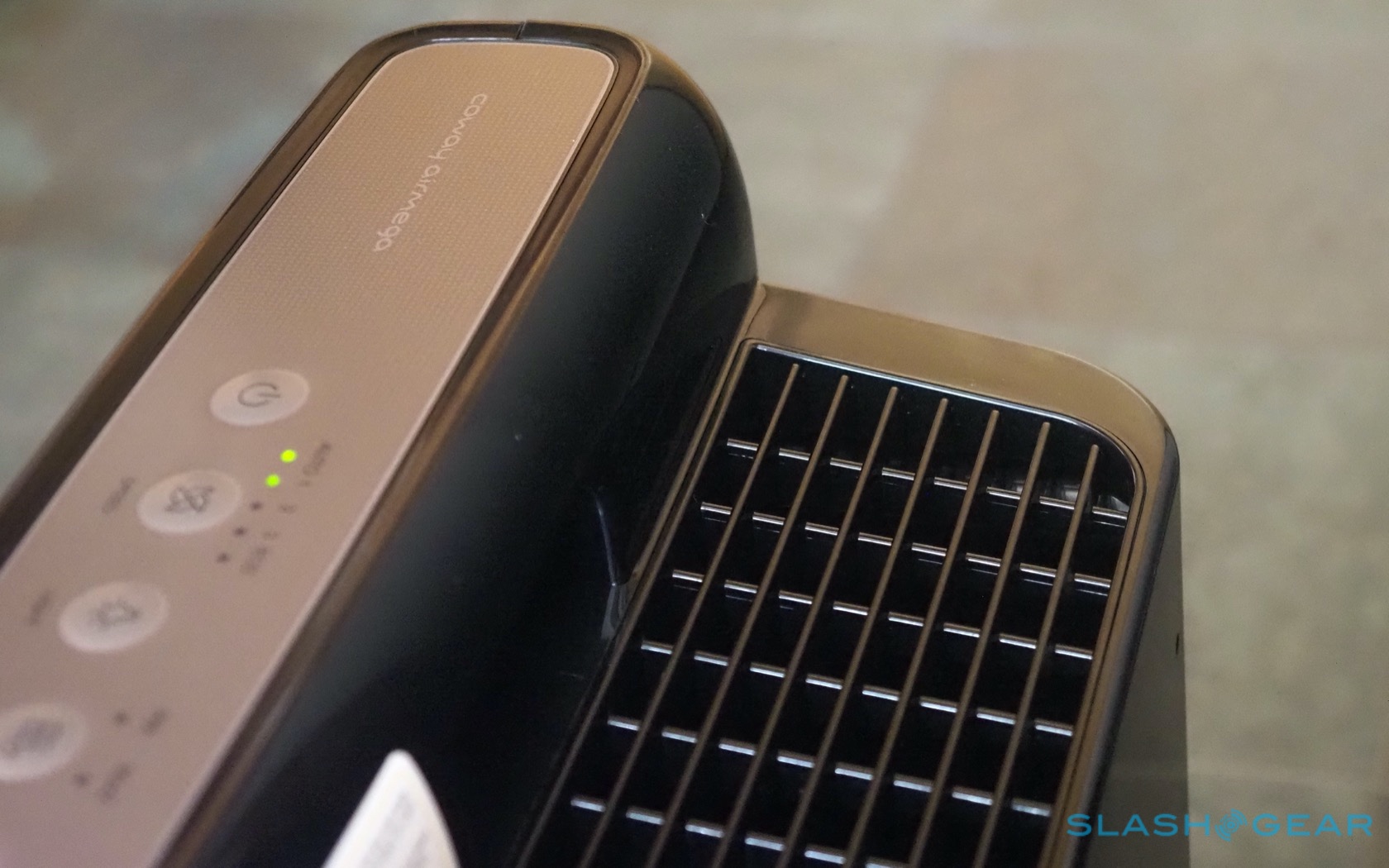 Clipping those filters into place is a dust and lint screen. That needs attention far more frequently – by default it’s set to notify you every three weeks – but you can wash it yourself so there’s no cost implication. Our cat leaves a trail of shed fur behind her wherever she goes, and the AP-1512HHS does a good job of capturing it. I have no complaints about the Airmega’s ability to snag smells, either: cooking odors are quickly dispersed.

Setup is straightforward, though with a few caveats. After you unwrap the filters and slot them into place behind the removable front panel, then plug the AP-1512HHS in, it takes a minute or two for the WiFi radio to power up. Coway’s app walks you through connecting it to your home network.

It’s important to note that the air purifier is only compatible with 2.4GHz WiFi networks. If you’ve got your router set to 5GHz-only, it won’t be able to connect. I also had to go through the pairing process twice before it would work properly, though since then it has always reconnected after I’ve had it unplugged. 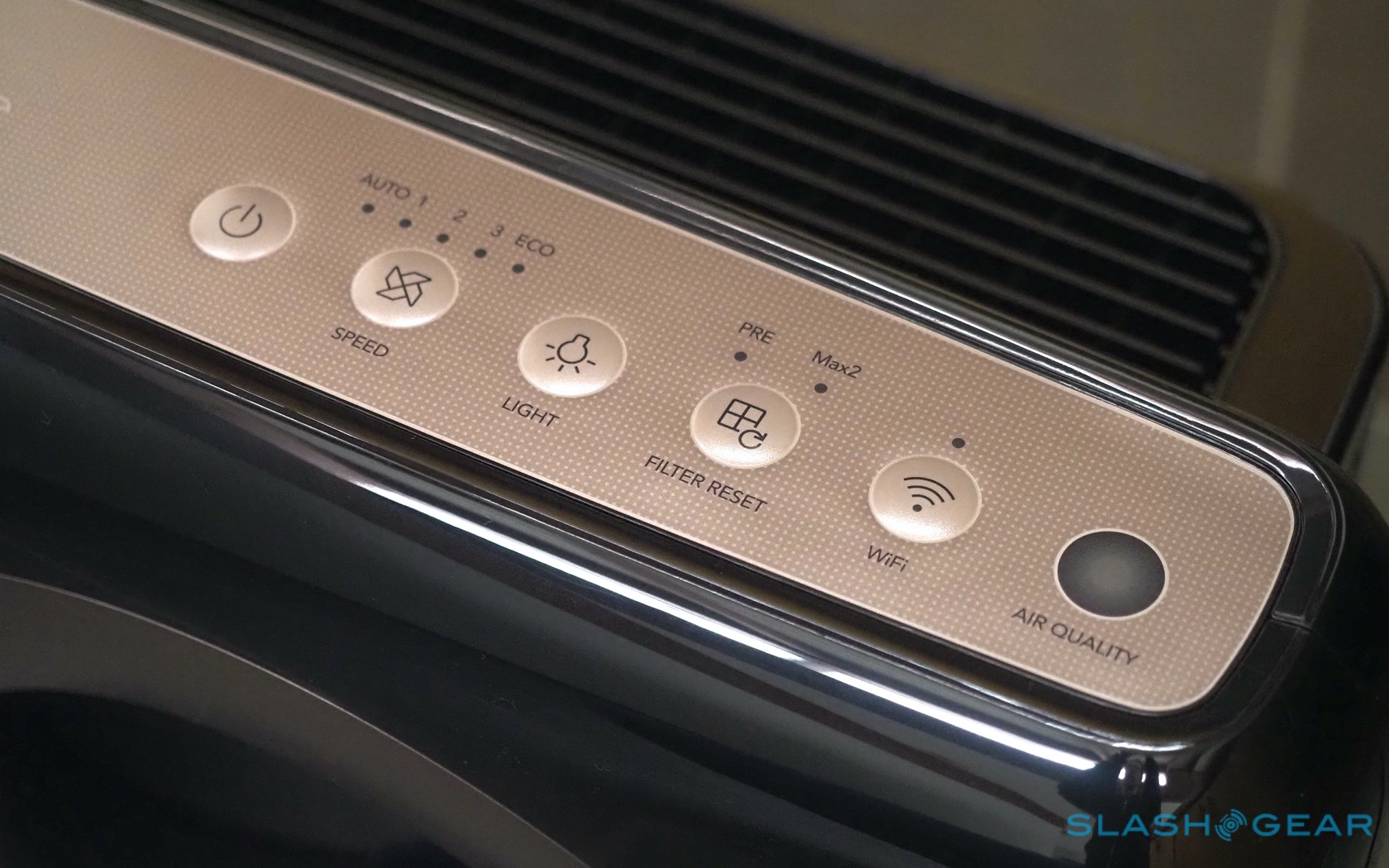 Coway’s app is the same as the larger, more expensive Airmega 400S. You can access all the same controls as on the top-panel of the purifier, including choosing fan speeds, putting it into auto or eco mode, and setting the shut-off timer. The app is also where you can establish a schedule, consisting of on/off times for each day of the week, which fan speed the AP-1512HHS is set to, and whether the light is on or off.

Elsewhere in the app is the air quality monitor. That uses your purifier’s location – assuming you grant it permission – to compare indoor versus outdoor quality. The data is relatively high-level, though: a rating of good, unhealthy, or very unhealthy. You can’t see specifics of things like CO2 or particulate levels, humidity, or temperature.

If you’re in the same room it’s easier just to look at the air quality light on the top panel, which changes color according to the current status. You can, though, turn that off if it’s too bright in your bedroom. 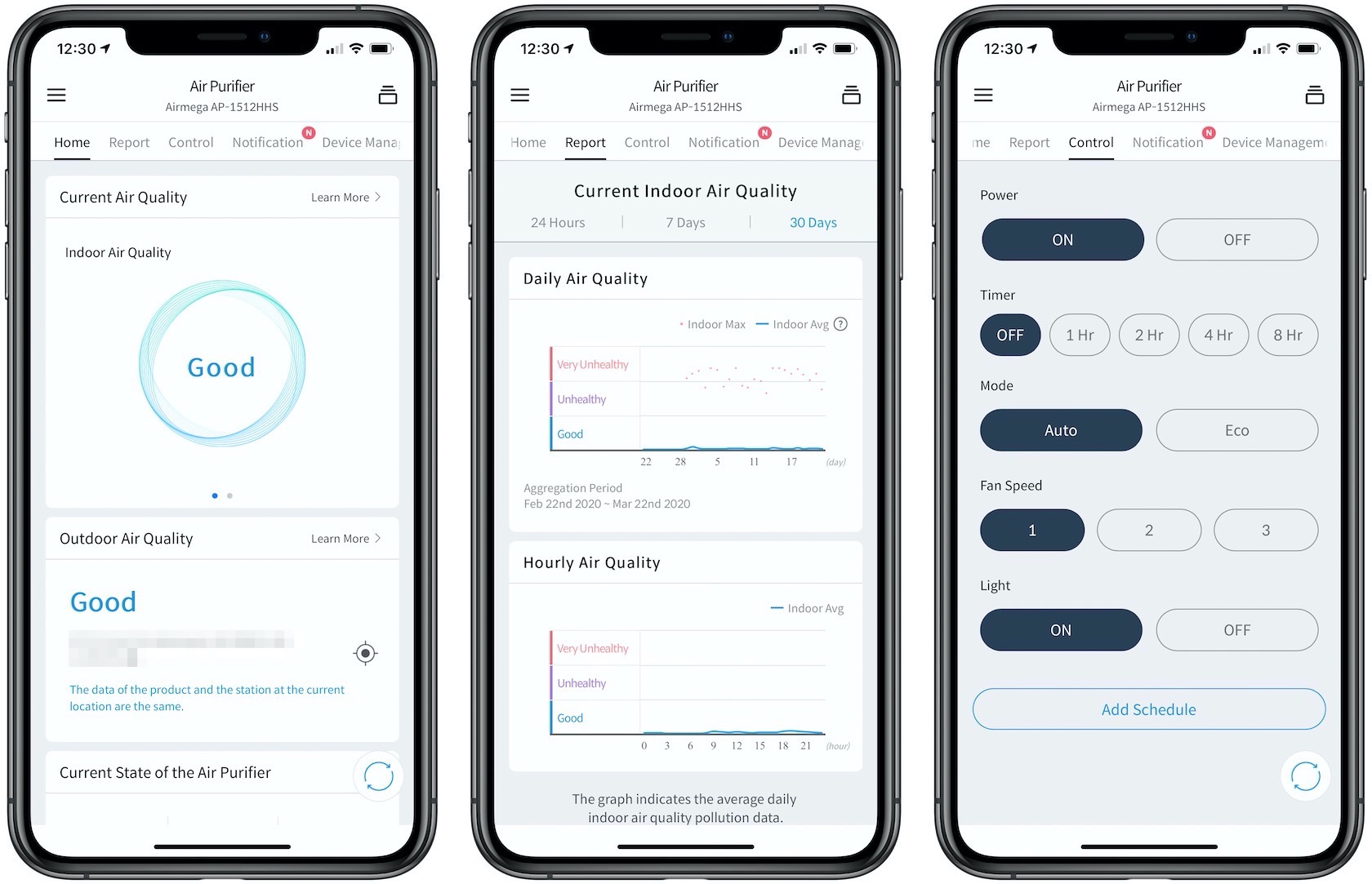 As with the Mighty, I often found myself wishing there was another fan speed in-between Levels 2 and 3. There’s a big jump in noise, the fan cranking up significantly. Another annoyance is the slow speed at which the app loads up, particularly if all you want to do is turn off the fan without getting up off the sofa.

The biggest question the AP-1512HHS faces is one which a pre-self-isolation visitor asked me: why does your air purifier actually need to be connected? Given that actual cleaning performance is the same as the non-WiFi version, it’s not unreasonable to ask. 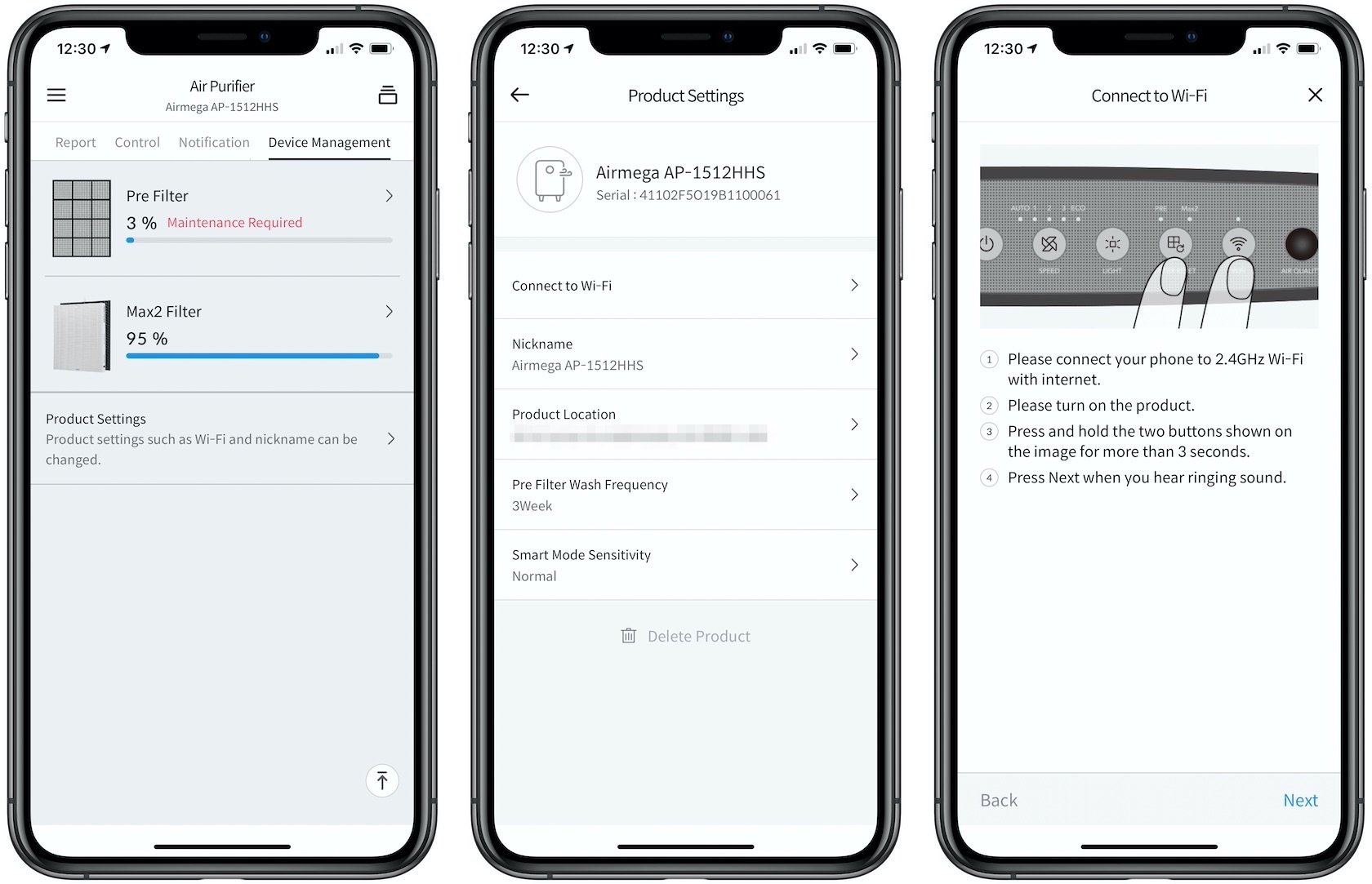 After living with Coway’s latest model, I think it comes down to how hands-off you want to be. If you can set-and-forget your purifier, leave it on auto mode, and remember to periodically check in on the state of the filters, you probably don’t need it to have WiFi. The fact that you can pick up the original Mighty for under $200 these days makes it something of a bargain.

That’s not to say the WiFi hasn’t proved its merit, though. We’ve had the AP-1512HHS in our TV room: being able to whip out the app when the fan unexpectedly kicks into high mode and turn it down manually so it doesn’t drown out our favorite show has been lazy but useful. Setting it back to auto from afar later on – because you inevitably remember when you’re out of the room – is handy, too, and you can do that via Alexa if you have an Amazon smart speaker. 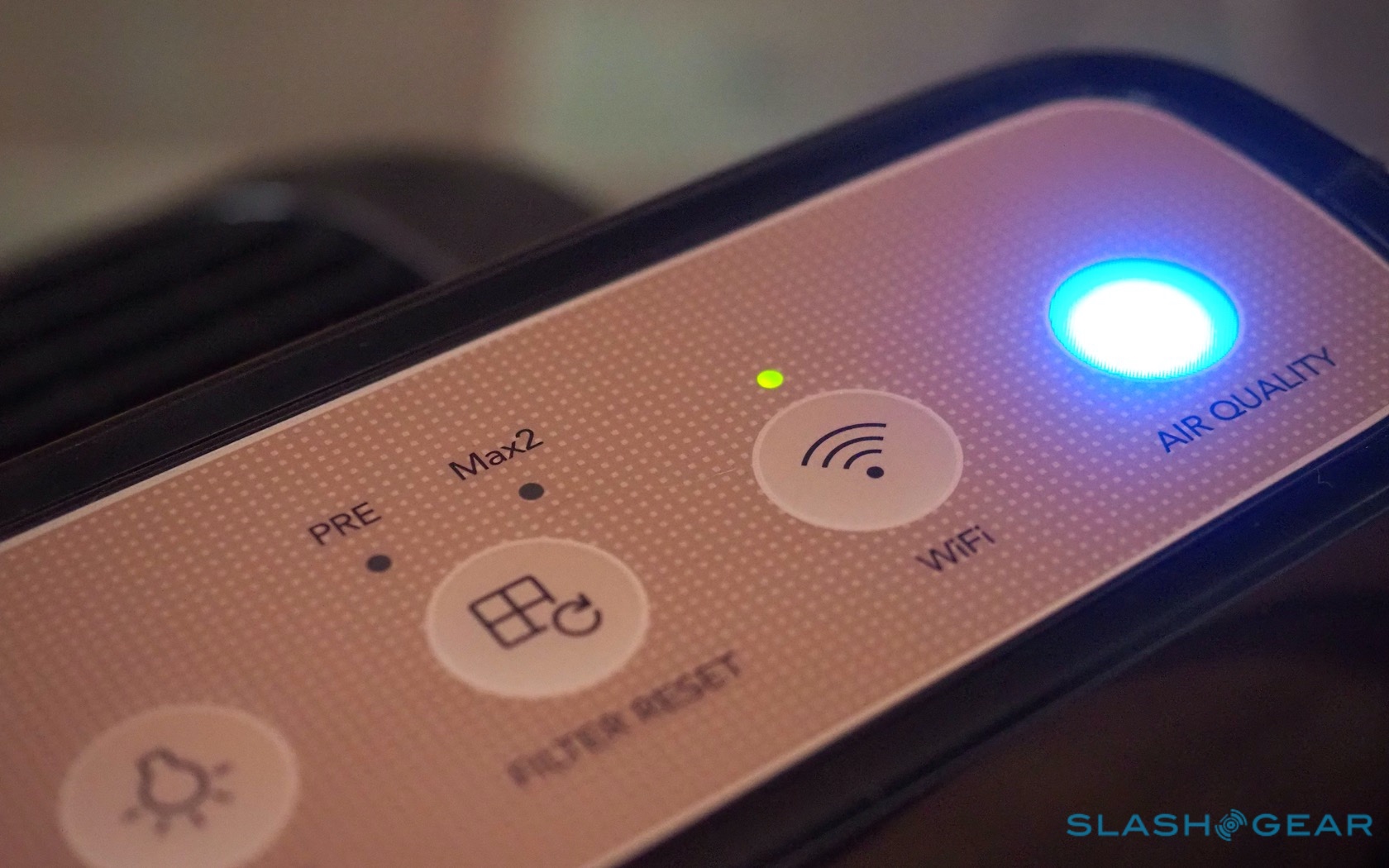 If you’re like me, and basic maintenance tasks regularly escape your memory, having notifications when the filters need attention is good, too. You can optionally set up Amazon Dash replacement as well, automatically having a new filter set ordered when the current one is nearing the end of its life.

Right now, with the Airmega AP-1512HHS having a list price of $299, those benefits will cost you about an extra $100. For that I can’t help but wish that Coway’s app was a little more full-featured about just what sort of pollutants are present, but the convenience of WiFi connectivity is definitely something I missed from the more basic Airmega 200M.