You end up thinking a lot about air quality when a thick pall of smoke has been hanging outside your windows for two weeks solid – enough to make you think that a high-tech air purifier is probably a very good addition to most homes. Coway’s Airmega 400S is one such example, combining a voracious appetite for air impurities with a host of connected features that should make it a more welcome guest. Question is, at more than $600, is it worth it?

It’s not a compact addition to your home, certainly. Standing 23-inches high with the top 15-inches square, it’s more like an end-table. Unlike that end-table, though, you can’t use the 400S to put your coffee or remote control down, since clean air emerges from the top. 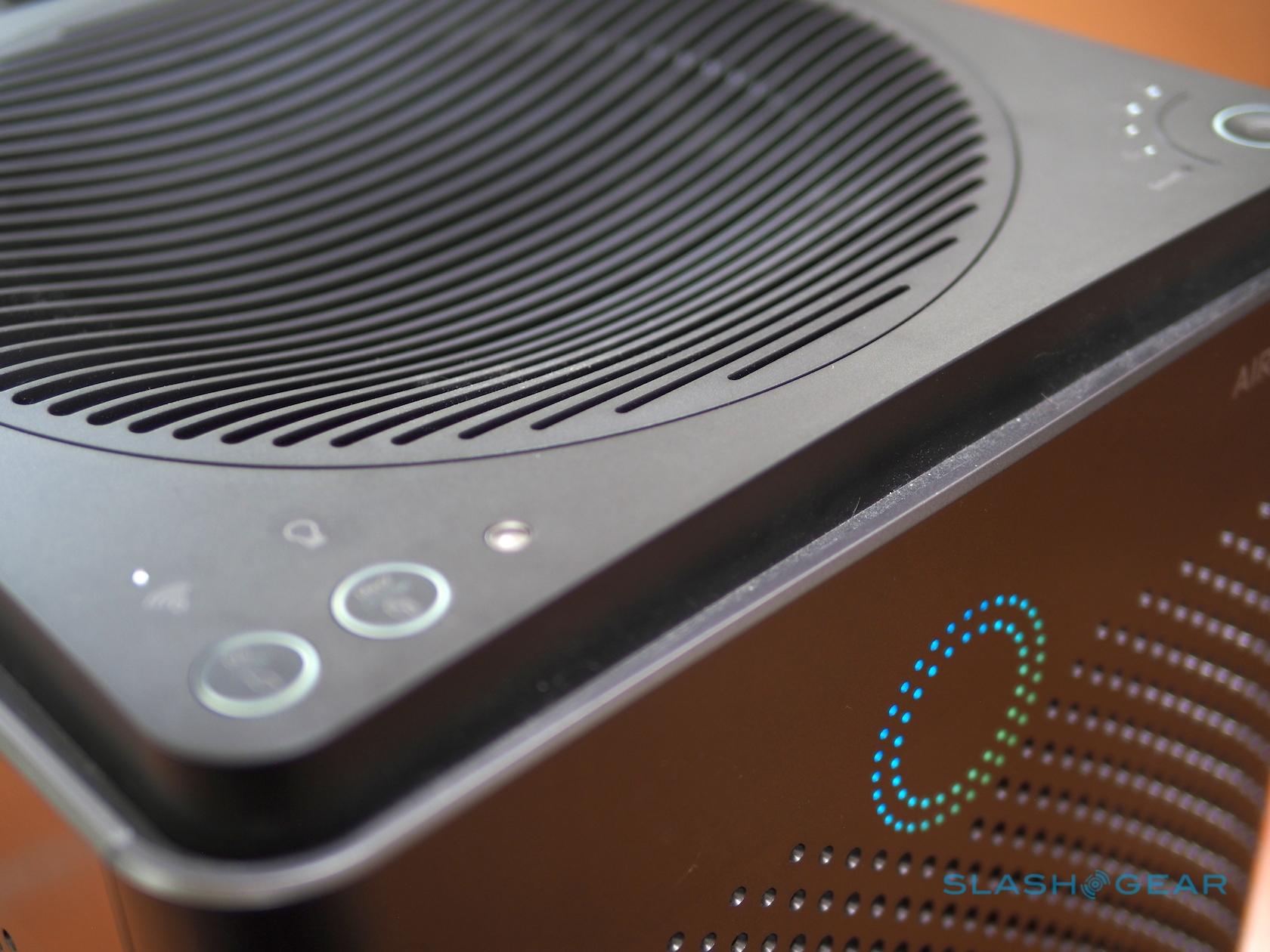 The controls are a series of touch-sensitive buttons on that top panel. You can manually switch between the four fan speeds – including Night mode – or turn on Smart Mode which adjusts automatically according to the air quality in the room. Buttons for the filters allow you to reset the replacement counts, and another toggles the LEDs on or off. That includes the multi-color ring on the front, which shows the current air quality.

The filters load in the left and right sides, behind magnetically-attached panels. First there’s the pre-filter, a micro-mesh sheet which clips into place. That’s designed to stop hair, dust, and pet fur; it needs to be cleaned most often, but that’s a simple matter of pulling it out and either wiping it down or, as I found easiest, gently vacuuming it with a soft brush attachment. 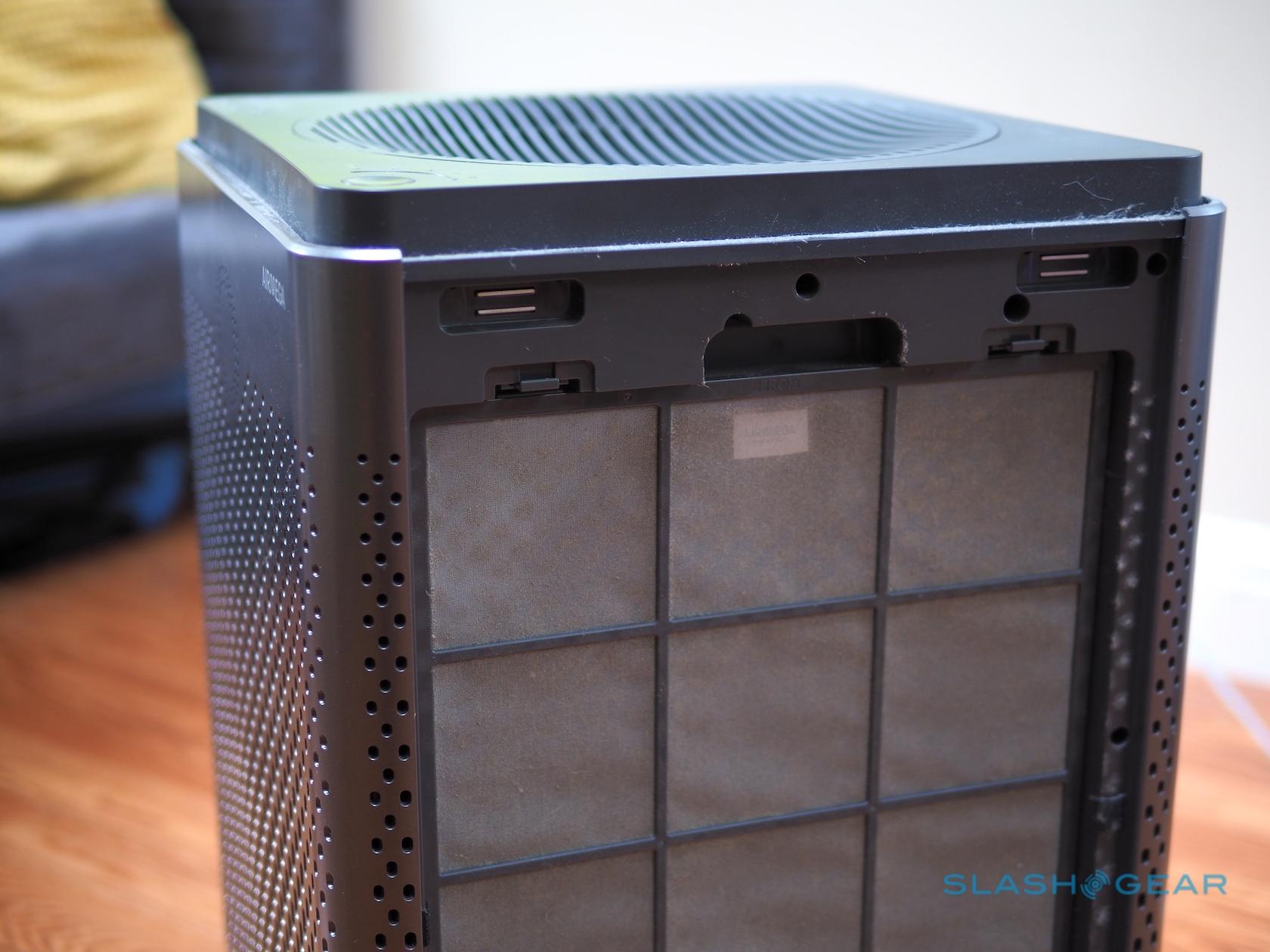 Behind the pre-filter is the Max2 filter. That’s a combined activated carbon and HEPA panel, and the two in the 400S are responsible for the main cleaning work the Airmega does. Coway says it’s capable of capturing up to 99.97-percent of the particles in the air, as small as 0.3 microns, in addition to reducing more than 99-percent of volatile organic compounds and fumes from cooking and similar. They fit snuggly into the body of the purifier. 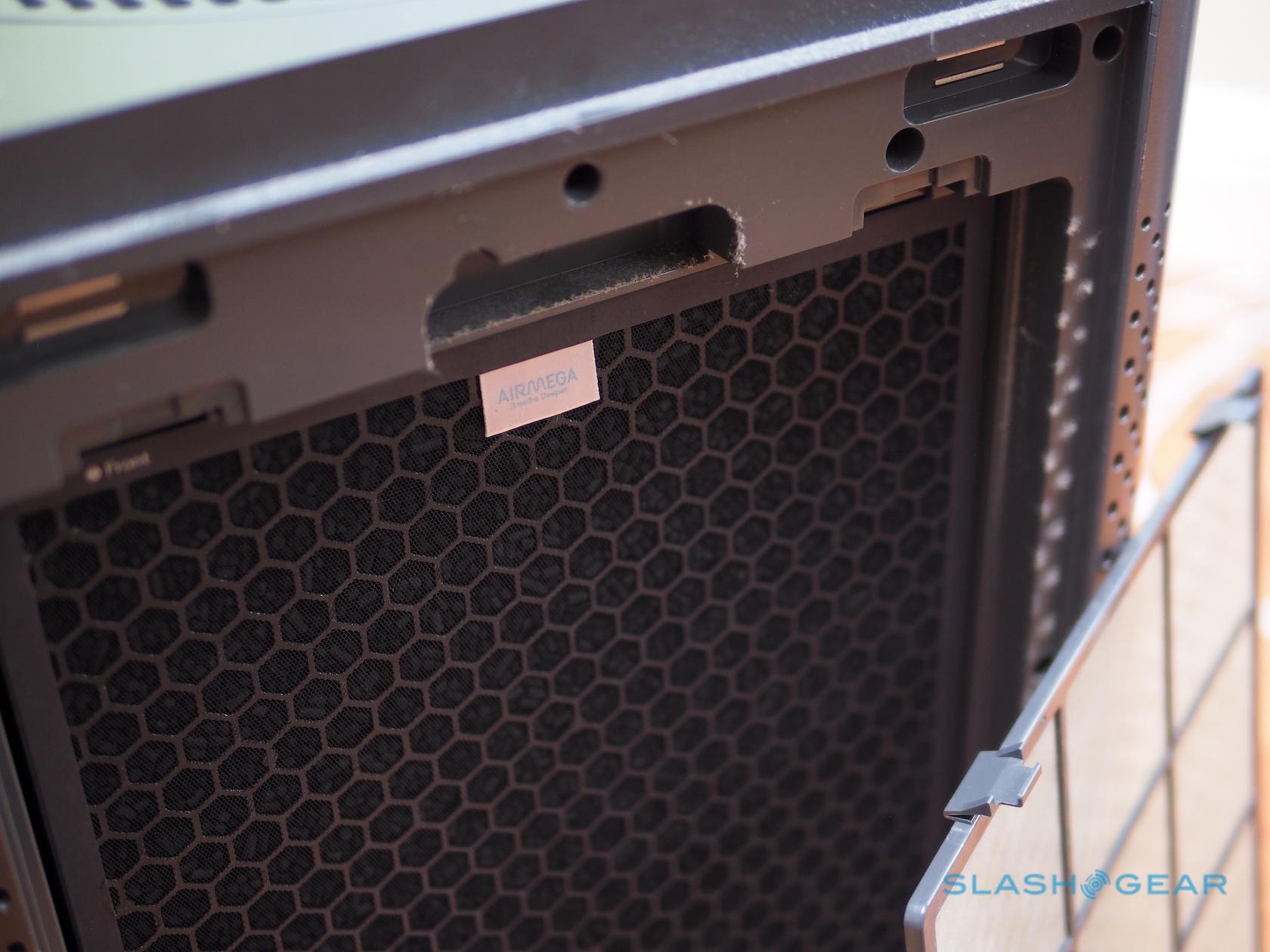 It’s these filters which add a significant chunk of the Airmega 400S’ price. Each set of two should last for around twelve months – the exact time, Coway says, depends on how much use they see – and costs $129. The Max2 filters for the Airmega 300 Series are cheaper, at around $80 a set, but they’re also smaller and, you guessed it, won’t fit the 400 Series machines.

The “S” version of the 400 Series – as with the 300 Series – is the smart model. That means it has WiFi integrated, and works with Coway’s app. Unfortunately that’s a little underwhelming.

Part of the problem is that Coway actually changed its app. The original was, in my opinion, much easier to use. Its replacement is functional – you can manage multiple purifiers from a single account, including controlling all the front panel features remotely – but it doesn’t look as elegant and it can be clunky in its operations. 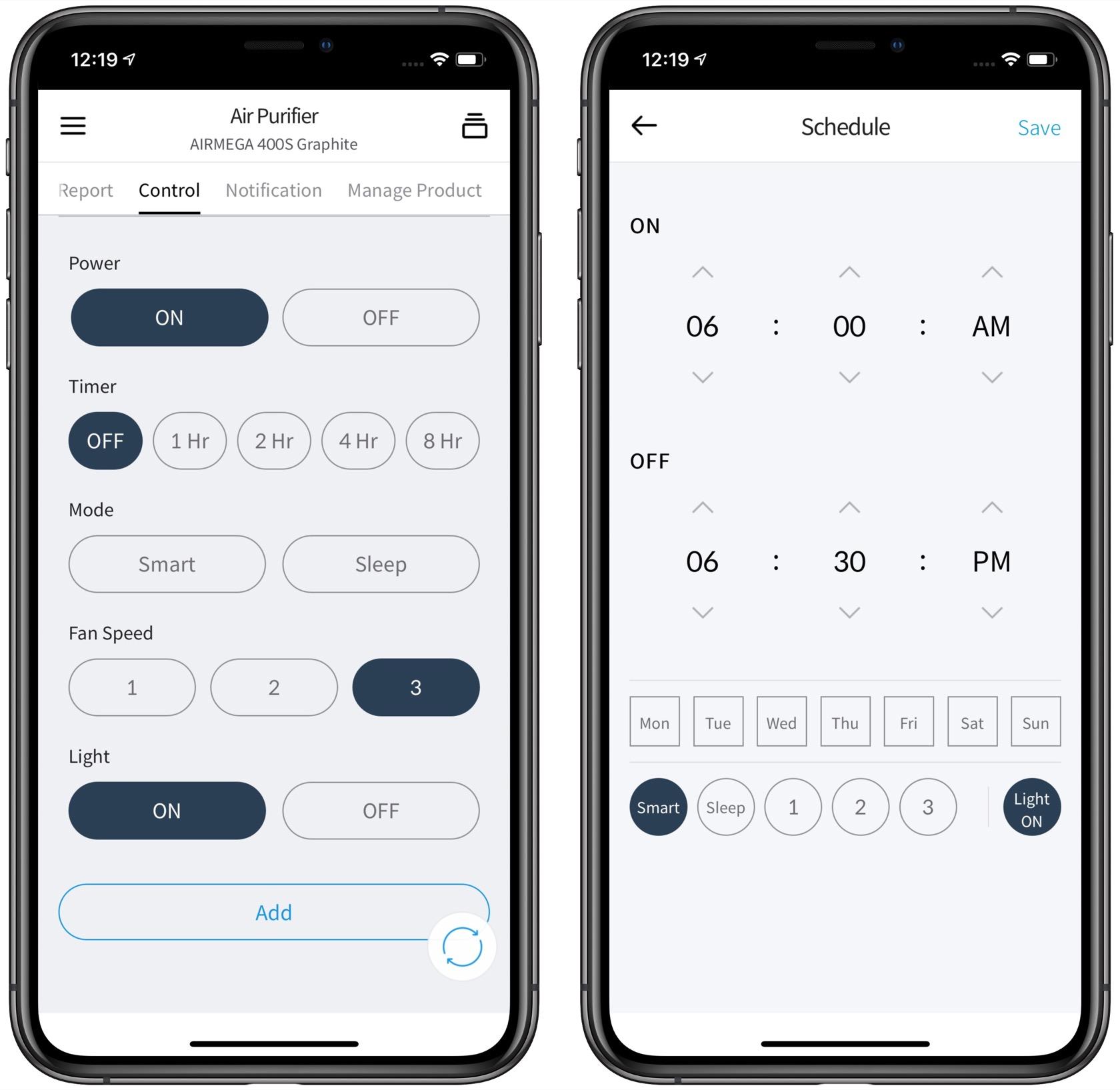 First, the good. You can choose how sensitive the 400S is in Smart mode, as well as schedule different fan speeds – including whether the lights are on or off – for different times and days of the week. The app shows a countdown of the filter life remaining, too, as well as links to videos showing how to clean or replace them. It’s useful being able to turn down the fan remotely from another room when it suddenly winds up to max speed while you’re trying to watch TV.

The 400S can ping you with notifications about air quality and filter status, too, but it can be a little vocal for my liking. With the air quality alerts turned on, I was subject to a barrage of notifications. Turn those notifications off, however, and it seems you also miss the filter health alerts. It’s worth noting that, if you shut off the lights on the purifier itself, the filter buttons – which would normally glow orange when they need attention – don’t light up, even if maintenance is required. 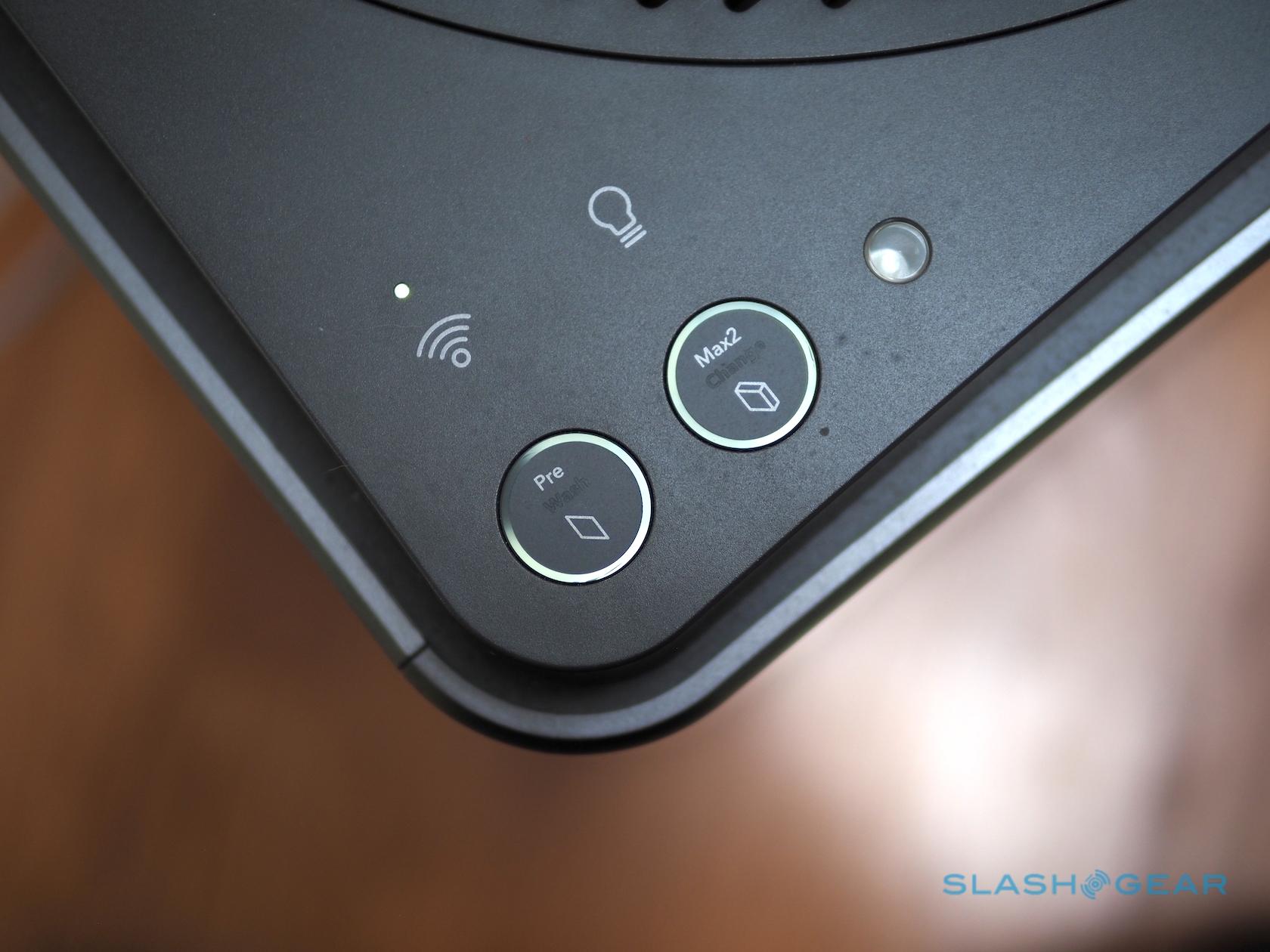 My other frustration with the app is it performance tracking. After setting your location, it’s meant to show you the current outdoor air quality levels: unfortunately sometimes it simply fails to get that data. The indoor performance, meanwhile, is broken down either by a bar chart showing the percentage of the last 24 hours that air quality was good, moderate, healthy, or very unhealthy, or a graph of that. 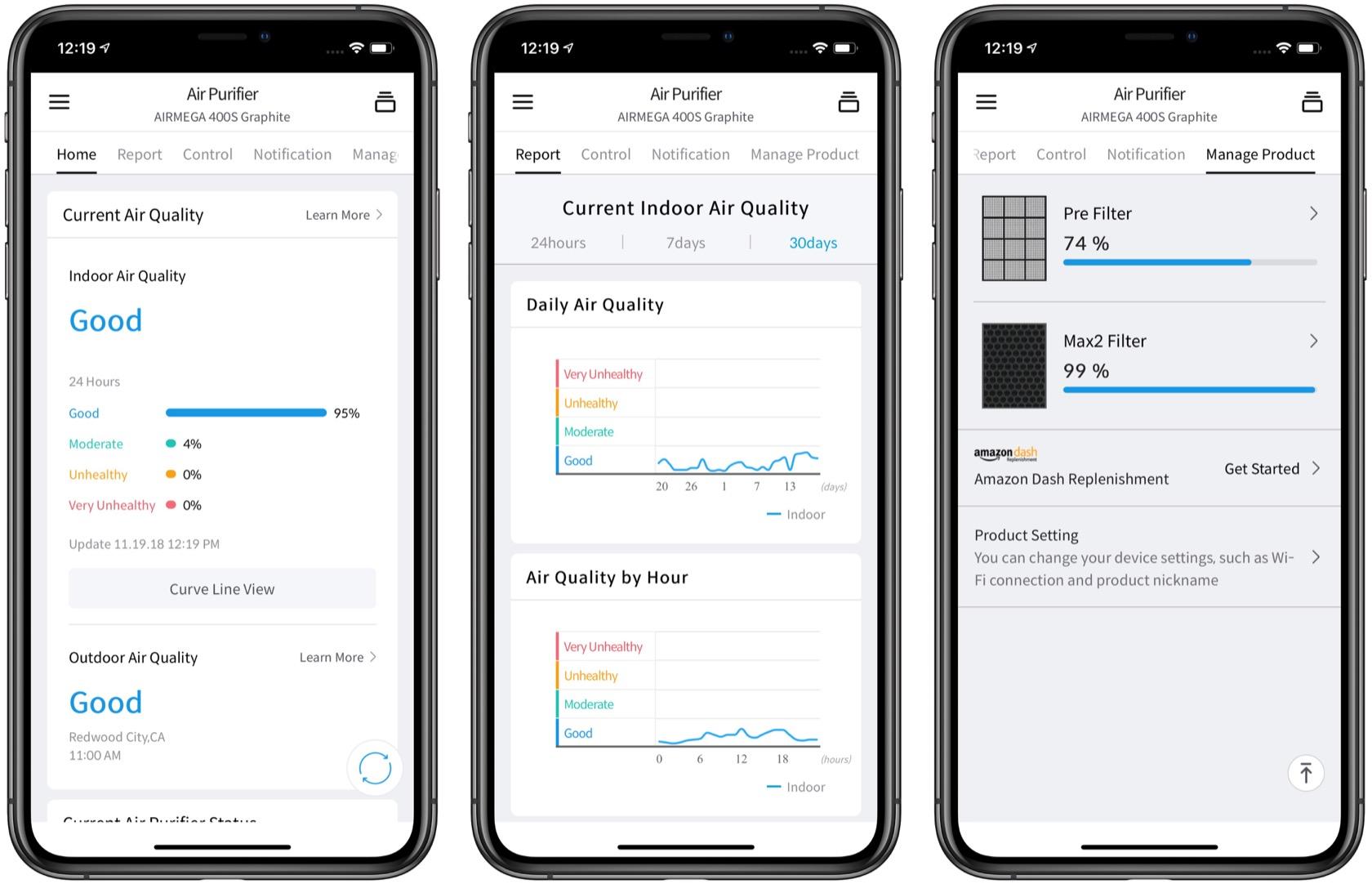 You can choose between graphs for the last 24 hours, last seven days, or last 30 days. Coway seems to be doing some serious data smoothing here, however: peaks when the 400S was churning away at its maximum, the app itself warning me that air quality levels were “very unhealthy,” aren’t included. There’s no numerical measure of API or other air quality metrics, either.

Alexa, save me from this app

There’s a way to avoid the mediocre software, if you have an Amazon Echo smart speaker. Alexa integration allows you to link the Airmega 400S – or the 300S – and control it via voice.

Update: The Airmega 400S also supports the Google Assistant, meaning you can also use voice controls with Google Home and other Assistant-powered devices.

That’s a shame, because the Airmega 400S seems to be delivering when it comes to the most important factor: cleaning the air. With numerous wildfires in California over the recent weeks, not to mention the absence of an extractor fan in the kitchen, there’s been no shortage of bad air quality for the purifier to deal with. 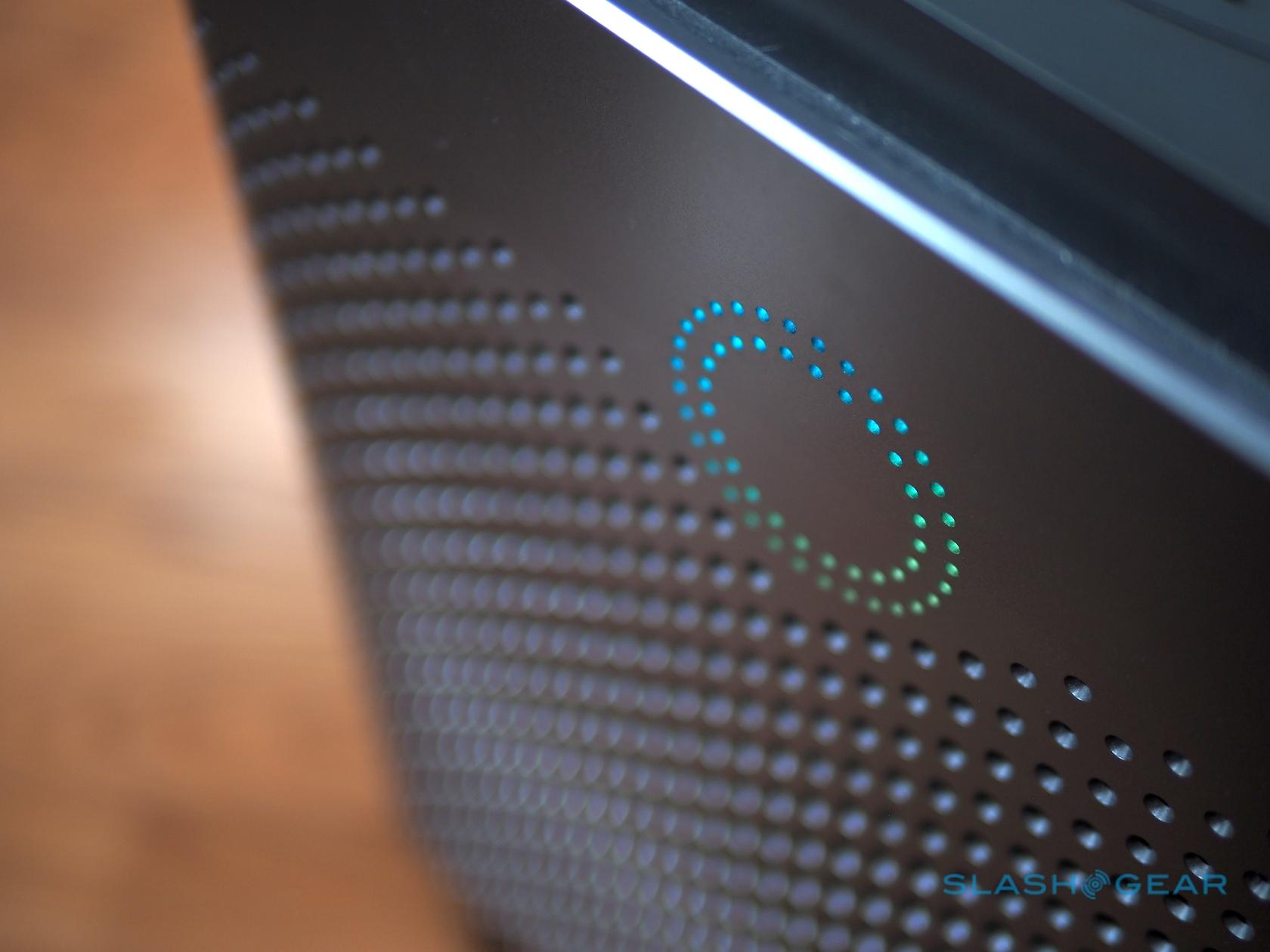 Day to day, in Smart Mode the 400S quickly picks up on when I’ve been burning dinner and cranks its fans up to max. It typically takes anything from 5-15 minutes – depending on how klutzy I’ve been – but cooking smells and smoke aren’t a problem.

I don’t have a lab with a hermetically sealed chamber to test the exact particulate-reducing capabilities of the 400S, sadly. However I did look at comparative measures using a Foobot air quality monitor. Now, it’s worth noting that the sensors in any consumer air quality instrument can be questionable: there’s a good reason that professionals use things like gas chromatography mass spectrometry.

Still, it was enough to get some comparative measures over multiple periods of testing, and while I wouldn’t necessarily count on the Foobot’s exact numerical scores, one thing was abundantly clear: the air quality was better when the 400S had been running than when it hadn’t. Combined with third-party testing that also put Coway’s filters through their paces, I’m pretty confident in saying that the air we were breathing was noticeably better than without the purifier. 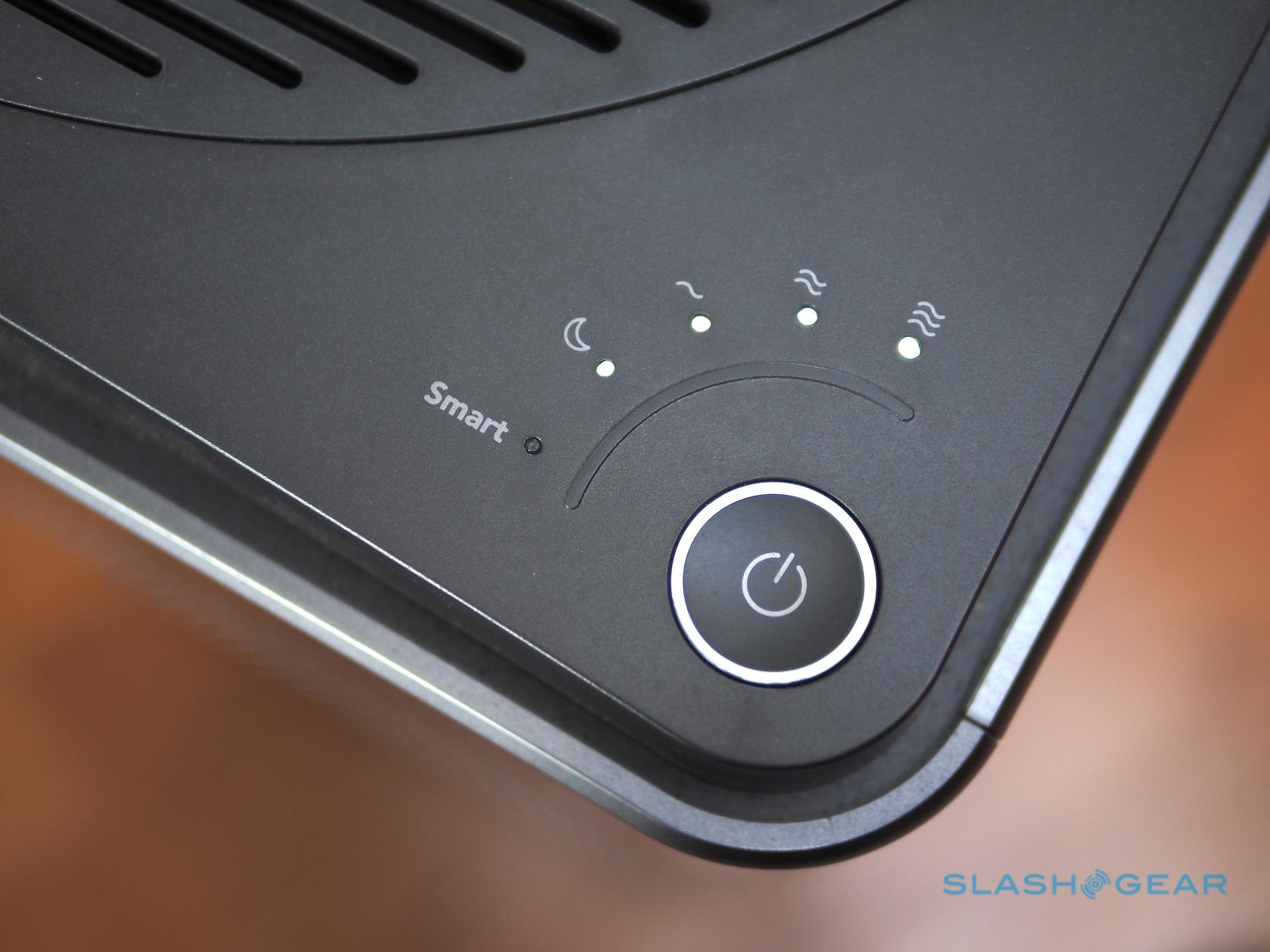 That became all the more pressing a concern with the wildfires. With warnings that air quality outdoors was well into the seriously unhealthy category, the difference in breathing inside versus out was noticeable. It’s times like those you particularly appreciate the 400S’ Night Mode, too, which keeps the fans so low that they’re almost inaudible. A light sensor turns the LEDs off automatically when it gets dark.

The other factor worth considering is just how rapidly the Airmega 400S can circulate through a room. It’s rated for 1,560 square feet, which is considerable for a purifier and helps explain the premium price. The twin fan intakes mean it can run through the air in that entire space twice every hour. Even if you don’t have a huge apartment, the pace of air cleaning means the 400S spends less time active and more time quiet, and you spend less time breathing unhealthy air.

Air quality is something you don’t typically think about – until it becomes a health issue. Suddenly, the cost of an air purifier starts to seem less problematic, particularly when the smell of burning hangs heavy in your living room or bedroom. 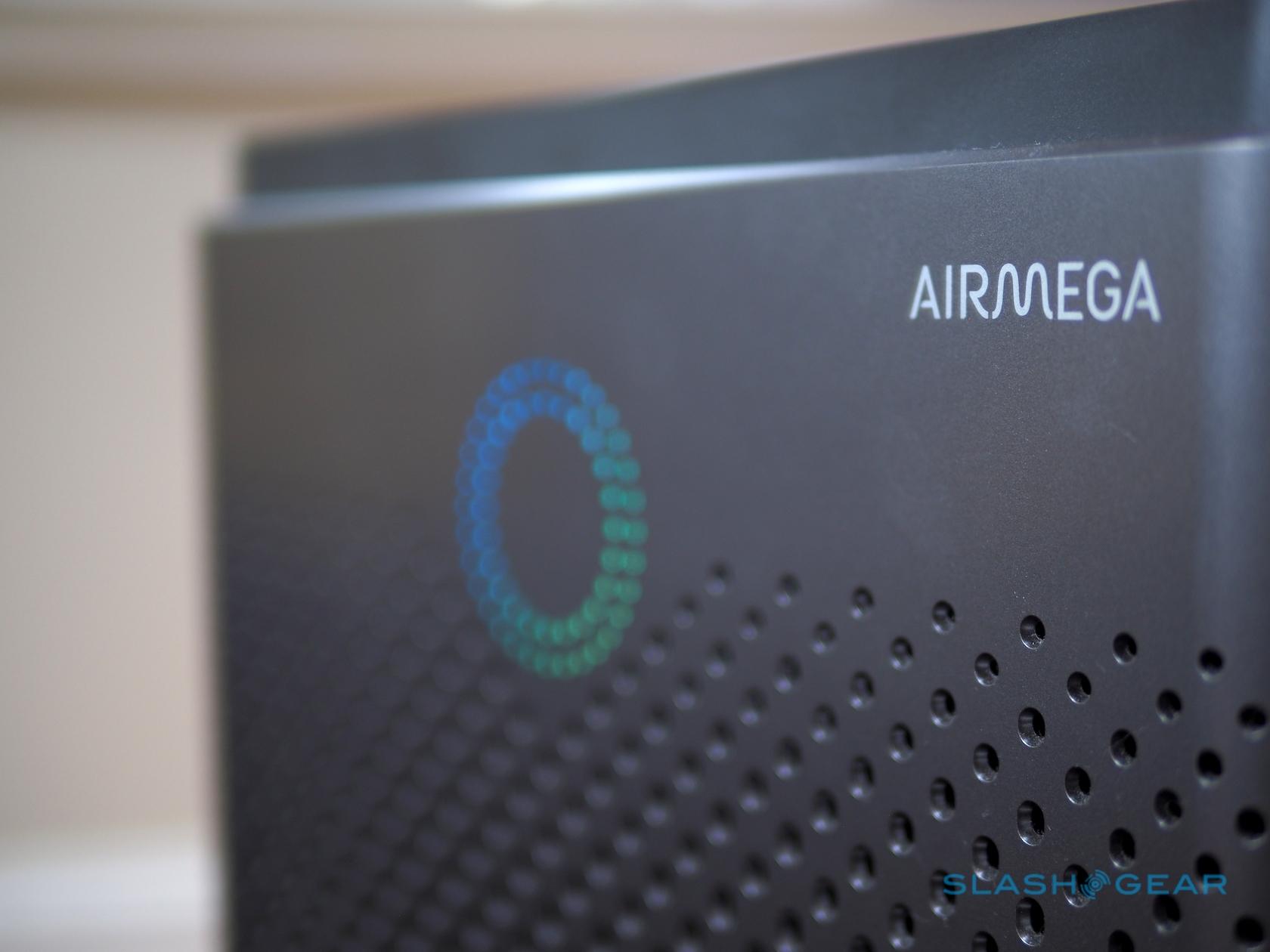 Even so, the Airmega 400S is a not-inexpensive way to address that. It’s definitely worth noting that the Airmega 400 – which lacks the app support but is otherwise functionally the same – is significantly cheaper. Think around $566 street price, versus the roughly $636 you’ll currently pay for the 400S. Either way there’s the annual cost of filters, of course.

The reality, though, is that clean air isn’t something you should only think about when there are forest fires raging. Asthma sufferers, and those with allergies will find plenty to like about the Airmega 400S; even just the amount of dust and pet hair around has gone down, I’ve noticed. Best of all, the purifier kicks in fast, deals with the problem swiftly, and then returns to its slow murmur: it’s far quieter than most fans and other purifiers I’ve used. 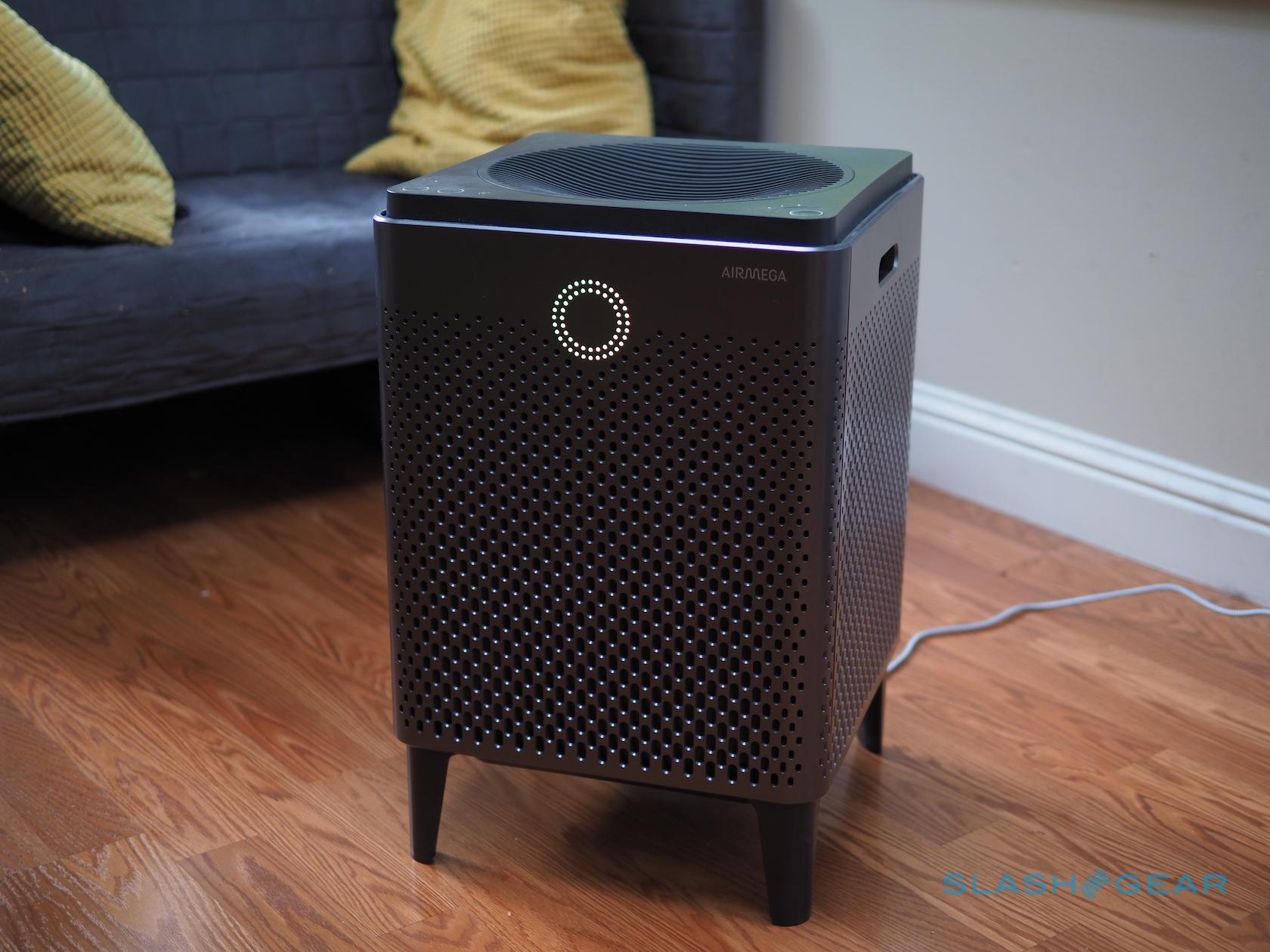 Is that enough to justify the sticker price? I’d say yes, if only for how much more comfortable the 400S has made the past weeks of dire air quality. If the price tag is too rich, meanwhile, it’s worth noting that Coway’s smaller models – like the AP-1512HH Mighty – use the same sort of filter technology but are much more affordable, though you would need several to match the Airmega 400S’ impressive coverage.

SlashGear uses affiliate links, and sometimes if you order something we’ll receive a commission on the sale