Information is pointless if you can’t find it when you need it. That’s the ethos that has driven search engines like Google just as it has “digital notebook” services like Evernote, and it’s also the reason why Google+ could eat Evernote’s lunch if it put its mind to it. With the news of Facebook’s one billion active users, questions as to how Google+ will compete with Zuckerberg’s empire have inevitably surfaced; of course, the best way to stay relevant is to offer something completely different altogether.

While both Facebook and Google+ are social networks, they take very different approaches. Facebook is about friendly sharing: inviting people into your digital life, and dipping into theirs. Google+, in contrast, sits at the hub of all of Google’s services, each of which is focused on a different type of data: email, documents, music and videos, photos, and more.

I’ve been an Evernote user for years now, and a Google+ user since the service opened its virtual doors in mid-2011. Like many, I’ve been relying on Evernote as a digital aide-memoir, a place to gather up thoughts, lists, books I might want to buy, music I might want to listen to. I’ve drafted articles and reviews in Evernote on my phone while sitting on buses and trains, then picked up where I left off in the desktop version. I’ve even relied on its clever OCR – which can pick out text in photos and make it searchable – to store business cards, snapping them with my phone’s camera for easier recollection than digging through a physical stack later.

It’s proved its worth both because it’s convenient and because I’m lazy: I don’t want to have to remember which device my information is stored on, I don’t want to have to remember to synchronize when I get back home, I just want to be able to find data quickly later. In recent weeks, though, I’ve found myself bypassing Evernote and using Google+ for many of those tasks instead. 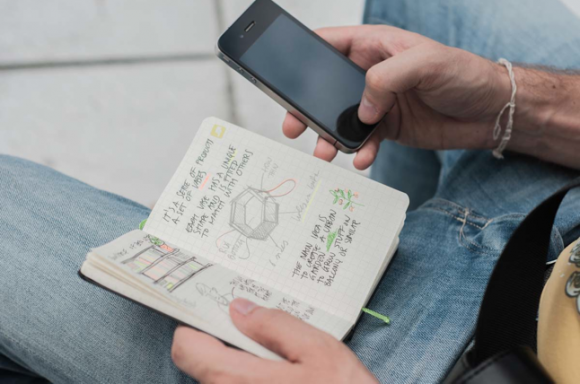 For those who haven’t used it (or who have turned the feature off), the Google+ app for Android and iOS automatically uploads photos and video you capture with your phone and tablet to a private album. From there you can share it easily, either publicly or to specific circles you’ve set up; or, as I’ve been doing, you can keep it private but use it as a simple way to keep track of information.

In bookstores, I’ll snap a shot of the cover of a book that I might want to check online reviews of later, or I might grab a photo of a particular wine bottle, or a DVD, or an advert; anything I might think I’ll be interested in at some point in the future, but know will slip from my memory before I’m home again. I know Google+ will automatically upload it and it’ll be waiting for me, not only in the browser on my computer, but pushed into the Google+ album in the gallery on all my Android devices.

I could snap a photo with Evernote, but I’d feel obliged to tag it, or sort it into a notebook, and that’s more than I want to do when I’m out and about. Still, Evernote’s organizational systems are far more advanced than those of Google+, since it’s set up to handle sorting and recalling huge amounts of information.

That needn’t always be the case, however. Google has all of the constituent parts to make an impressive alternative to Evernote, building on different aspects of services already on offer. Text and handwriting recognition are already used by search, able to find results in PDFs and translate the scrawl of a finger on your smartphone display: they could just as easily pick out text in snapshots of book jackets and billboards. Evernote’s notebooks could find their equivalent in private Google+ circles: individual ways to gather together content that could – but not necessarily – be kept private rather than shared.

Where Google+ has the potential advantage over Evernote is how integrated it is into our daily lives and the services we rely on, not to mention the social aspect. My photos of business cards currently wait in an Evernote notebook for me to search and find them; Google, meanwhile, could pull out the text and automatically slot it into my Gmail contacts, then sync that with my phone. It could also fill in the gaps based on what it knows about the person: things that won’t fit on a 3.5 x 2 inch card, like a Google+ bio, or a list of sites that person contributes to and samples of the recent content they’ve produced.

Those books I’m curious about, or adverts I’ve spotted, could be recognized with the same technology that powers Google Goggles: then I can automatically see reviews, and the cheapest place to buy them. Maybe there’s a QR code on the advert, something I probably won’t scan at the time – it always seems to be the way that the billboards with QR codes I see are when I’m underground on the Tube, with no signal to look them up – but which Google+ can quietly look up for me itself, and use that information to flesh out what I see when I come back to review my gallery of gathered images. After all, it already knows that I must be interested in that topic, since I’ve been curious enough to take a photo of it.

[aquote]I needn’t solely rely on Google’s opinions, I can crowdsource[/aquote]

Of course, Google+ is a social place, and so I needn’t solely rely on Google’s opinions before I make a decision: I can crowdsource it. I’m probably not the first person to ask, either, so if the ensuing discussion is done publicly, Google+ could easily bring together those multiple conversations so that everybody gets the benefit. Google knows masses about me and the sort of people whose opinions I particularly trust – it reads my email, after all, and it sees who I interact with most and what I click on regularly – so it could make sure the most useful tidbits simmer up to the top where I’ll see them first.

I, like a lot of people, am lazy with how I collect my data – heck, sometimes I just email myself something I need to remember, and hope it’ll be somewhere near the top of my inbox when I next open it up – but I expect great things in how I then consume it. Evernote is a brilliant digital alternative to the notebook, but my life has moved on from collating snippets of information through which I’ll browse later on.

If Facebook is about sharing the minutiae of our lives and hoping our friends comment on it, then Google+ has an opportunity to do something new, to bridge our interests and our expansive digital memories and help us process them in meaningful ways. Evernote may get caught in the crossfire, but I doubt I’m the only one who’ll follow the path to the service that helps me get most done with the least effort.