Chromecast turnkey app for all videos in development by Koush

Developer Koushik Dutta is creating at least one app for Android devices aimed at allowing any and all video to be “cast” from a mobile device’s gallery to Chromecast. The Chromecast device is currently sold out in many areas of the internet and in stores across the country due to its relatively low cost and super-basic functionality with essentially every modern television (with an HDMI port, that is). Koush is aiming to expand this device’s abilities from YouTube and Netflix out to a whole lot wider set of media bits and pieces in the very near future.

There are two apps in development at the moment coming up quick from Koush. One of them works with RSS feeds and goes by the name Feedcast. That app will allow users to see any RSS feed of video links in a very, very basic list that can be clicked. With a click, the link will be fed to Chromecast which will then play the video on its own, the same as if it were an official Google-approved video app like Hulu.

Below you’ll see a basic demo of Feedcast, complete with Twit.TV being used as the tester page. This system – as Koush states – was knocked together in 30 minutes using extremely basic Chromecast code. This should serve as a testament not only to Koush’s current abilities in coding, but in the relatively easy process Google has provided in working with Chromecast abilities.

Development of this app includes icons and descriptions as well as a timeline for video scrubbing back and forth.

Koush also revealed a few screens this week of an expanded bit of functionality in what he’s calling MyCast. This system is what Koush calls “a turnkey solution for casting video off your phone and computer. I.E. play videos off your phone.” He goes on to note that you’ll also be able to “install a Chrome extension that lets you play videos from your computer, or use your phone as a remote to play content on your computer.﻿”

Another very early version of this app – MyCast, that is – can be seen here. This is MyCast – as it, again, is just being code-named for now – working with Dropbox.

Below you’ll see additional screenshots provided by Koush of this app in development. There’s no current release date, no pricing information, nothing of the sort as Koush is developing this suite himself. Stay tuned for the whole end-product delivery! 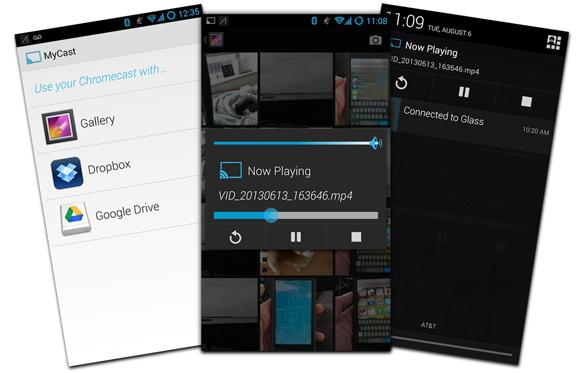