Chevrolet took the 2017 Camaro ZL1 to the track, and it’s FAST

Chevrolet may have been making plenty of noise about its eco-friendly Bolt EV lately, but the 2017 Camaro ZL1 proves it hasn’t forgotten about enthusiasts either. Billed as the “fastest ever Camaro”, the ZL1 certainly promised a lot on paper, what with its 650 horsepower, supercharged LT4 engine. What we weren’t entirely sure about was just how that would translate to the road.

Now, courtesy of the High Speed Oval at Germany’s Automotive Testing Papenburg GmBH proving ground, we have a much better idea. Chevrolet took the new coupe there to put it through its paces for some speed trials, and the results are fairly epic – especially if you consider the Camaro ZL1’s price. In fact, it topped out at 198 mph.

That’s based on the average performance running the car in both directions around the loop, which is 7.6 miles long. That way, Chevrolet can be sure to have compensated for wind speed on the day. The ZL1 hit 202.3 mph in one direction, and then 193.3 mph in the opposite direction. 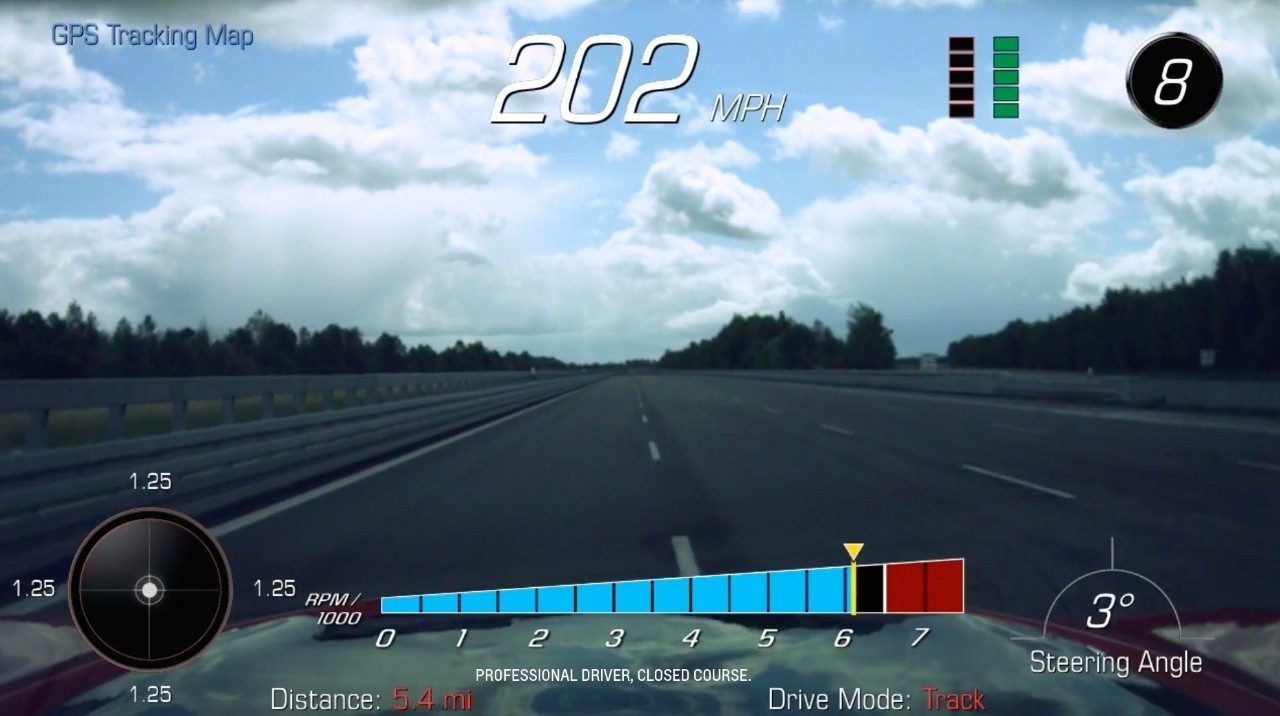 The car itself was using the 10-speed automatic, which Chevrolet offers as an option. Standard is a six-speed manual transmission with Active Rev Match. However, the tires were the production Goodyear Eagle F1 Supercar 3 rubber, set to the recommended 44 psi for extended high-speed driving. Indeed, Chevy says, the only changes made from a stock Camaro ZL1 were the safety equipment mandated by the track, and data logging kit to make sure the numbers add up.

Most owners won’t have access to the latter, though Chevrolet will offer the car with the Performance Data Recorder (PDR). First introduced back in 2014 as an option on the 2015 Corvette Stingray, the package consists of a data logger that writes GPS, speed, transmission, engine speed, and other information to an SD card in the glove compartment. Meanwhile, a front-facing camera synchronizes that data to a video of your driving.

While the ZL1’s stock performance was impressive enough, with a few tweaks the Chevy engineers coaxed even more from the Camaro. “After testing the car in standard settings, which produced the 198-mph average,” Al Oppenheiser, Camaro chief engineer, explained, “we set the front and rear camber adjustments to 0 degrees and the tire pressures to the maximum allowable sidewall pressure, and saw the ZL1 average over 200 mph.”

Even if you never get close to those particular three figures yourself, there’s plenty at lower speeds to set the Camaro ZL1 apart. It’ll do the 0-60 mph sprint in 3.5 seconds, Chevrolet says, and a quarter mile in 11.4 seconds at 127 mph. 60-0 mph braking takes 107 feet.

NOW READ: Stock vs Mods: What Chevrolet Performance does to the Camaro

Standard are a stanchion rear spoiler, and an auxiliary transmission oil cooler cover which Chevrolet has submitted for a patent thanks to its cut in front-end lift without adding drag. On the options sheet will be Magnetic Ride Control, Brembo six-piston Monoblock front brakes, and 20-inch forged aluminum wheels, along with Goodyear Eagle F1 Supercar 3 summer-only tires measuring 285/30ZR20 in front and 305/30ZR20 in the rear. The coupe will be offered with an electronic limited-slip differential.