Change down into third, watch your apex, and then roll back onto the throttle as you power down the straight; it’s the perfect lap, and the 2015 Corvette Stingray aims to record it. Chevrolet has announced one of the more unusual options for its new sports car, the Performance Data Recorder or PDR that combines a road-perspective video camera, in-cabin audio, and telemetry data direct from the Stingray’s digital brain to record your driving to an SD card slotted into the glove compartment. The roar of the Stingray Convertible still ringing in our ears, SlashGear showed hardly any reluctance whatsoever about sliding behind the Stingray’s wheel and testing it out at CES 2014.

Methods to log track performance and record driving footage aren’t new: GoPro and others have cornered the market in compact, flexible, and rugged little cameras that can be suction-cupped to windshields and body panels. Chevrolet’s system on the 2015 Corvette Stingray, however, is the first fully integrated system combining telemetry logging and video recording in a production car.

The system comprises three main parts, each baked into the car. First up is the video system, which comprises a 720p HD camera built into the upper windshield, just behind the rear-view mirror. That forward-facing view is combined with audio recorded from a microphone mounted in the cabin, in case you want to talk your way through the lap (or simply capture your passenger yelping). 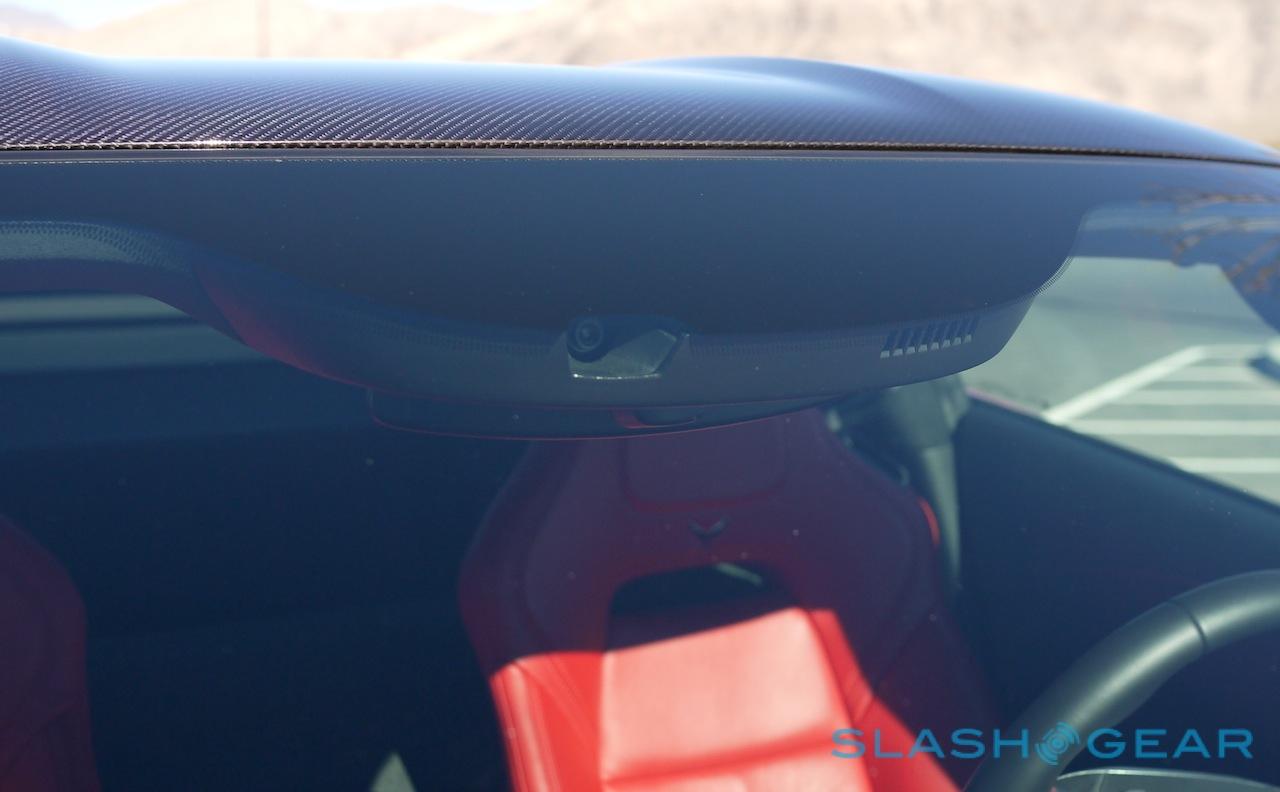 Along with that video data is telemetry from the Stingray’s CAN (Controller Area Network), ranging from the basics like speed, current gear, and engine speed, through to more complex information like the angle of the steering wheel, braking force, and how many G’s you’re pulling through the corners. It’s paired with a dedicated, high-resolution GPS chip, which tracks location five times more frequently than the typical navigation system for greater accuracy.

Both of those feed to an SD card slot in the glove compartment, which can store around 200 minutes of driving on an 8GB card, or around 800 minutes on a 32GB card. Although you could piece together a similar setup using aftermarket parts, like a GoPro and a high-res GPS unit, what Chevrolet’s system offers is the ability to combine the two data streams, overlaying telemetry onto the video footage. 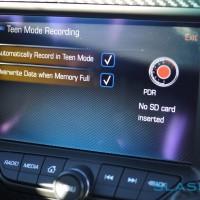 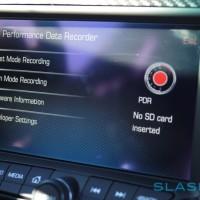 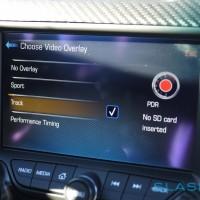 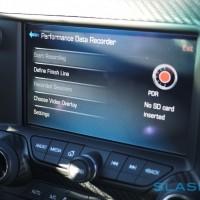 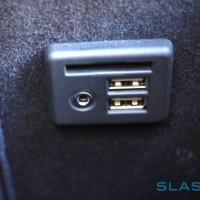 Four different views can be selected for the recording, ranging from Touring Mode which keeps only the video – Chevrolet suggests it’s best for scenic drives you want a record of – through Sport Mode, which shows the basics of speed and G-force, to Performance Mode, with acceleration, 1/4-mile speed, 0-100-0 mph runs, and elapsed time. Finally, there’s Track Mode, which shows everything including engine RPM, location, lap time, and all the other details the PDR has collected.

Chevrolet expects the PDR system to be most appealing to weekend racers and the like, and so most of the features are designed to make it easier for them to integrate into their track time. For instance, once the start point of the lap is defined using the Stingray’s 8-inch touchscreen, the PDR will automatically classify each circuit rather than demand it be manually logged. 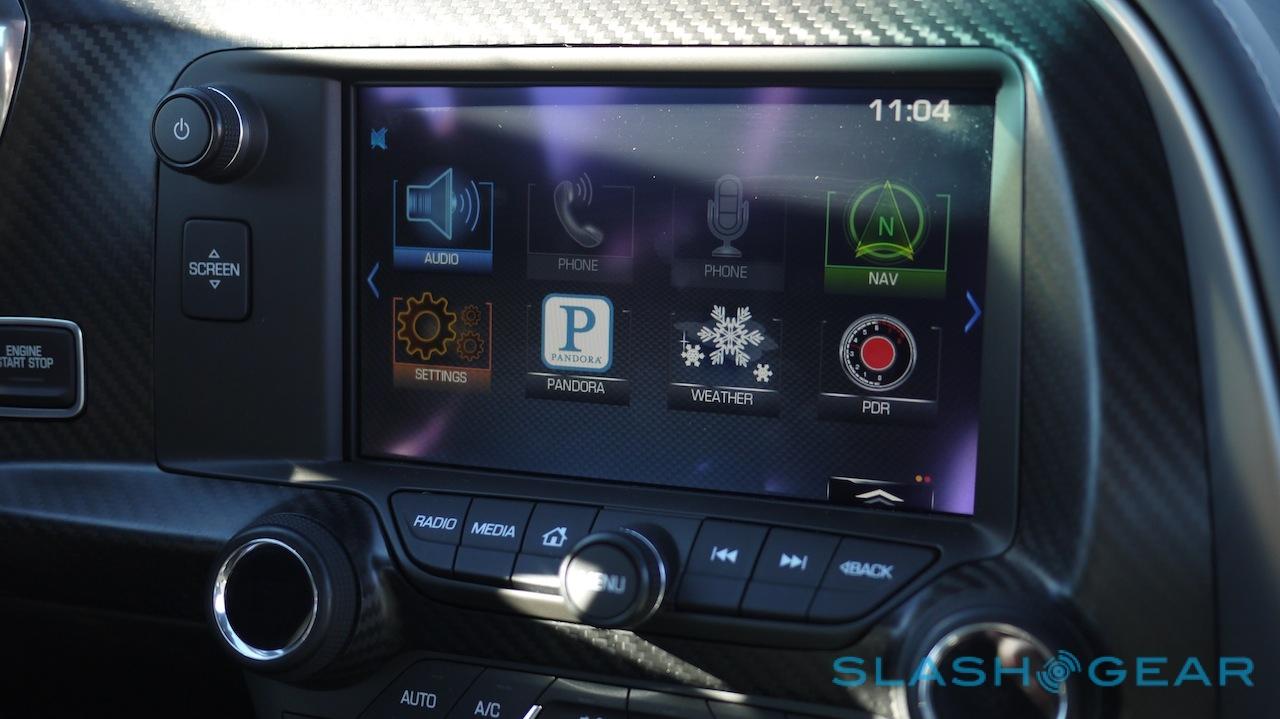 However, the benefits of having a “Big Brother” in your 460HP+ coupe aren’t limited to track day. The system has two other modes – “Valet” and “Teen” – which aim to keep an eye on how the car is driven when it’s out of your hands. Each can be set to record automatically.

In practice, it’s an easy system to use. The PDR option shows up as another button on the Stingray’s touchscreen, and once you’ve tapped it you get the choice of starting/stopping recording, deleting the current lap start-point, and jumping into the other modes. You can also review recorded sessions directly from the infotainment unit, for immediate gratification, or pull out the card and share the MP4 footage via YouTube or similar. 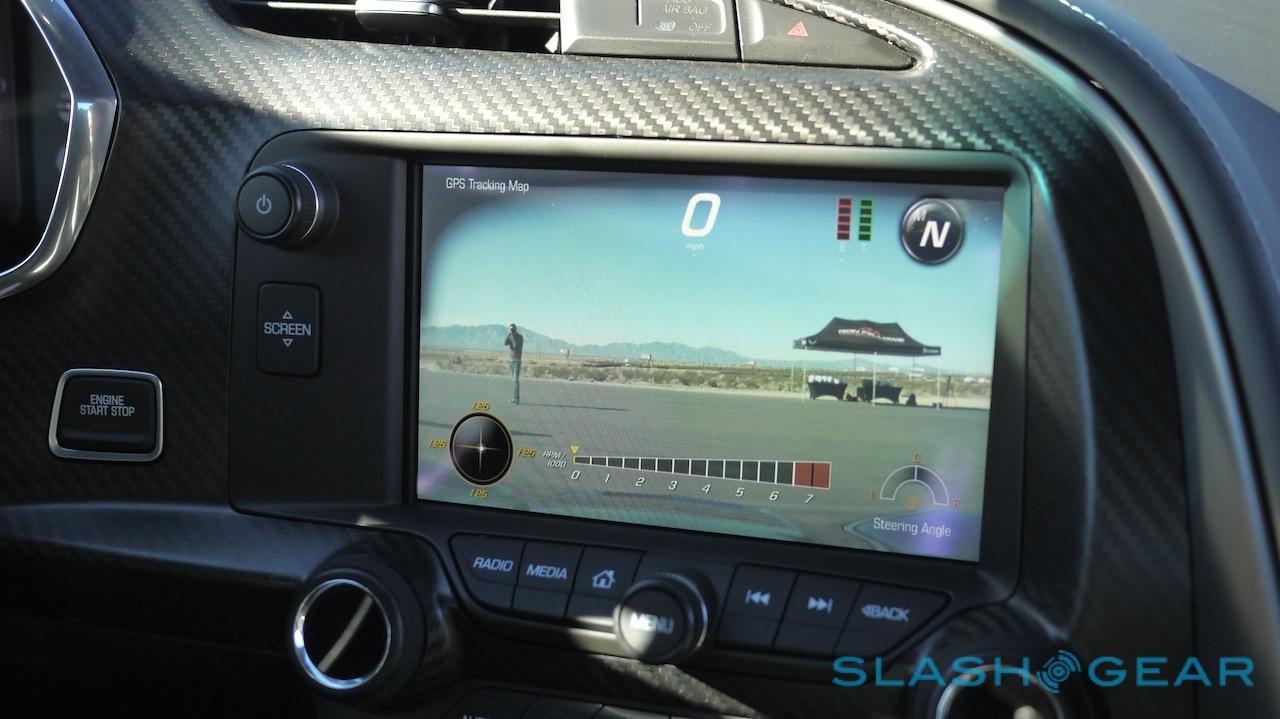 However, Chevrolet will also be including the “Cosworth Toolbox” package with the PDR option, developed by the motorsports engineering company to allow deeper analysis of lap performance. That also means comparing different laps to see how consistent they were, to spot trends in cornering, speed, and braking, and even to overlay the route on a satellite map of the track pulled from Microsoft’s Bing. 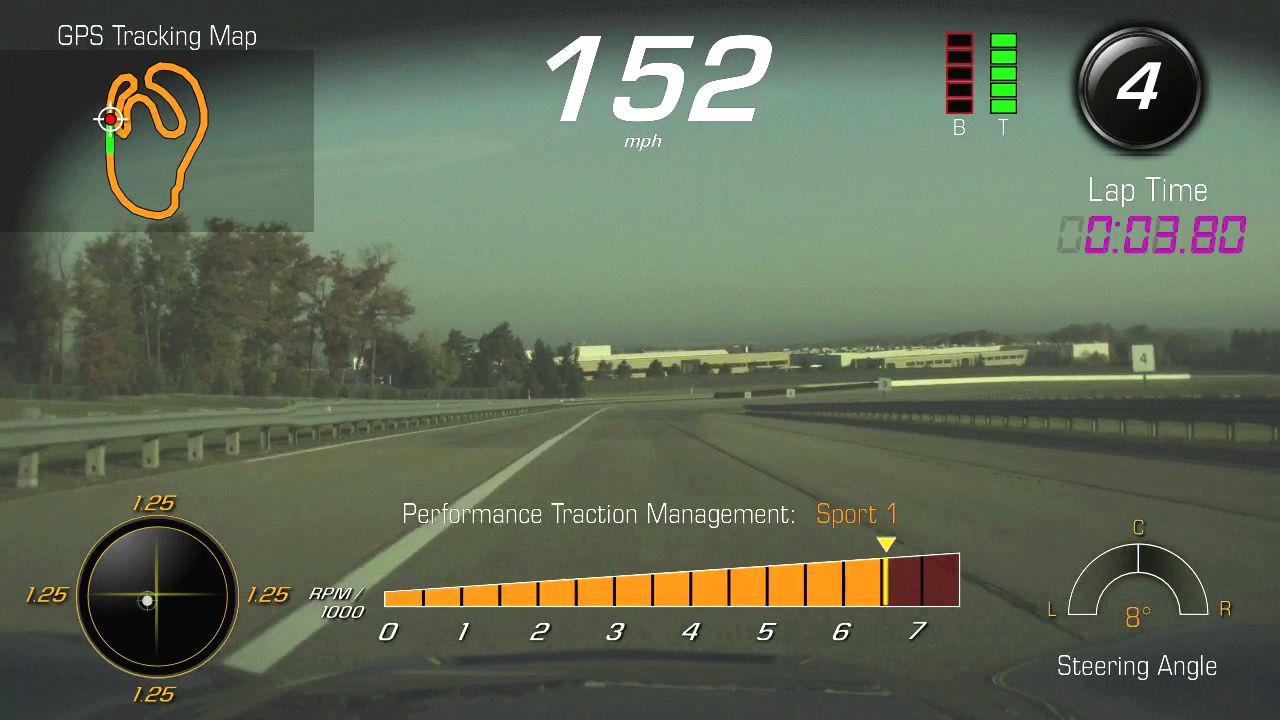 For anyone with more than a passing interest in how they’re driving, then, the PDR seems like a near-hassle-free way of logging how you’re driving – both on an impromptu basis, and as it evolves over time. It’s less fiddly than a GoPro, delivers more information than most standalone track-time loggers, and is as easy to use as slotting in an SD card and tapping the touchscreen a couple of times. 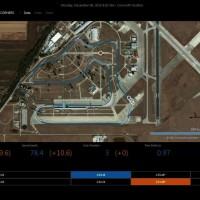 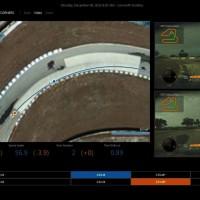 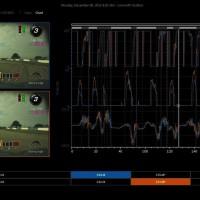 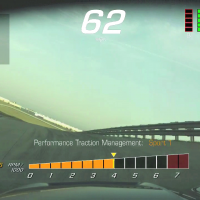 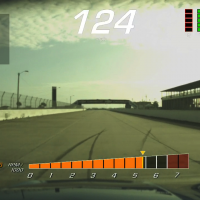 There’s room for improvement, of course. We’d liked to have seen 1080p Full HD resolution rather than 720p, and maybe the option of an interior camera to show the driver as well. Another possibility could be a second, wireless camera that could be mounted for cabin footage, or pointing outside at a different angle, like a tethered GoPro for secondary shots.

Still, for a first-gen product it’s impressive stuff. Chevrolet hasn’t said how much the PDR option will cost, with pricing promised for closer to when it’s offered on the 2015 Corvette from Q3 2014. 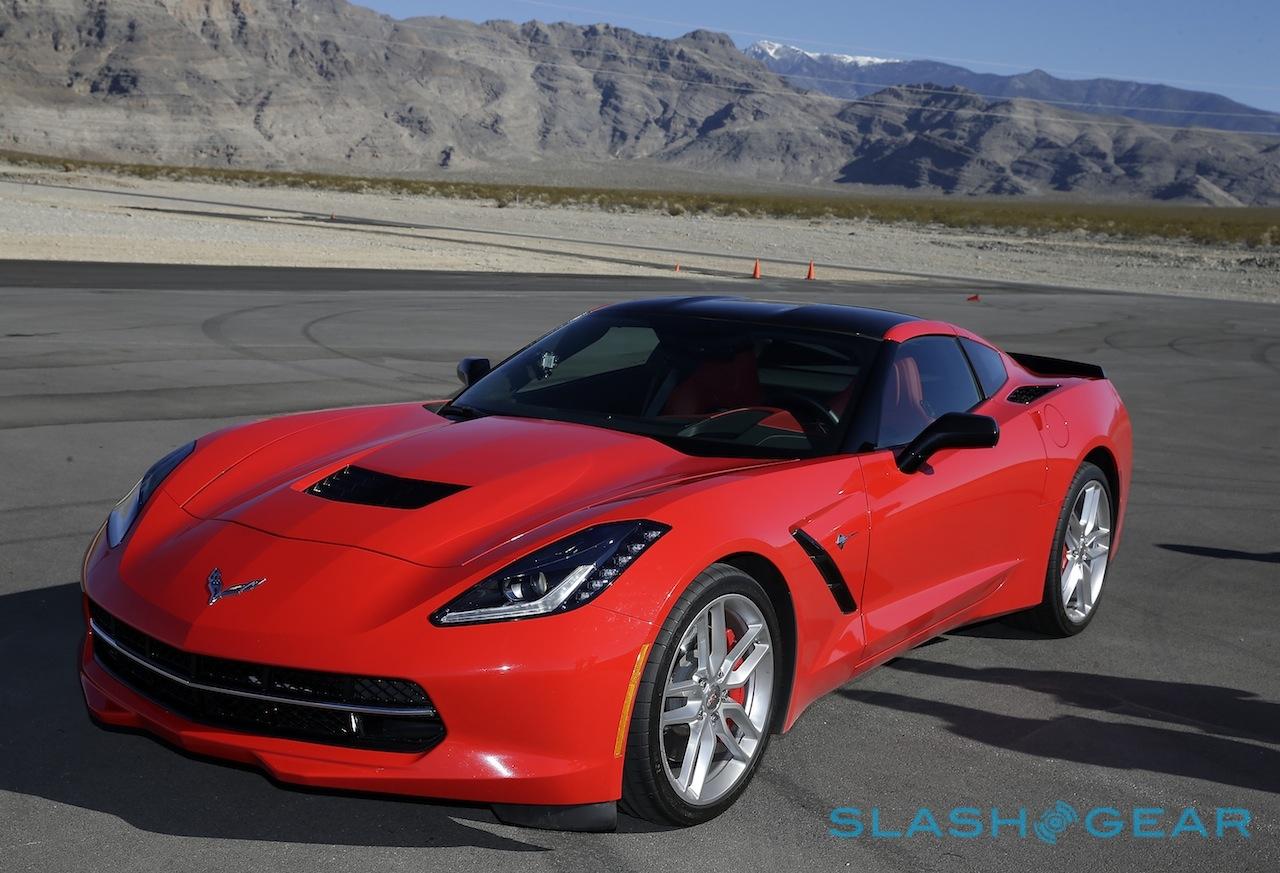