The server racks and computer shelves of CERN might not be the first place you’d expect to find LEGO lurking, but the CERN Computing Centre team was ready with some Easter Eggs when the Google Street View cameras came calling. Google took its photo-documenting systems round the European Organization for Nuclear Research earlier this year, allowing Google Maps users to navigate the corridors virtually. However, in among the Higgs Bosons there are some hidden gems a little easier to find: aliens, gorillas, and more, all made of LEGO.

According to the CERN team, the minifigs – which also include Hawaiian dances – were spread around the Computing Centre especially for the Google cameras to inadvertently capture. Over twenty were hidden, across both floors of the computing department.

CERN says the photos will be used for a “virtual scavenger hunt”, inviting employees and members of the public to use Street View to find all of the toys. The most likely places are on top of racks and servers, the team says, as per the banana-clutching gorilla below. 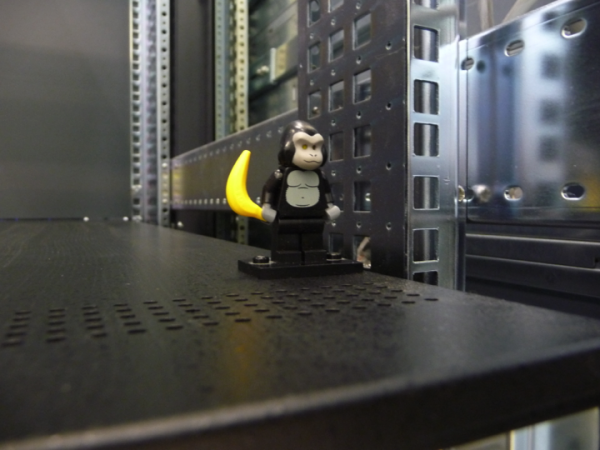 Originally intended to give street-level visuals as Google Maps users navigate, Street View has been increasingly offering an insight into places most of the public wouldn’t be able to visit themselves. This year alone, the camera team has documented the Galapagos Islands, the island which inspired Skyfall, post-quake Fukashima City, and more.

The expansion has seen Google develop a number of different cameras, each suited to differing environments and territories.

However, Google has also opened Street View up to the public. The company is offering to loan its Trekker camera backpack out to those with access to particularly interesting settings; however, as of earlier this month it’s also possible to create Street View imagery simply by using your existing DSLR.