Star Trek: The Next Generation promised me hidden displays in every wall, and now Capstone Connected claims to have delivered with its Thin Cast Smart Mirror. At first glance a regular mirror, it’s only when the hidden touchscreen wakes up behind the glass that you realize the tech functionality baked inside.

Capstone has two sizes of mirror, the Standard ($799) – which I have here – intended to be wall-mounted, and a larger Fitness/Wardrobe ($999) version which can be wall-mounted or used free-standing. The former measures 32.5 x 22.5 inches and 19 pounds, the latter 60 x 22.5 inches and 37 pounds; both are 1.25 inches thick. Mounting hardware is included in either case, and you’ll want to make sure you find a sufficiently sturdy stud in the wall since I doubt drywall alone would be up to it. 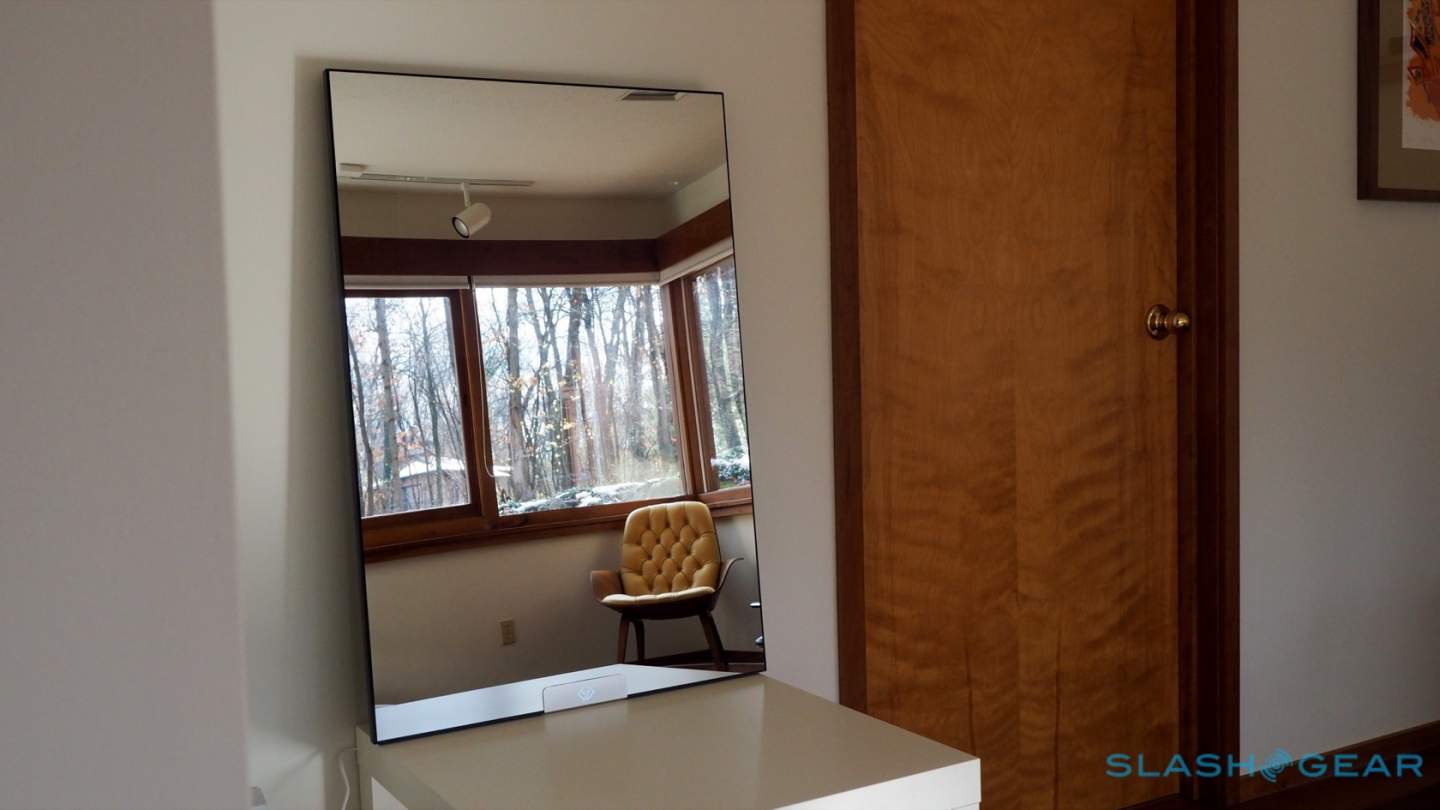 Regardless of overall mirror size, the 18.5-inch display is the same. In effect it’s an Android tablet integrated into the larger glass, sealed so as to be IP64 water resistant: it can handle some steam or water splashing in a bathroom, for example.

Don’t expect iPad Pro levels of performance, here. Capstone is using Qualcomm’s Snapdragon 665, running Android 10 with 4GB of memory; half of the 32GB of storage was used up out of the box, and there’s no way to expand it. The screen itself is a 1920 x 1080 Full HD panel, and you’ll be unsurprised to hear that – with a sheet of mirrored glass on top of it – picture quality isn’t great. 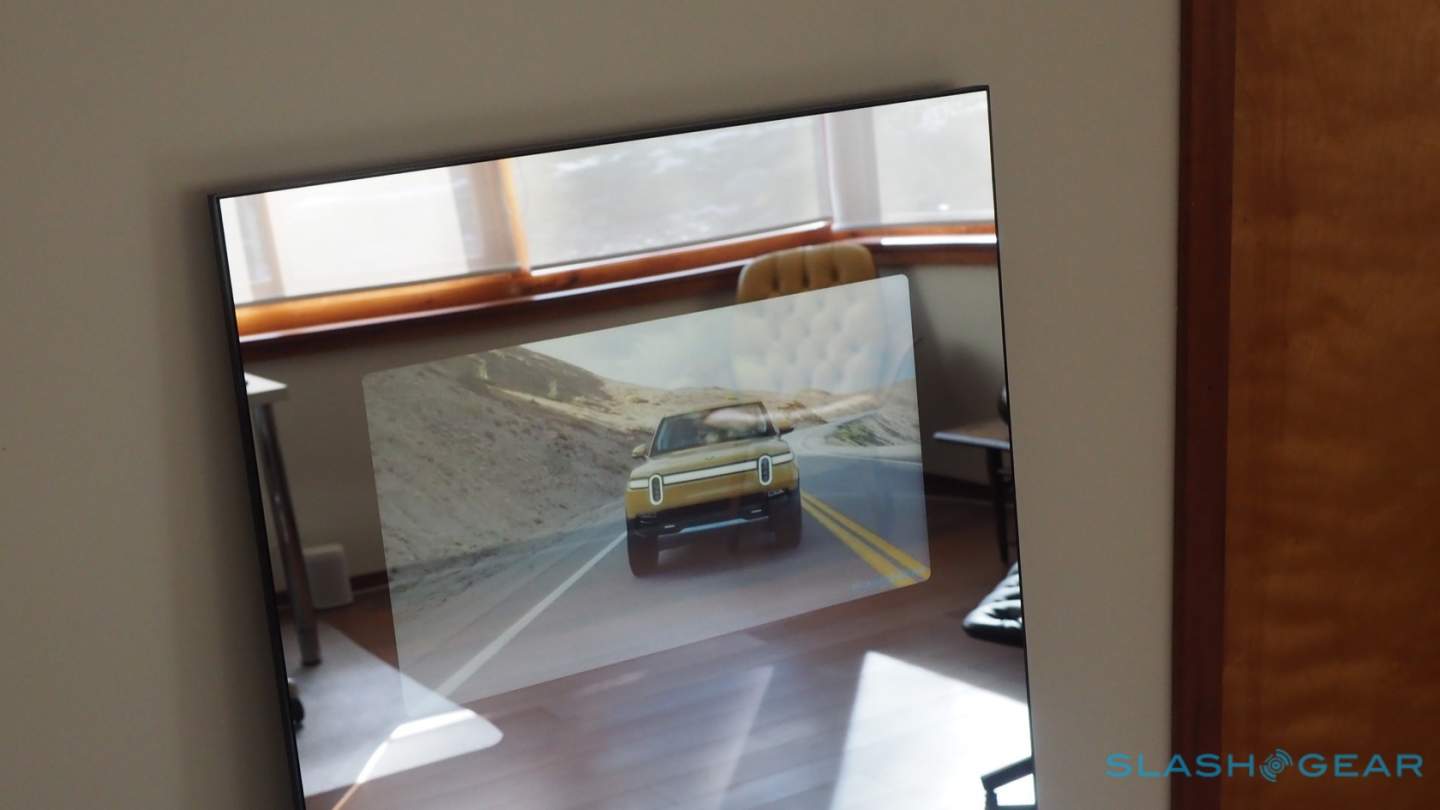 Colors and brightness are very subdued, while blacks are at best dark grays. This absolutely wouldn’t be my first choice to watch a movie; then again nor is it intended to be. More frustrating is how the panel struggles to keep up with brighter rooms, where reflections and glare battle against the underwhelming viewing angles.

Connectivity includes WiFi and Bluetooth 5.0, along with a USB Type-C port. Capstone includes an AC power supply or you can, optionally, use a portable USB battery pack if you don’t want to deal with mains power cables. Stereo speakers are built in – more powerful than the average tablet speakers, though not likely to beat a dedicated audio system in quality – with volume and power buttons on the bottom edge of the Standard mirror. With Bluetooth you can link headphones or external speakers. 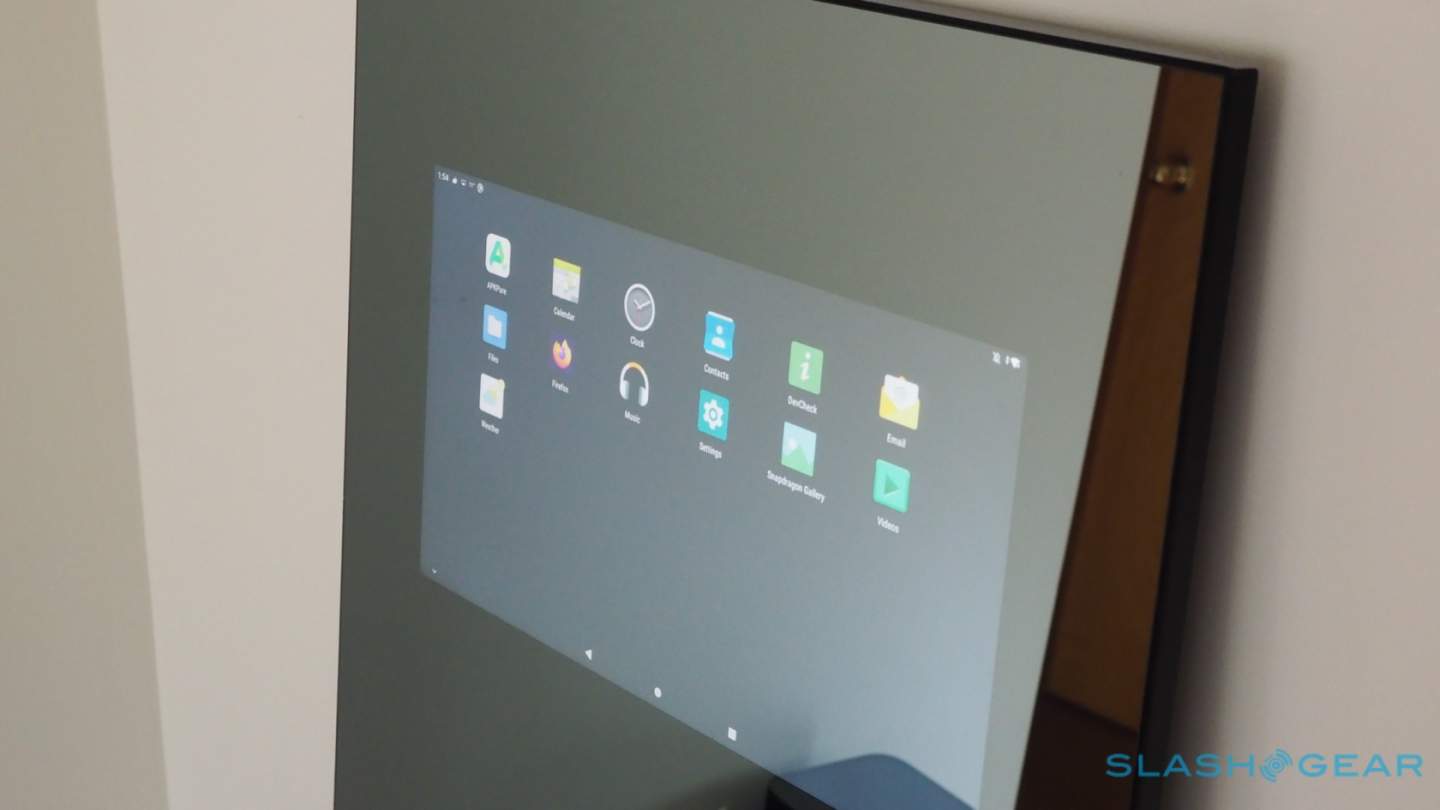 The power button not only switches the embedded display on and off, but toggles between the Smart Mirror’s two modes. The first is for standalone use, effectively giving you a regular Android tablet albeit one without Google Play support. Apps like Firefox are preinstalled, and there’s the APKPure third-party store for downloading and installing other software. Or, if you have the necessary APK, you could theoretically sideload it.

You’ll probably want to do that, too, unless you only need the very basics. The standard Android calendar, clock, contacts, email, files, music, video, and weather apps are preloaded, as is the Snapdragon Gallery app for images. Officially, Google apps like YouTube, Gmail, Google Maps, and others are limited to those Android devices which satisfy Google Play Services, though you may well find unofficial versions to download. Still, it’s definitely not as straightforward as the experience of most Android phones and tablets. 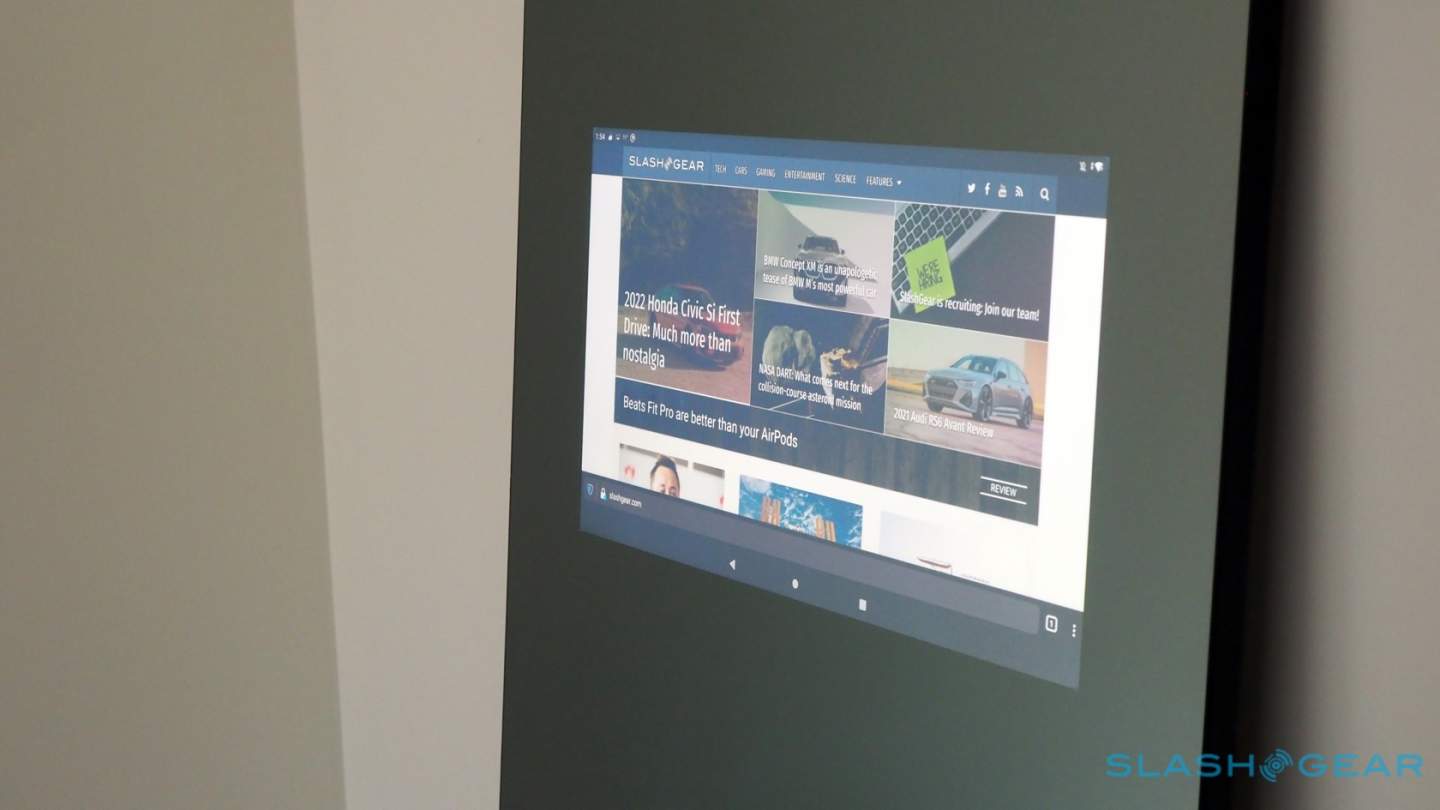 The second mode relies on smartphone projection instead. The Smart Mirror shows up as an AirPlay destination on iOS devices, or a Cast option on Android. Anything on your phone’s screen is then mirrored, while audio is piped through the Smart Mirror’s speakers. You can use Siri or the Google Assistant, though your phone will need to be within microphone range as all processing is done on that.

It’s surprisingly easy to use, with no apps to install on your device before you can link with the Smart Mirror. Capstone’s suggestion is that you could use it to watch YouTube videos of makeup tutorials or streaming exercise classes; alternatively, you could just sate your TikTok appetites while brushing your teeth. Being able to call up a yoga class in the Peloton app, and watch it while simultaneously monitoring my (less-than-amateur) form was useful, too, even if I did have to dim the room in order to escape glare when trying to view the display from the floor. 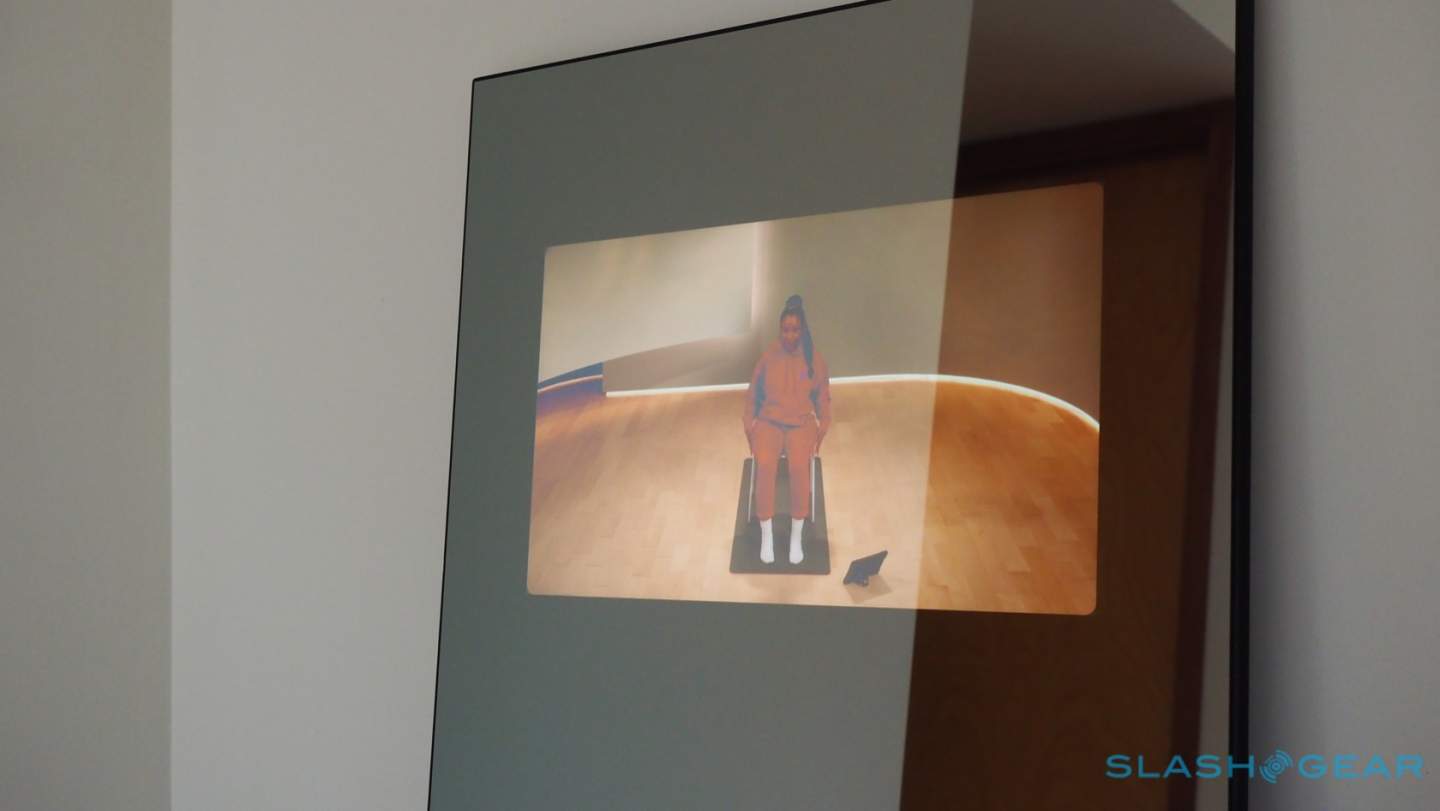 With the screen switched off, you could very almost think it was just a regular mirror. The giveaway is the Capstone logo at the bottom, which glows when the Smart Mirror has power. It’s not a button, though, and frankly I’d prefer it had the company skipped it altogether for a sleeker look. 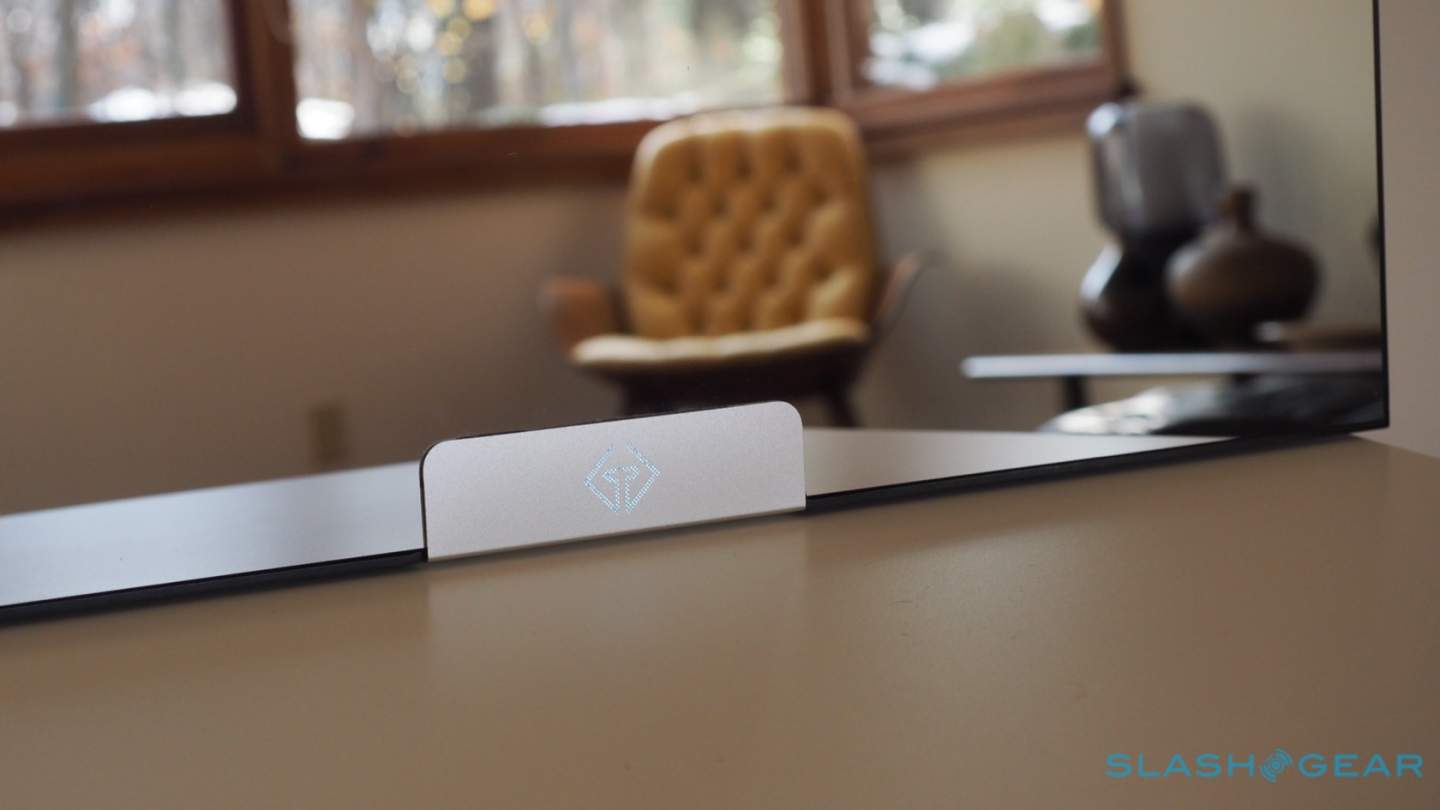 Something that was left out is a camera. That’s probably wise, given the possibility that the mirror could be mounted in a bathroom or bedroom where privacy concerns are more significant.

I’ve stayed in hotels where a TV is hiding behind the bathroom mirror, and there’s certainly something appealingly high-tech about the idea. Just how useful it is day to day, though, depends on quite how much you need to see yourself while you browse. Yes, Capstone’s Smart Mirror could be used as a family dashboard for calendar and such, but then so could something like Amazon’s upcoming Echo Show 15 at just $250. 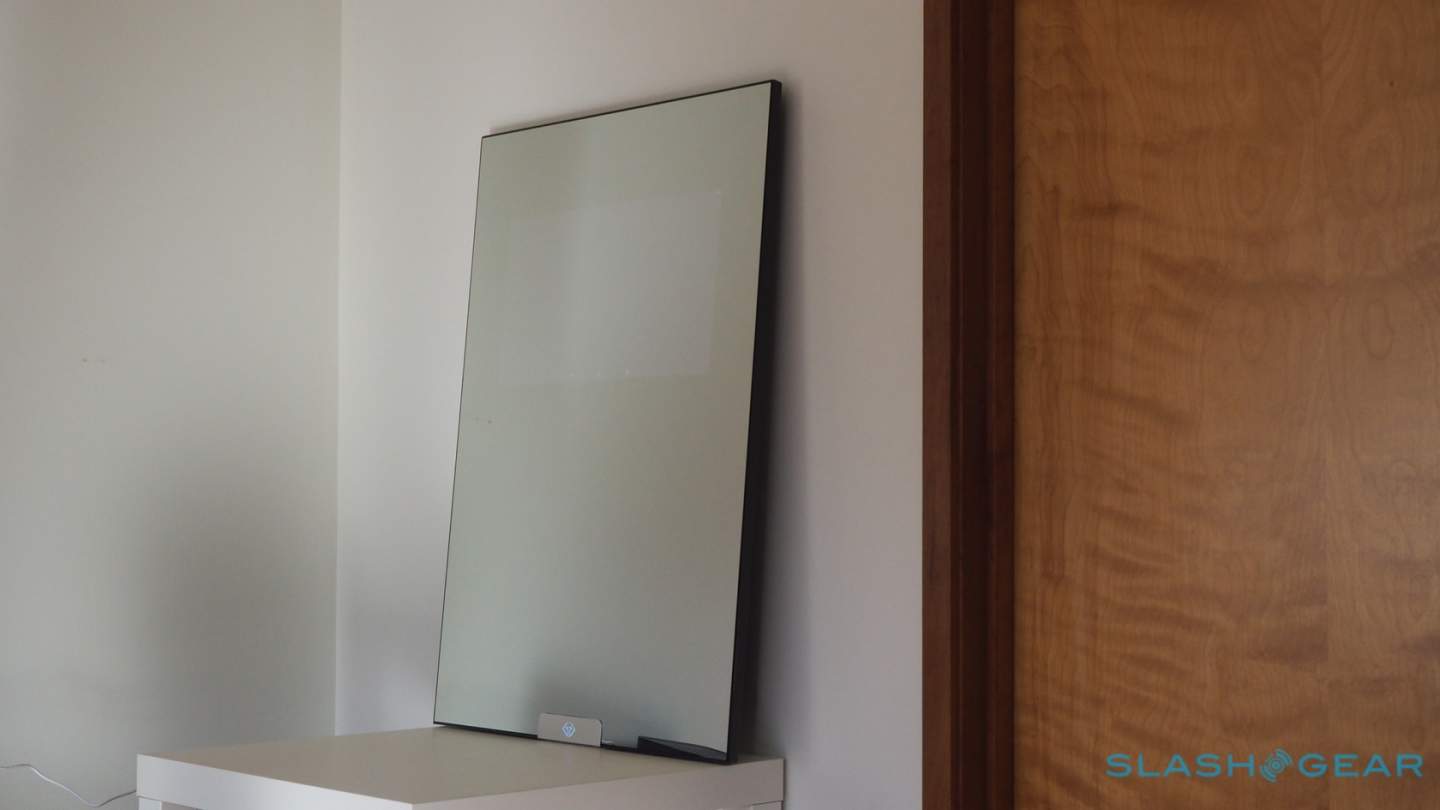 Lululemon’s MIRROR is another comparison, and at $995 a more apt one on pricing, though it pairs its fitness-focus with a far larger, 43-inch screen. Peering at the Capstone’s display from several feet away just isn’t quite the same. The upside, of course, is that you’re at liberty to project any content you want onto Capstone’s version.

That’s clever, though spending $799 or more seems like a luxury most people could go without. Lackluster picture quality is the more pressing issue, particularly in brighter spaces: often, as I sat on the floor trying to follow a particular stretch or yoga pose, I could see more of the reflected room than I could of the Smart Mirror’s screen. With the right positioning, and the right purpose, the way Capstone’s display appears is still fairly magical, but whether you can look yourself in the eye and justify the expense is the biggest question.