Can PRADA Save LG?

LG’s first PRADA Phone was legitimately groundbreaking, with its pre-iPhone capacitive touchscreen. The second PRADA handset was a stumbling attempt to cash in on a much-loved fashion label. Now, with the PRADA Phone by LG 3.0, the Korean firm is hoping to follow in the footsteps of Samsung and end 2011 on a high. The signs are surprisingly good: a great display only marred by mediocre resolution, a neatly designed body and no shortage of top-tier features like NFC, speedy HSPA+ and a potent dual-core. Can the third-gen PRADA Phone – and the lessons to be learned from it – lead LG to mobile salvation?

To say LG has had an underwhelming year in mobile is an understatement. The company has consistently fallen in the shadow of Samsung, with the devices it expected to revolutionize the market falling unimpressively flat. Delayed software updates and mixed-messages on which Android phones would eventually get what OS version didn’t do much to encourage early-adopters to stick with LG for their next device.

Look at the company’s Mobile World Congress push, back in February this year. LG concentrated on 3D, with both the LG Optimus 3D and the LG Optimus Tab packing a dual camera array good for capturing photos and video in the third-dimension.

Now, the media has a love/hate relationship with 3D. It’s hated because it’s so difficult to demonstrate and put into context, unless of course you’re showing people who already have 3D-capable equipment in which case you’re preaching to the converted. It’s loved because it’s an easy stick with which to beat a gadget: “see, how the foolish manufacturer has resorted to cheap gimmicks to try to make themselves relevant.” It’s perhaps telling that the two Android OEMs we see struggling to find their position in the smartphone segment at the end of the year, LG and HTC, are each the companies who made a significant attempt at mobile 3D.

Neither of LG’s headline devices held up to closer scrutiny; in fact, it’s only in the past month or so that a decent phone has hit the market. The LG Nitro HD finally delivered specifications people actually cared about: no camera tricks, just reliable photography skills, a 720p HD display, and a powerful dual-core processor. LG realized something Samsung had twigged to many months before: that there’s a place in the market for superlatives that become the standards by which others are judged. Spec-sheet bingo may not be the best way to decide on your new phone, but it’s certainly the way many buyers do today, and it’s how so many of them have ended up with a Galaxy S II in their pocket. 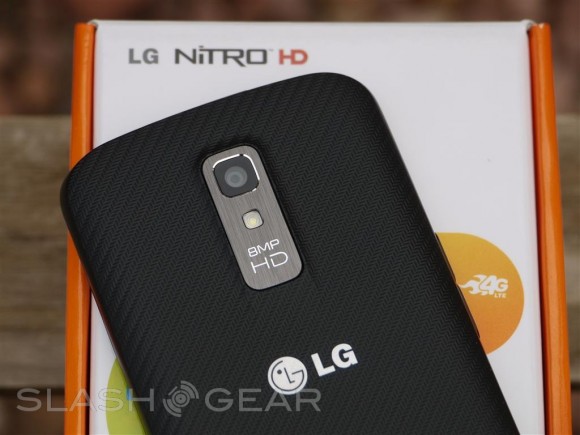 2012 will be about quality. This past year has seen manufacturers – even successful ones, like Samsung – throwing as many different models and variants at the market in the hope that something will stick. Yet at a time when purses and wallets are clenched tighter than ever, consumers aren’t saying “yes, I’d like the phone with a 0.1-inch bigger screen than that of my friends, for the sake of 0.1-inches, and a 0.2GHz faster processor” but are instead looking to the best phone for their money. Just because that might be a phone plenty of other people have, doesn’t mean it isn’t also the best phone for them too.

LG needs to capitalize on what’s appealing with the PRADA Phone and the Nitro, and that demands a long, hard look at where its fallen flat and where it has succeeded. The PRADA Phone delivers because it feels like – whether forced by the fashion label or otherwise – LG has finally given some serious consideration to style and consistency. Yes, there may be some duff points, like the faux-leather back panel that apparently couldn’t be real leather because it was deemed not durable enough, but it at least feels like LG’s designers and engineers had an idea, put together a plan and then stuck with it until the phone gained consistency as a result.

That same concentration needs to be applied to LG’s 2012 range. No more plasticky afterthoughts, no more needless break-out gimmicks. Phones that not only live up to expectations but exceed them. It doesn’t necessarily require a PRADA label to do that, but attacking the market with the same mentality of a detail-obsessed fashion house would be an excellent place to start.

More on the PRADA Phone by LG 3.0 in our full hands-on.