The Bugatti Vision Gran Turismo may be a stunning virtual racing concept designed for PlayStation’s Gran Turismo, but it makes its very real in-the-carbon-fiber-flesh debut this week at the IAA Frankfurt Motor Show. Our images show Bugatti’s stunner racing at Le Mans in Gran Turismo, but the ultra-exclusive French performance and luxury automaker tells us there’s a clear resemblance to Bugatti’s next hyper-car, the follow up to the Bugatti Veyron 16.4.

That car is expected offer even greater performance than the Veyron — already the world’s fastest, most powerful, and most expensive production car — and is expected to debut sometime next year. Until then, the Vision Gran Turismo is here to whet the appetite, and usher in Bugatti’s future. 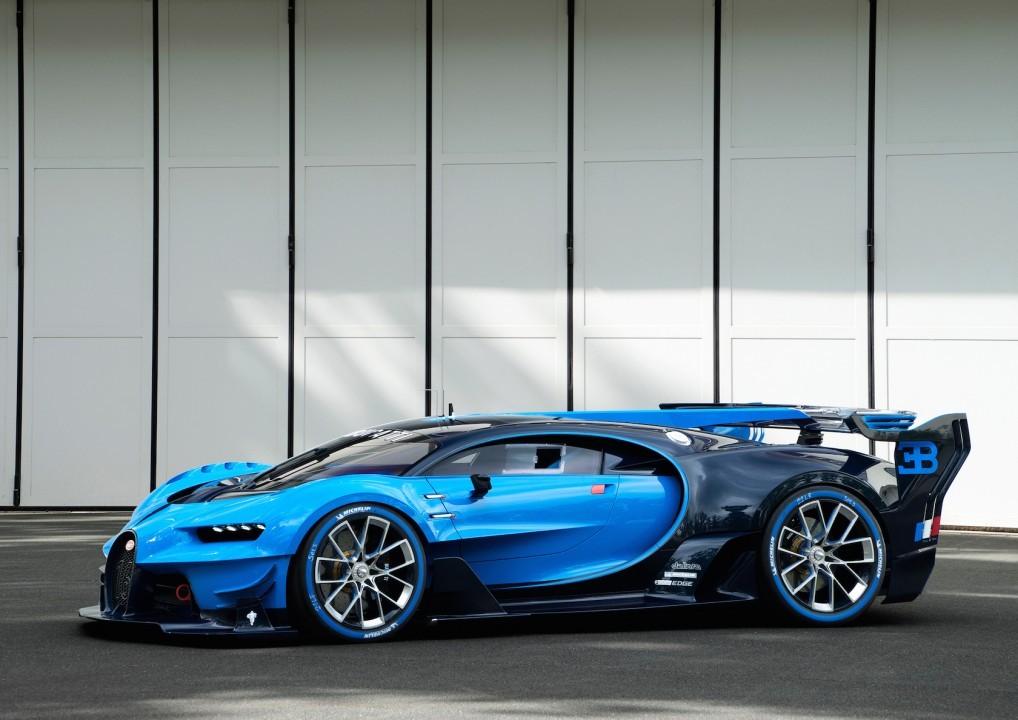 Bugatti President Wolfgang Dürheimer confirms “this project showcases Bugatti’s new design language, which we have developed to celebrate this new chapter in our company history.”

Inspiration is said to come from the famed Bugatti race cars of yore, including the 1937 Le Mans winner, Bugatti Type 57 Tank, but the design team channeled that into a modern vision. Visibly athletic proportions are performance-driven. The cockpit is low to the ground, the V-shaped hood, short rear-overhangs, and aggressive, muscular wings give an impression of forward thrust. 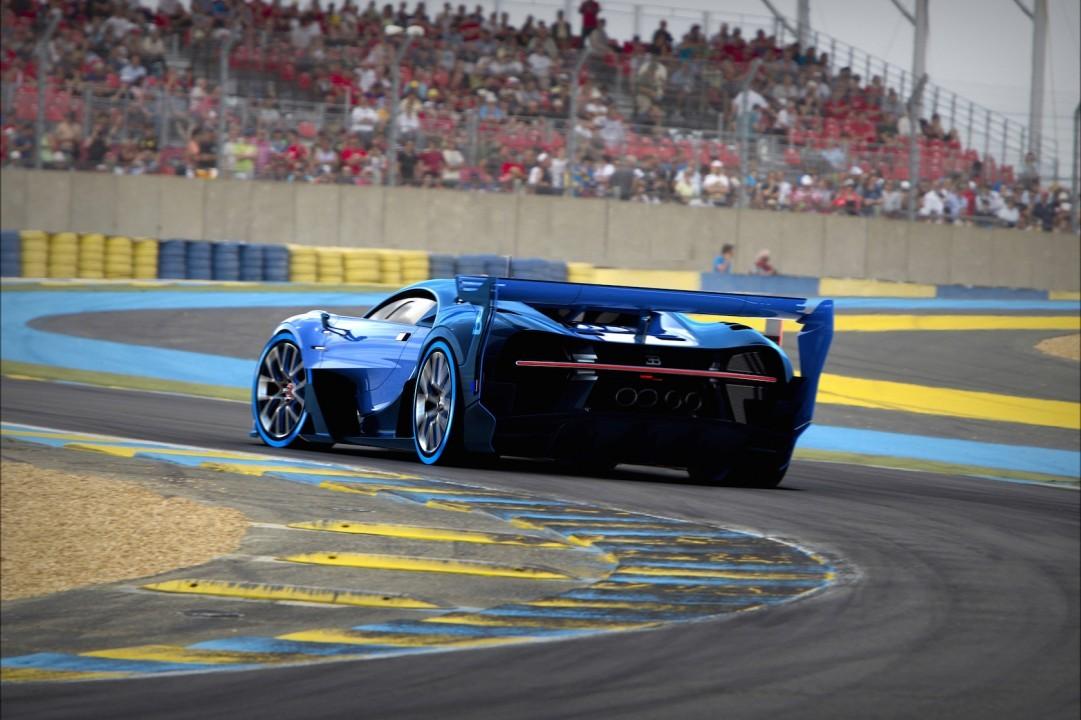 The iconic horseshoe grille makes its way onto Bugatti’s virtual racer, flanked by eight ‘eye’ headlights, four on each side, designed specifically for the Bugatti Vision Gran Turismo. Other cues, such as the traditional Bugatti line distinguish the car aesthetically, but also have a functional purpose — to provide additional cooling.

This purpose is shared by the NACA duct on the roof — attractively finished in a contrasting light blue — which Bugatti says is the most aerodynamic way to bring air into the engine at roof level, without creating turbulence in the air stream blowing into the rear wing. 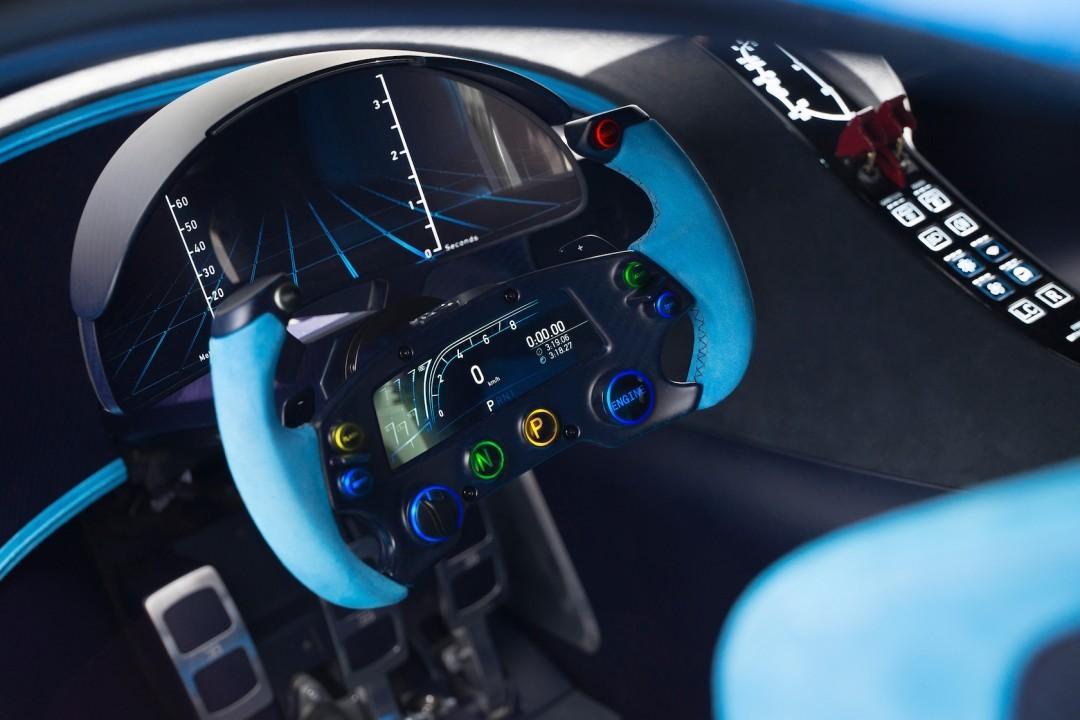 Inside the cockpit, racing functionality takes precedence. The controls are meant to be intuitive and in the optimal position for the driver. There are two driver displays to show vehicle controls, the second one is located on the steering wheel and combines images from three exterior cameras for a better overview.

Materials are in keeping with what one would expect from Bugatti; An especially lightweight and durable suede that is used for racing shoes in Formula One makes it way on to part such as the steering wheel, dash, and headrest. While a glossy carbon fiber is used on the exterior, a blue, matte-finish carbon fiber is used in the cockpit to minimize glare. 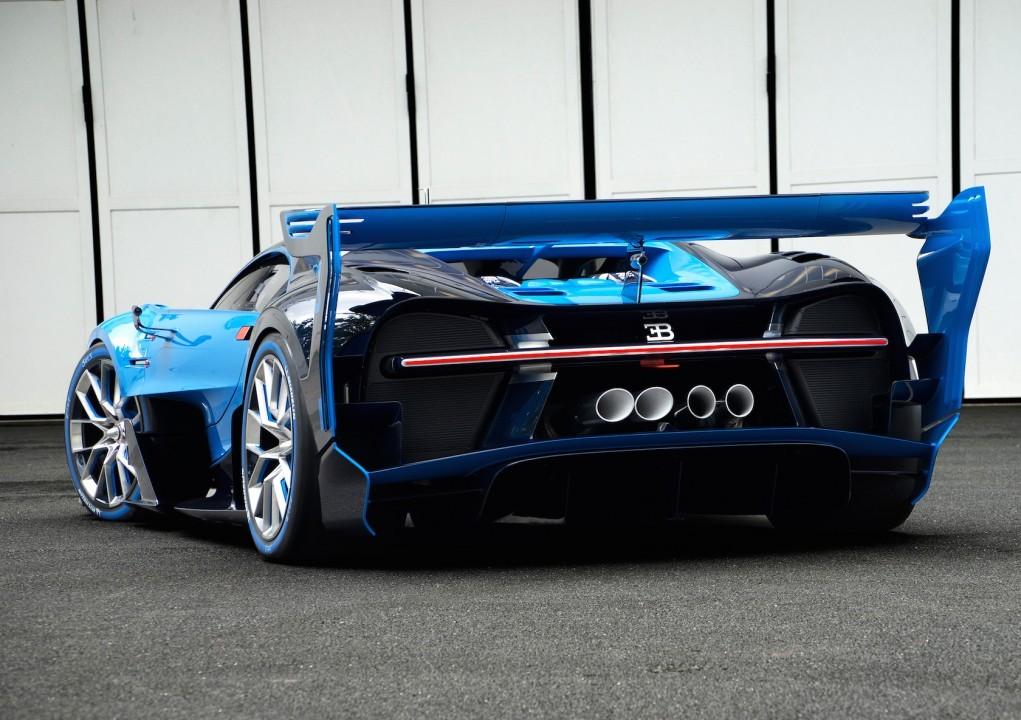 Though Bugatti’s ultra-exclusivity and high price tag ensure that only a select few will get to experience driving and owning a car bearing the Bugatti badge, the Vision Gran Turismo will open the nameplate up to millions of people worldwide. And while head of design Achim Anscheidt admits that the VGT is overstated, he also says “its progressive design language will clearly show the direction that Bugatti design will take in the coming years.”

Given the grandiose ambition of Bugatti’s virtual racer, needless to say, we’re excited. 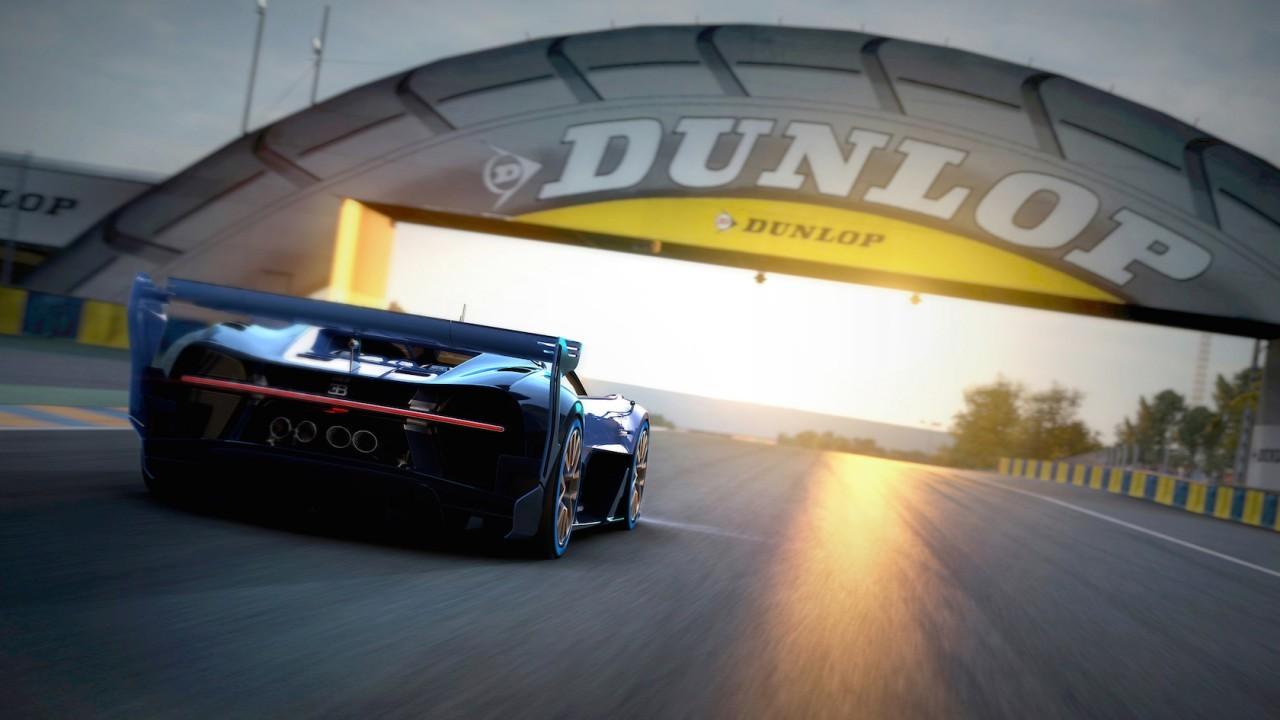 I recently had a chance to experience the Veyron’s unmatched G-force-shock at full throttle in Monterey during the Pebble Beach Concours. While several super cars can provide exhilarating performance, the outright acceleration of the Veyron’s 16 cylinders is simply peerless. And with Bugatti’s next gem set to put even more power to the wheels—and drop sometime next year—you can’t help us if we’re already a little giddy.

For now, we’ll enjoy the ‘Vision.’ And, someone please pass the PlayStation controller.

Update: Check out our live photos of the astonishing Bugatti Vision Gran Turismo!