Bluetooth speakers so vast they demand their own carry handle may trade portability for punch, but when social distancing says you can’t go further than the garden you might as well drag some music out there with you. Braven’s BRV-XXL/2 is one such example of high-volume company for the COVID-19 pandemic, and it’ll even be your drinking buddy too.

It’s not a small speaker, by any means. 22-inches long, 8-inches deep, and 9-inches high, it has similar measurements to an old-school boombox. It’s heavier, though, at more than 17 pounds. 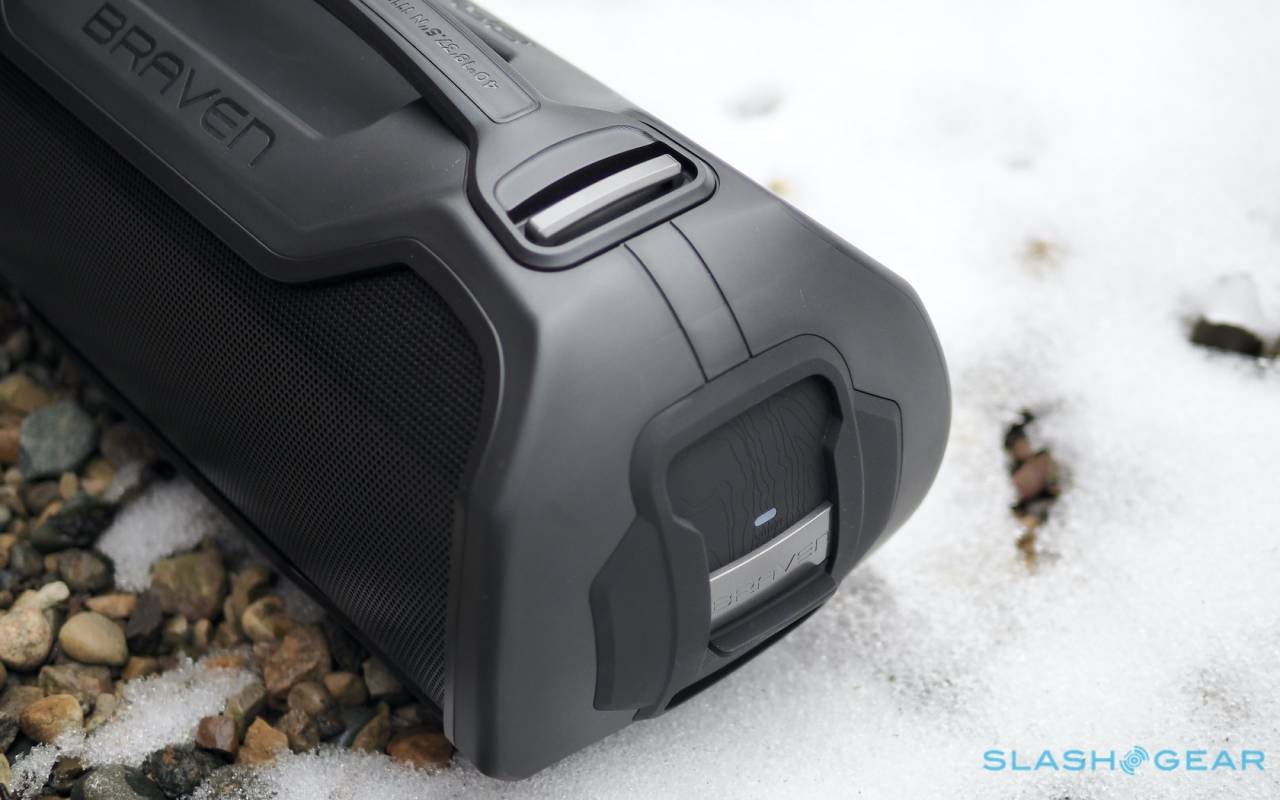 Braven sensibly includes a detachable shoulder strap, and there’s plenty of flexibility as to where you sit the speaker, too. It’s IPX5 rated, so can handle splashes of water and rain, though it’s not designed for actual immersion and instead will float. Not that you’d want to dunk it, anyway: that would muffle the five drivers.

There are four full-range drivers handling highs and mids, each with 15 watts of amplification, and arranged in pairs facing front and back. A 40 watt subwoofer points down, and then there are dual passive radiators.

The controls and ports are clustered on each end. On one side there are buttons for power, Bluetooth pairing, and play/pause, along with volume buttons that, when held, skip back and forth through your tracks. There’s also a broadcast pairing button, which allows you to link up to 100 BRV-XXL/2 together and have them all play the same thing. 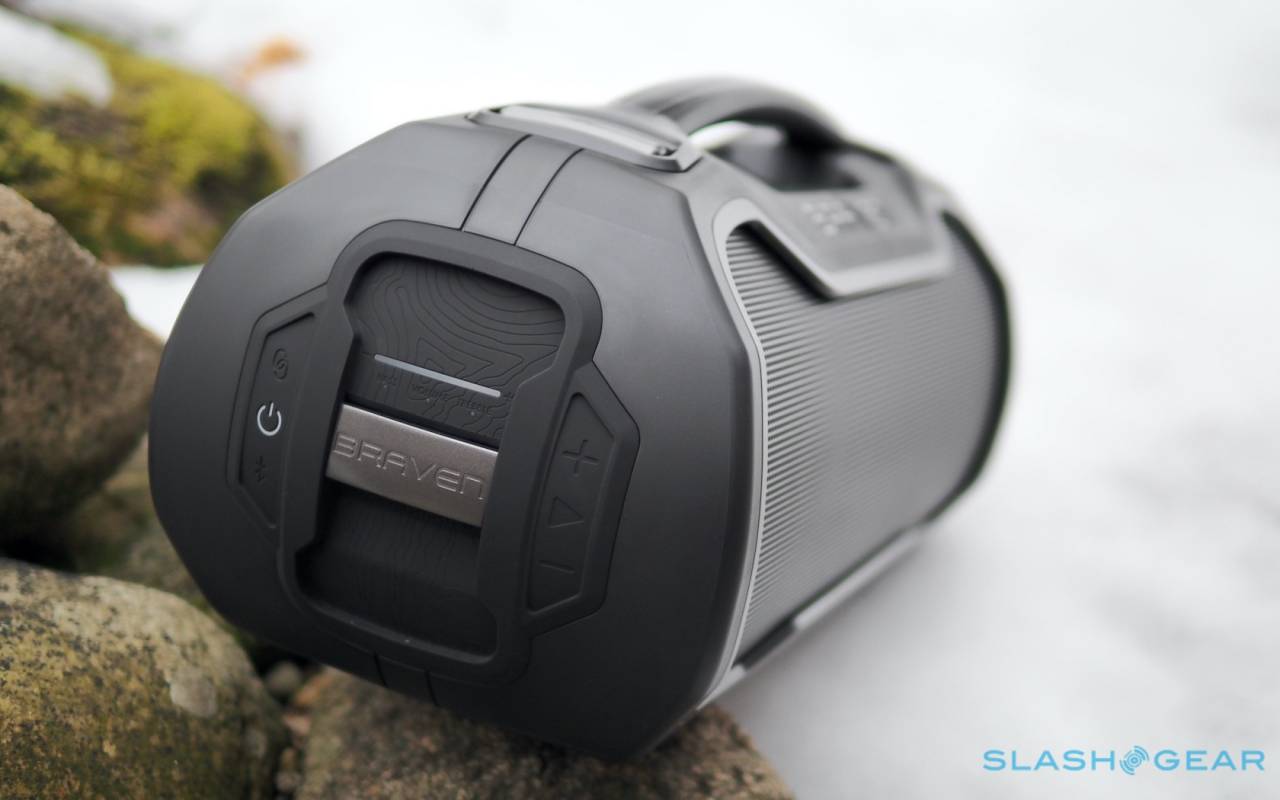 In the midst of the buttons is one of the speaker’s more charming features, a bottle opener. At the opposite end, meanwhile, there’s an LED to show battery status and, underneath a rubber flap, the ports. Along with an input for the power supply brick, there’s an aux-in for amplifying an external source via 3.5mm input, a microphone input for using the BRV-XXL/2 as an impromptu PA, and a USB Type-A port.

The latter only supplies power, at up to 2.4A, allowing you to tap into the speaker’s hefty 15,600 mAh battery and charge up your phone. If you want to use the Braven as one of the loudest speakerphones around, there’s a built-in microphone too. It’s not the clearest out there, but it does in a pinch. Pressing the power button answers or ends a call.

Using Bluetooth 5.0 to connect to a phone was straightforward, though I missed being able to easily switch between two Bluetooth connections as UE’s Hyperboom allows. There’s AAC and SBC codec support, but the Braven misses out on apt-X. 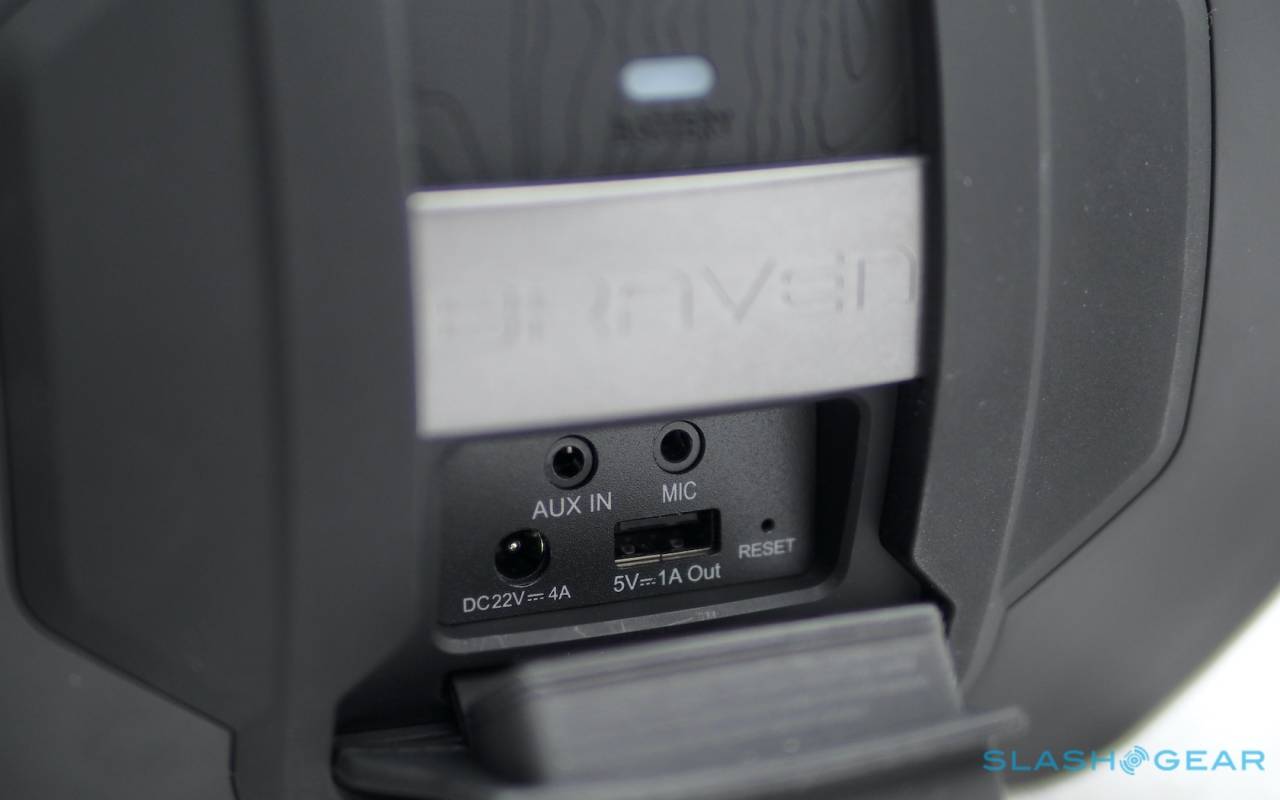 While you might not realize it at first, you can actually tweak the BRV-XXL/2’s EQ, and it doesn’t require an app (in fact there isn’t one). Tapping the power button cycles the +/- buttons through volume, treble, and bass modes, with LEDs showing which of those you’re adjusting. No, we’re not talking 10 bands of granular control here, but it’s enough to tweak things to suit your broader preferences.

Out of the box, there’s a lot of bass as I was expecting, but it’s just short of being overwhelming. Electronic, dance, and rap serve up great lashings of low-end, enough to get the Braven fizzing on its rubber footsies. Really, anywhere getting near to maximum volume is too much for use indoors; dialing things back allows the four drivers to weigh in and balance things out.

The high-end pops nicely, and the front/back positioning of the drivers means there’s less of a sweet spot to make sure you’re sitting in. If there’s a gap it’s right in the center of the frequency range, with piping vocals cutting through thumping bass, leaving instruments in the middle sometimes feeling a little lost. 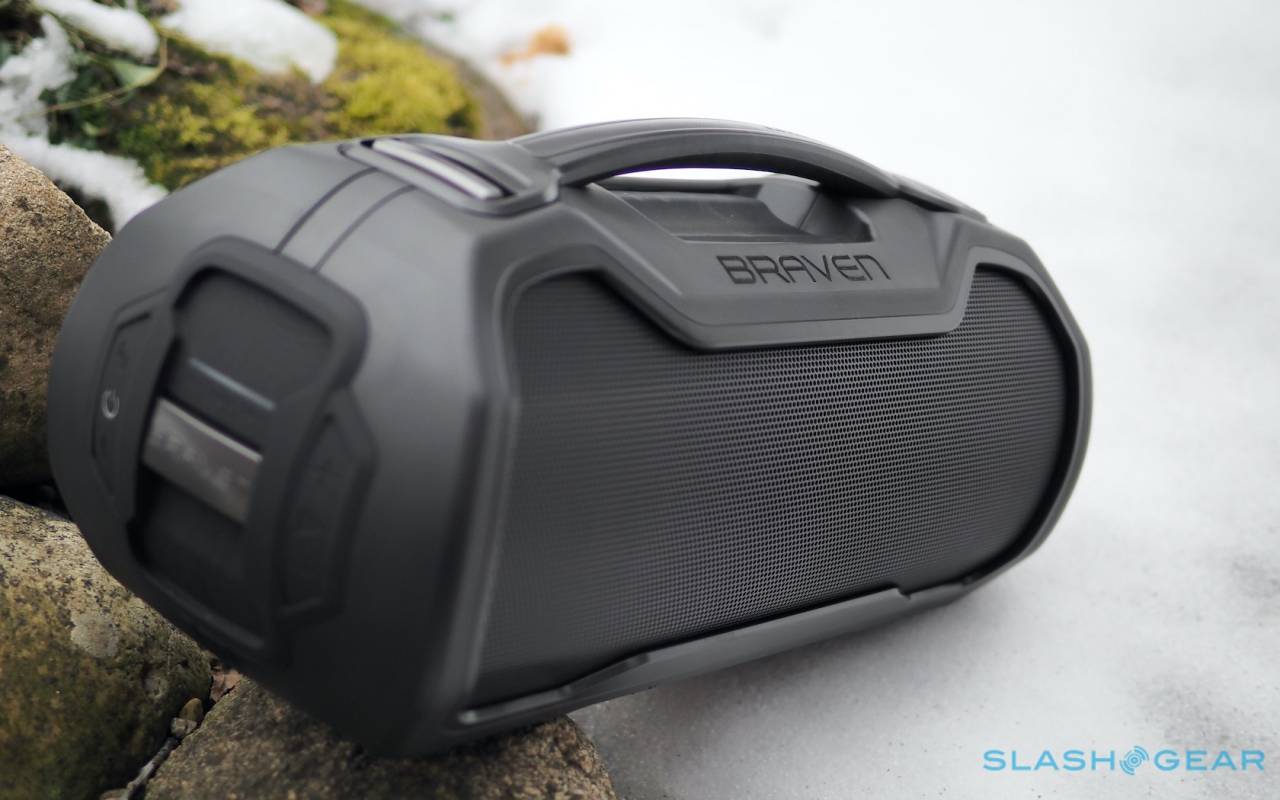 It suits the outdoors better, I discovered, where the emphasis on extremes makes it easier to contend with the absence of walls that would normally contain a speaker’s sound and boost clarity. Some natural light also makes it easier to see the speaker’s buttons, which with their black-on-black legends aren’t as easy to see as I’d like. The power button is illuminated, but the rest (which ironically I used more often) aren’t.

Braven says to expect 18 hours of use on a charge – assuming you’re not borrowing some of that to top-up your phone – though that will vary depending on how loud you have it turned up. The LED changes color, between green, yellow, and red, depending on remaining charge. I wouldn’t argue with a more granular display, since if you find yourself away from home and running low you probably won’t have the proprietary charger with you.

It’s not my only frustration. IPX5 is nice, but you need to have the rubber flap closed in order to achieve it. That means, if you’re using the aux-in or charging your phone from the USB port, you need to make sure the BRV-XXL/2 isn’t going to get splashed. 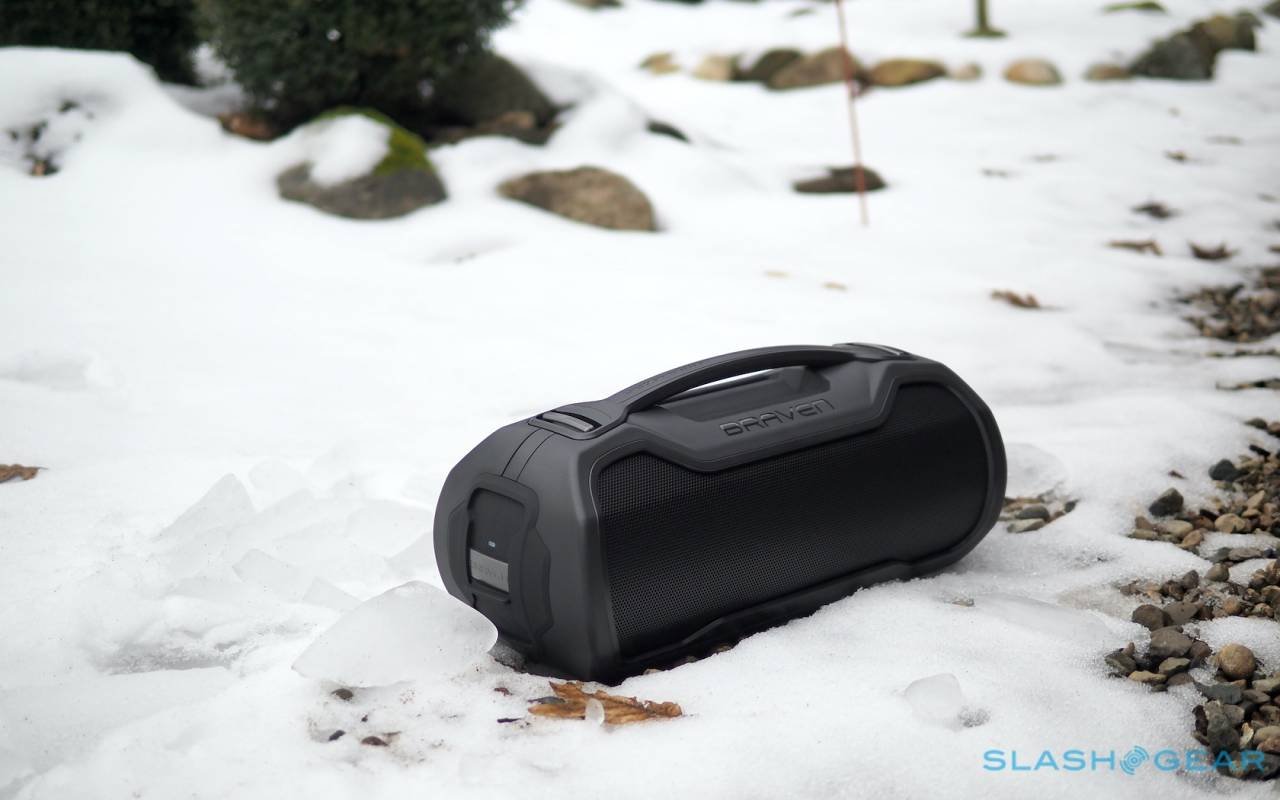 If volume – and bass in particular – are your primary requests, then Braven delivers. The BRV-XXL/2 is loud, and its subwoofer is a beast. The nice surprise comes when you realize it’s no one-trick-pony, and still has an unexpectedly balanced high-end to go with the rumbling.

My main complaints are around control, with Braven’s dimly-marked and multi-purposed buttons trickier than they need to be. Once you’ve actually queued up some tunes, though, there’s a lot to like here, especially since despite the $399.99 list price it’s easy to find the speaker at closer to $250. Kicking back, opening up a bottle, and settling into a bass-fest is a reminder of just where the BRV-XXL/2 shines.