The song was written and performed by MC Chris, and it’s called Fett’s Vette. The leak is related to The Book of Boba Fett, and it connects in a shockingly silly and entertaining way to the lyrics of the song. The song was originally released on an album in the year 2001 – so it’s not as if MC Chris knew he’d be predicting the future – but such is the way of things.

We’ll get back to the song in a moment. First, a Reddit user by the name of u/Wolfgeist has some 3rd-hand information from an actor who apparently had a role in the upcoming Book of Boba Fett as a bodyguard character.

Before we go any further, take note that we’re dealing with some extremely unverified and unofficial 3rd-hand information here, so we wouldn’t go making any big wagers with what we’ve got. At this point, the connection to the MC Chris song is entertaining enough to report on its own, even if the scenes do not end up appearing in the real TV show.

In the Reddit post series, it’s suggested that this actor took part in scenes where Boba Fett fought against a character called Hammerhead. It’s not clear at the moment whether “Hammerhead” is the name of the character or a code-name for the character until the show premieres.

According to the leaker actor, Boba Fett has 3 bodyguards including Fennec Shand and 2 Gamorreans. NOTE: Above and below you’ll see clips from a scene in The Mandalorian that teases The Book of Boba Fett. Hammerhead apparently has 3 bodyguards as well, at least one of which is likely humanoid. The same source suggests that Hammerhead is an Ithorian.

Now, we take another look at the song Fett’s Vette by MC Chris. The song’s lyrics include the following:
• They got the Death Star, got four payments on my car
• Hand it over to Hammerhead at Mos Eisley bar
• He used to carjack, now he’s a barback
• Just goes to show how you can get back on the right track

Hammerhead is the nickname given to the first Ithorian we see in the Star Wars universe. We see him in Mos Eisley, at Wurhur’s Cantina. He was an unnamed character in the movie, then became “Hammerhead” when he was first turned into a Kenner action figure. He was given the name Momaw Nadon in the 1989 Star Wars Galaxy Guide 1: A New Hope, made for Star Wars: The Roleplaying Game. 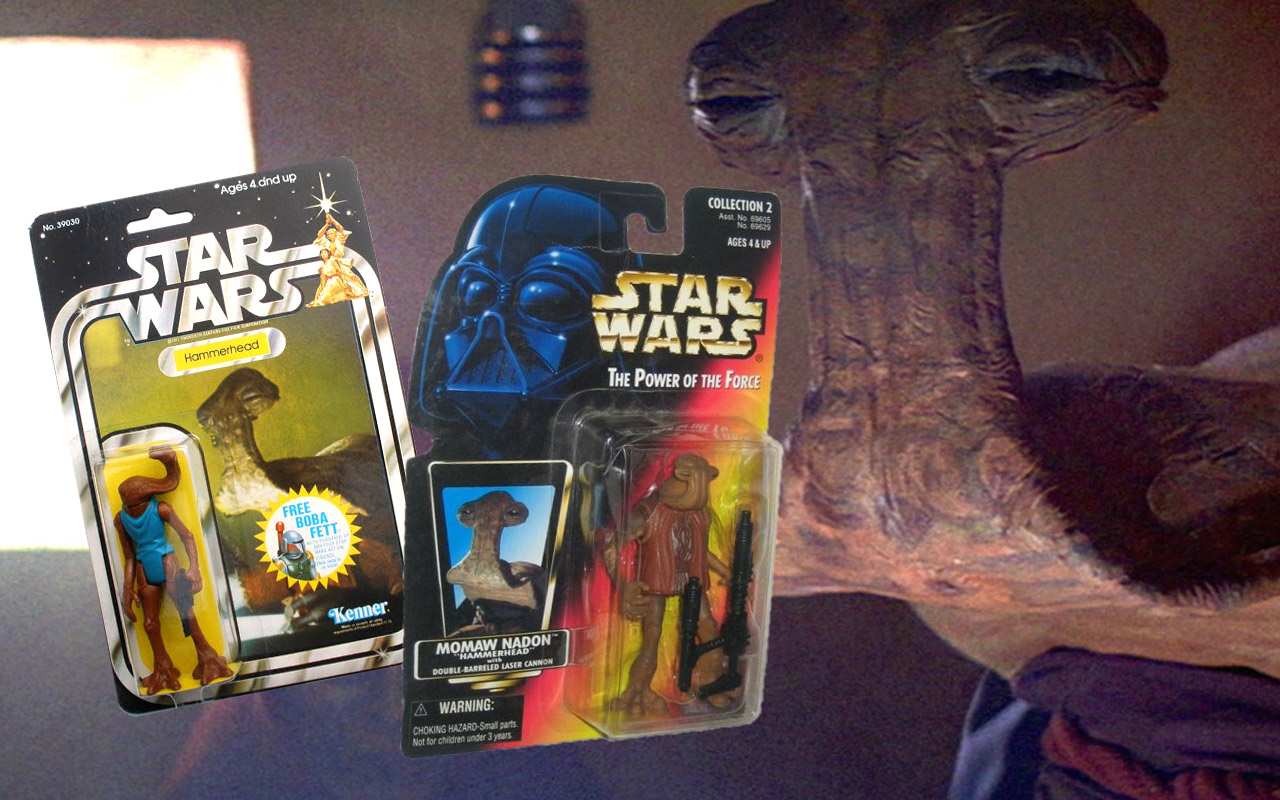 Cross your fingers that this traditionally peaceful character has found a reason to pop up in The Book of Boba Fett. It’s unlikely he’ll be a carjack, but he might be a barback! We know the Cantina’s run by droids at this point in history, so it’ll need to be at a different establishment – but it could happen!

The first episode of The Book of Boba Fett is expected to be released in December of the year 2021. It’ll be here before you know it!