The Mandalorian Season 2, episode 8, The Rescue, had a post-credits scene. Before we go too far, know this: This article is jammed full of spoilers. If you have not seen the end of the last episode of Season 2 of The Mandalorian, turn back now. If you love Star Wars at all, whatsoever, please do yourself a service and watch that episode before you look at this article. This is your final SPOILER ALERT.

Where are we, when is this?

The scene opens on twin suns. This being Star Wars, we know that a pair of suns seen from a planet covered in sand means we’re on Tattooine. Pan to the left we see what once was Jabba’s Palace. We quickly recall that we’re seeing this scene takes place approximately 5 years after Return of the Jedi. 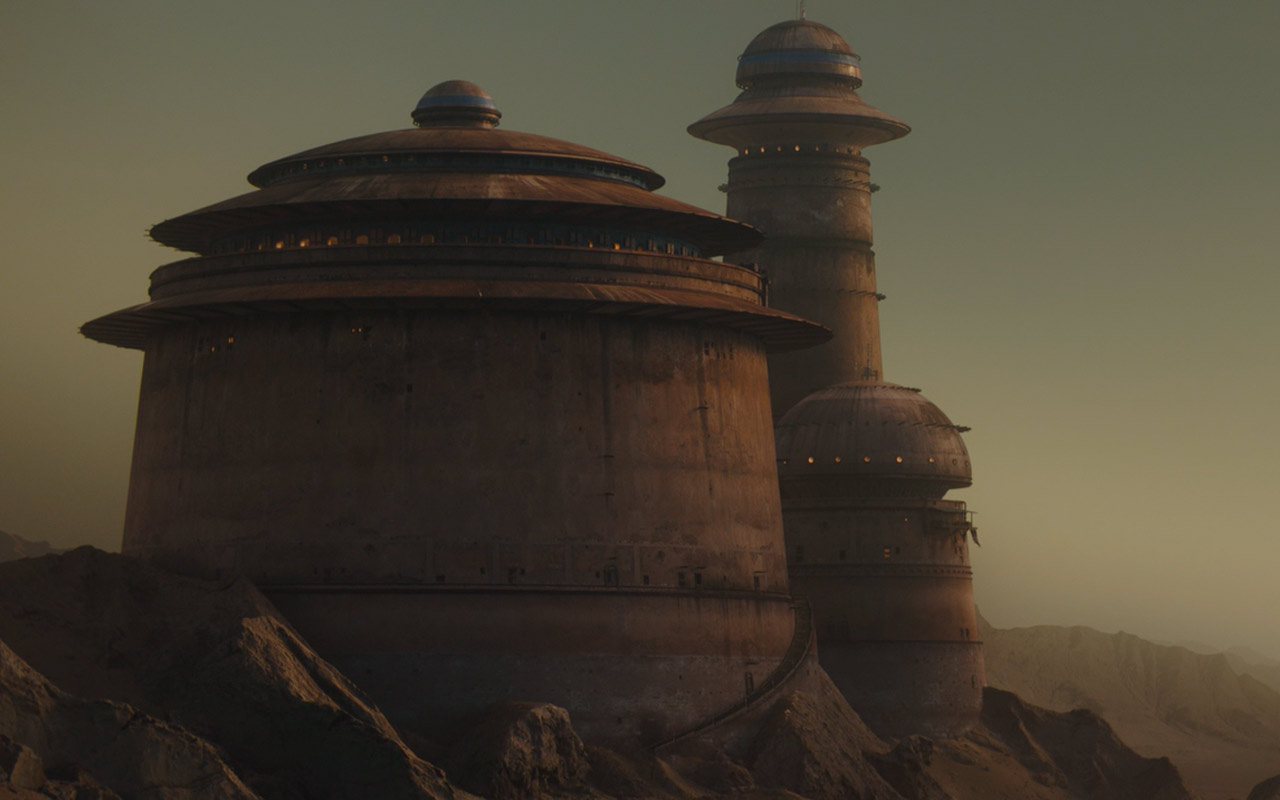 There are several creatures in this scene – most of them are unimportant. But we’ll take a peek at each anyway. Cross your fingers the ones that don’t immediately die get their place in the rabble come next winter.

The chained dancer character here reminds us of the character Oola, from Return of the Jedi. Both were Twi’lek, as characterized by the pair of lekku (appendages) protruding from their skull. Per Star Wars: The Complete Visual Dictionary (2018), this Twi’lek skin tone (blue) is called Rutian.

Given the current Star Wars production propensity to incorporate characters in shows or movies that’ve popped up in the past, there’s a decent chance this character is one of the several Rutian Twi’leks we’ve seen before.

It’s probably not Jedi Master Aayla Secura, since she was killed on-screen. Kaasha Bateen appeared in the novel Last Shot and COULD be age-appropriate, given the novel’s timeline. Slightly older but still within reasonable age to tie in here are the twin masseuses Ann Gella and Tann Gella. They appeared at the Boonta Eve Classic race in The Phantom Menace – the idea that they’d still be sticking around Jabba’s Palace all these years later is… less plausible.

The most likely scenario here is that this character is meant to represent the continued oppression of gang leadership after Jabba’s death. If we had any question about whether Bib Fortuna was a better leader than Jabba, this character confirms the answer: no, absolutely not.

It’s interesting to see a Weequay here after Jabba’s death, given what we know from the Star Wars novel Bloodline. In it, we find that many Nikto species filled the void left by Jabba, celebrating the death of the hutt as they created their own crime syndicate.

It’s unlikely this is any Weequay we’re supposed to recognize. As is often the case with gang member characters in Star Wars, this fellow is here to die. NOTE: There’s another one of these guys in the background – right next to a very well-hidden jawa!

This very large Twi’lek seems to have replaced his former master’s place, both figuratively and literally. We know Twi’lek males tend to get larger (and rounder) as they get older – but this rather radical change is likely in place to describe a rapid descent into decadence and sloth.

As noted above – it’s strange to see a Nikto here, given their reorganization into alternate crime families after Jabba. But this is the modern age of Star Wars, and every character can act how they like, break with tradition, etc. – as The Mandalorian has indicated throughout the series.

This dude. He’s been hanging out at Jabba’s Palace since Return of the Jedi and was present on Jabba’s Sail Barge when it crashed. If it weren’t for the appearance of Bib, proving it was POSSIBLE to survive that event, I’d say Ree-Yees was dead. If I had to bet, I’d bet this was meant to be Ree-Yees.

This character with bright red hair is almost certainly meant to be Rystall Sant. She’s a Theelin, or a human-Theelin hybrid, depending on who you ask. She appeared in the film Return of the Jedi, singing “Jedi Rocks” in the modern version of the film (starting with “Special Edition”).

Rystall notably ALSO appeared to have garnered the affections of one Boba Fett in another scene in Return of the Jedi. She was the character whose face Boba Fett touched before he returned to the fray, just before the bunch headed to the Sarlacc pit. 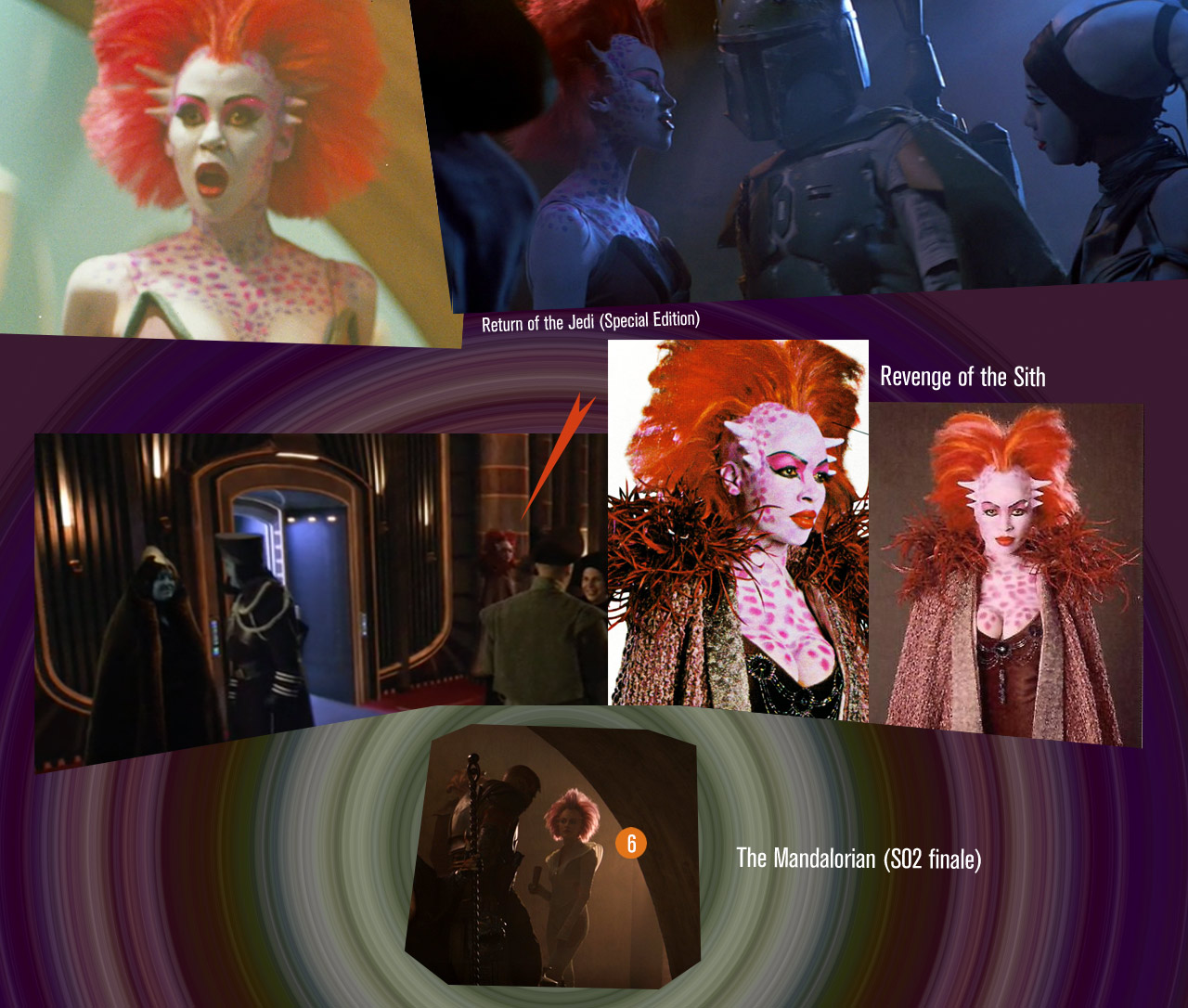 Rystall Sant was included in the official Lucasfilm-made Star Wars Visual Guide for Star Wars: Revenge of the Sith. Thanks to the screenshot above from FanGirlBlog back in 2017, we know Rystall was actually in a scene in Revenge of the Sith, too. There’s a very good chance this character at the palace is, once again, Rystall Sant.

We’ve seen some of these creatures in an earlier episode of The Mandalorian, when he dropped by the planet Mon Calamari for a fun time on the high seas. If we’re to assume this is the same Quarren that was known to hang out at Jabba’s Palace in the past, this is Tessk.

The big pig guards you see walking around at the beginning of the scene, rolling down the stairs, attempting to defend Bib… they’re all throwaway Gamorrean guards. They’re cannon fodder, as they’ve always been.

Fennec Shand and Boba Fett are the new bosses of this palace, and likely the new lords of a future crime empire. Per The Mandalorian, “The Book of Boba Fett” will be “coming December 2021.” Take a peek at additional Mandalorian episode explorations in the timeline below, and stay tuned as we stay on-point with the Star Wars in-depth action through the future!