Belkin’s WeMo smart home platform is getting new devices to control, with Holmes throwing an air purifier and a pair of room heaters into the mix of phone-connected gadgets. The Smart Air Purifier is, outwardly at least, a regular HEPA filtering purifier, but thanks to an integrated WiFi connection it can be remotely monitored and controlled from Belkin’s WeMo app. From there, not only can it be powered on and off – even if you’re not home, current quality ratings can be read and schedules set.

The fan and ionizer can be monitored and controlled independently from the app, as well as up to a week’s worth of daily run times be preset.

The purifier can also fire off a warning when its filters need replacing.

Meanwhile, two sizes of Smart Heaters – Large and Extra-Large – are getting the WeMo upgrade, each supporting power on/off and temperature adjustment from the app. A week’s worth of scheduling can also be established. 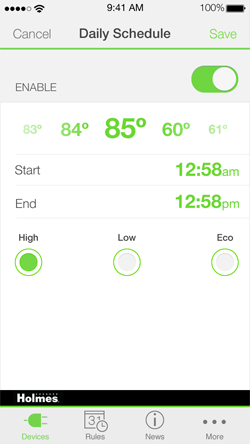 Four modes are offered – High, Low, EcoSmart, and Frost Protect – with EcoSmart cycling between high and low so as to maintain a certain temperature, while Frost Protect only kicks in when the ambient room temperature dips under 40 degrees F.

While purifiers and heaters might not be as ostensibly “sexy” in home automation as magical locks that open when you get near the door, or lighting that changes through a myriad of colors, they’re arguably more readily understood by general users.

Belkin and Holmes are both playing up the potential energy – and thus cash – savings possible by having more granular control. For instance, a heater could be remotely turned on when the user leaves the office, ensuring their apartment is toasty when they get back without having to leave it running all day.

Previous WeMo-enabled appliances include a Mr. Coffee drip machine and a Crock-Pot. However, Belkin also has remote-control bulbs and outlets.

As for the Holmes Large Room Smart Heater, that will ship in mid-December for $149.99, while its Extra-Large sibling will arrive at the same time for $199.99.