If obsessively glancing at the power meter in your MacBook’s status bar is giving you eye-strain while you’re away from an outlet, it might be time for an external battery. Not every power pack is created equal, however, and BatteryBox claims not only to have made a smarter and much longer-lasting battery, but one which neatly works with Apple’s proprietary MagSafe connector, too.

Most external batteries are flat and broad; BatteryBox is shorter and narrower, but thicker as a result. At 2.48 x 1.92 x 3.74 inches and 14.25 ounces it’s a little larger and a little heavier than a can of Coke. 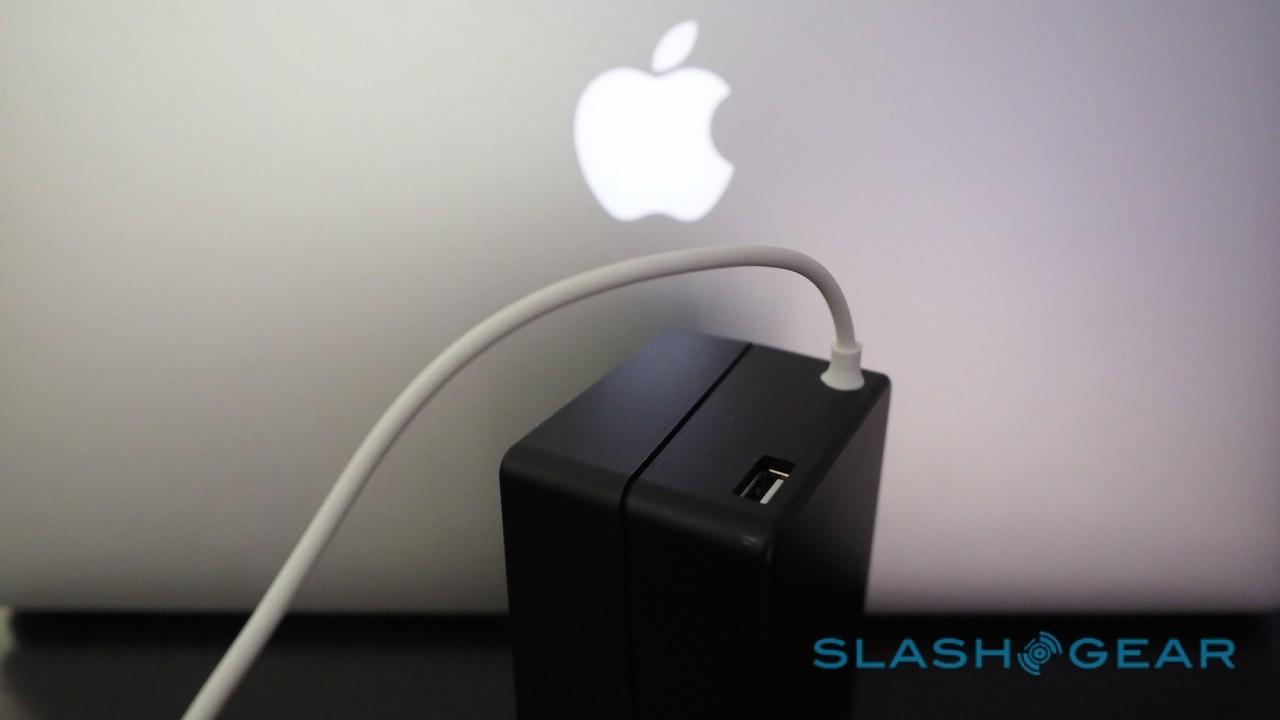 BatteryBox’s first distinguishing feature is its SnapFit connectors. Since Apple has patented its MagSafe plug – and demonstrated it’s not unwilling to sue anybody using the magnetically-clinging connector without permission – the company needed to come up with something with the same sort of flexibility but that doesn’t rouse the Cupertino lawyers.

SnapFit is the answer, a plastic clip shaped like a lower-case “b” and into which BatteryBox’s charging cable slots. By hooking over the top corner of your keyboard, SnapFit keeps the pogo-pins in contact with the MagSafe connector. 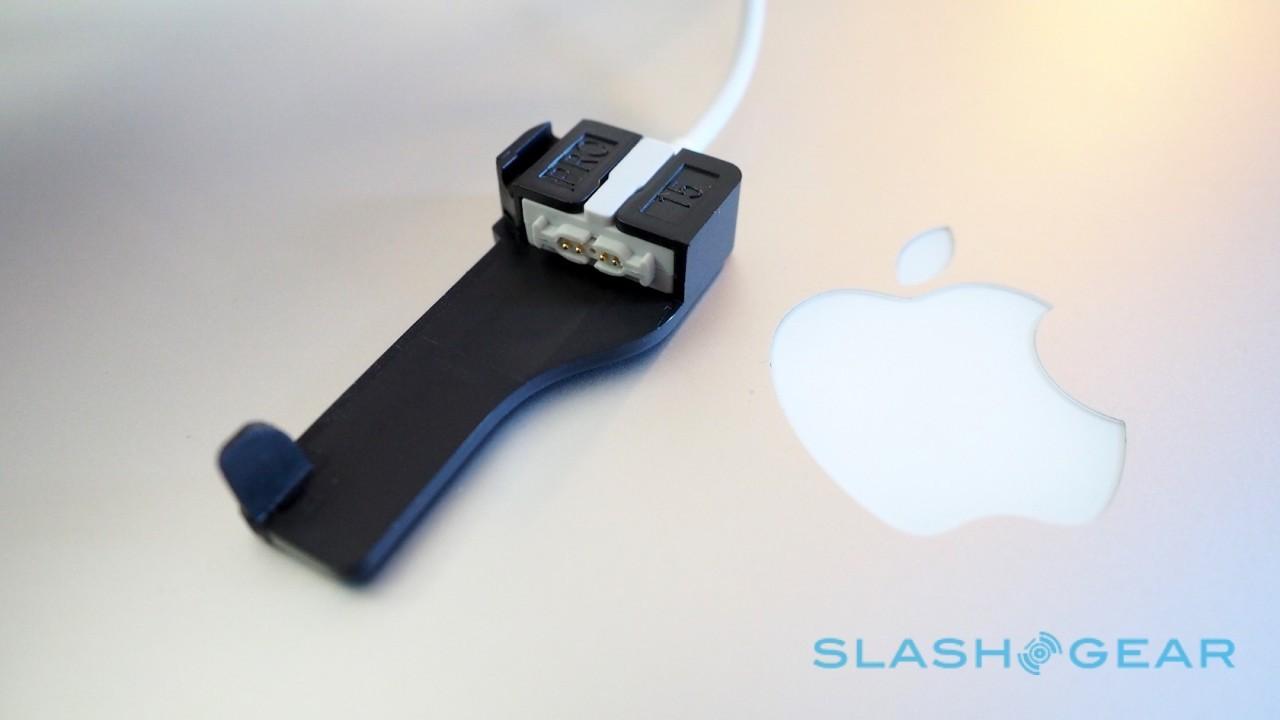 The power cable – 18-inches long from BatteryBox to plug – clips into place firmly, though is readily switched between SnapFit adapters if you have different MacBooks you want to power. 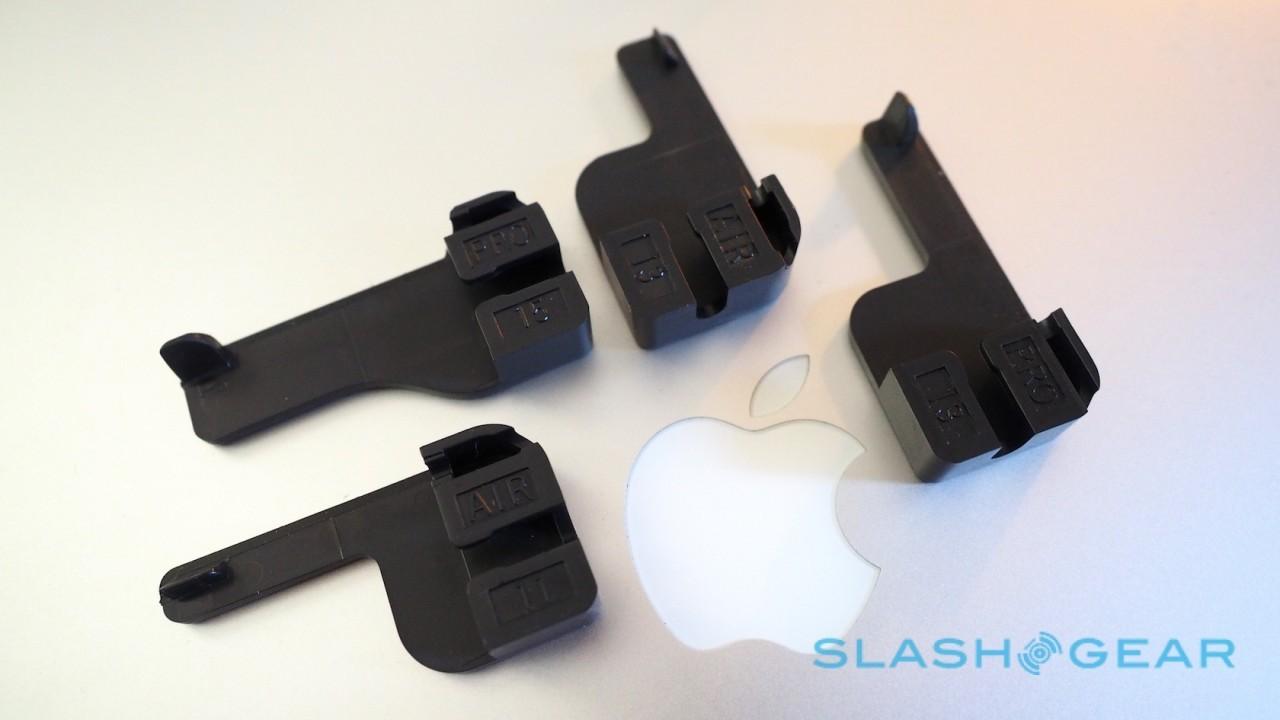 Obviously it’s not as elegant a system as Apple’s own, but it works surprisingly well. Clipping it on is a matter of lining up the pins and then hinging the top arm down, while pulling it down at an angle removes it.

What you can’t do is close the laptop lid with SnapFit in place, though there’s a thin rubber edge to hopefully avoid scratching your display if you forget. Still, I’d recommend getting into the habit of removing it before you slam the lid down. 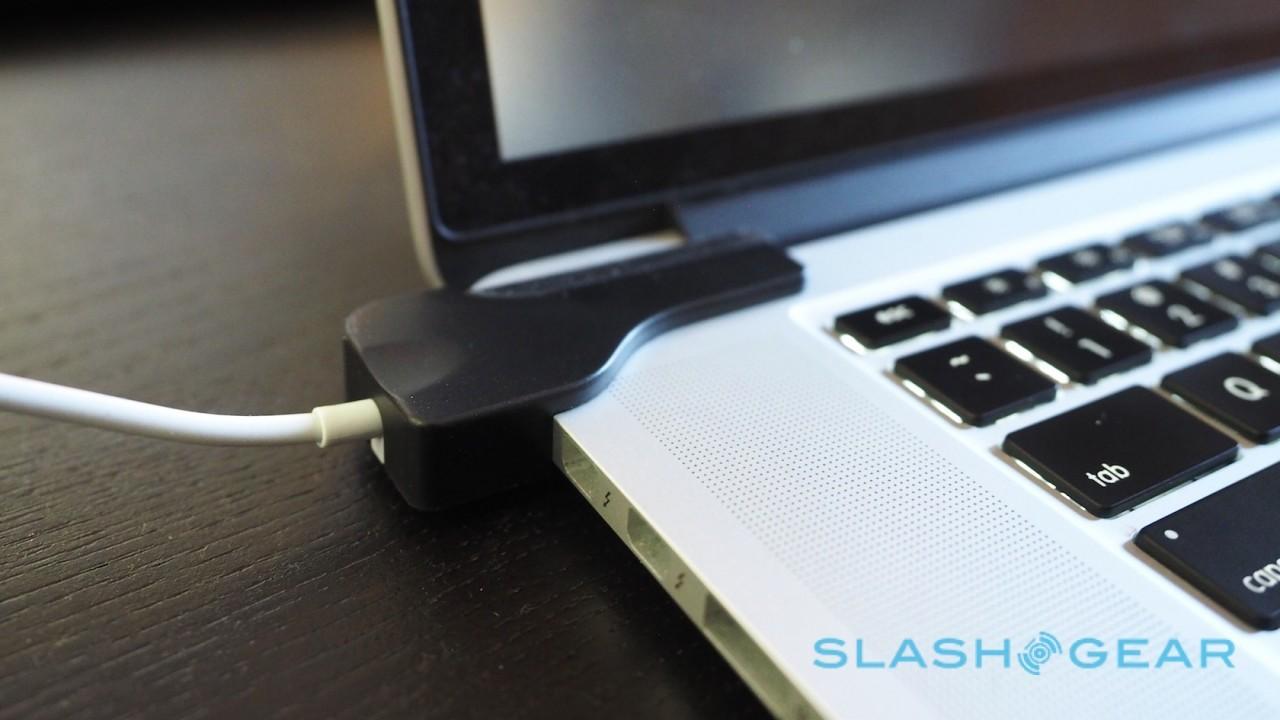 The other thing that divides BatteryBox from most other external batteries is that it doesn’t actually set out to charge your MacBook. Instead, the little black brick powers your laptop but won’t top up its internal battery.

That might seem counterintuitive, but there are some good reasons for it. What most people will be interested in is the claim that it keeps both BatteryBox and your Mac’s batteries healthy for longer. 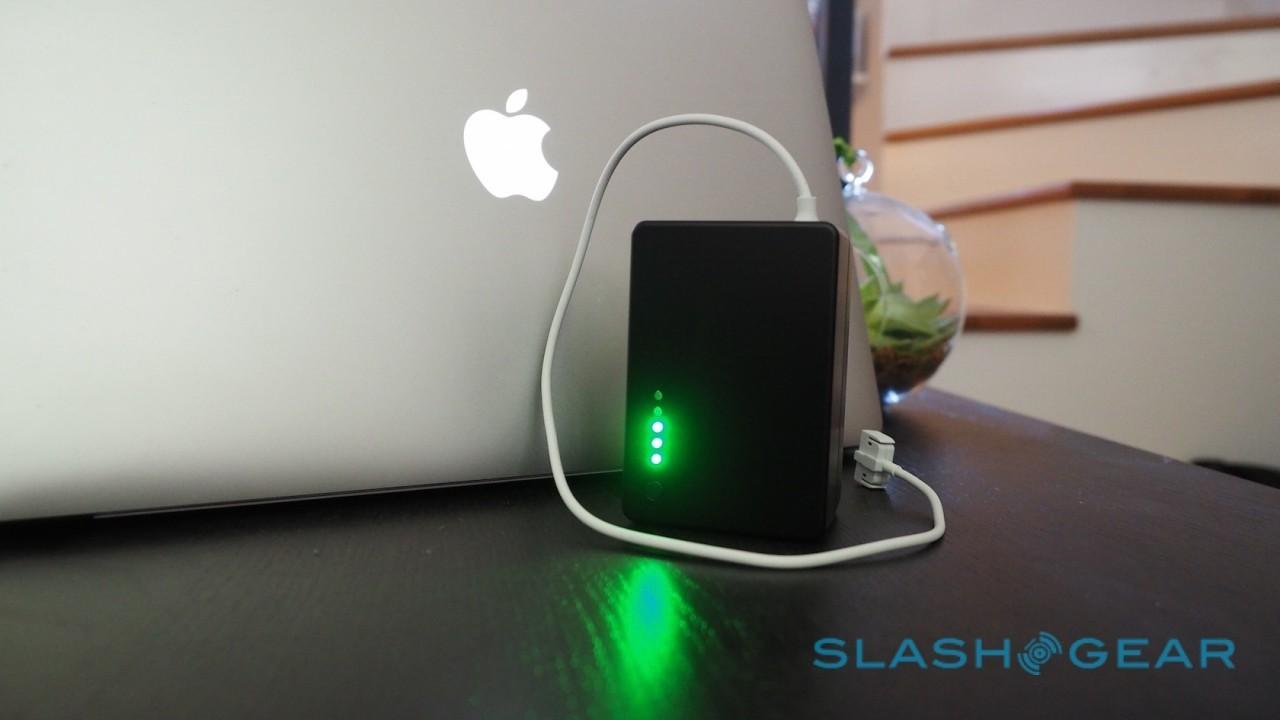 On the notebook side, that’s because by directly powering the computer you’re avoiding needless recharge cycles on its own batteries. Inside BatteryBox, meanwhile, there’s actually a separate BatteryOS running that promises to squeeze out as much as 40-percent more power than rival batteries courtesy of more intelligent charging algorithms.

BatteryOS also monitors things like temperature, voltage, average current, cycle count, and overall battery health, supporting what’s in effect a crowdsourced research project. Makers Gbattery claim they’ll be able to use those stats to improve the algorithms over time, not to mention promising more than 3,000 recharge cycles, as much as a tenfold increase over rivals. 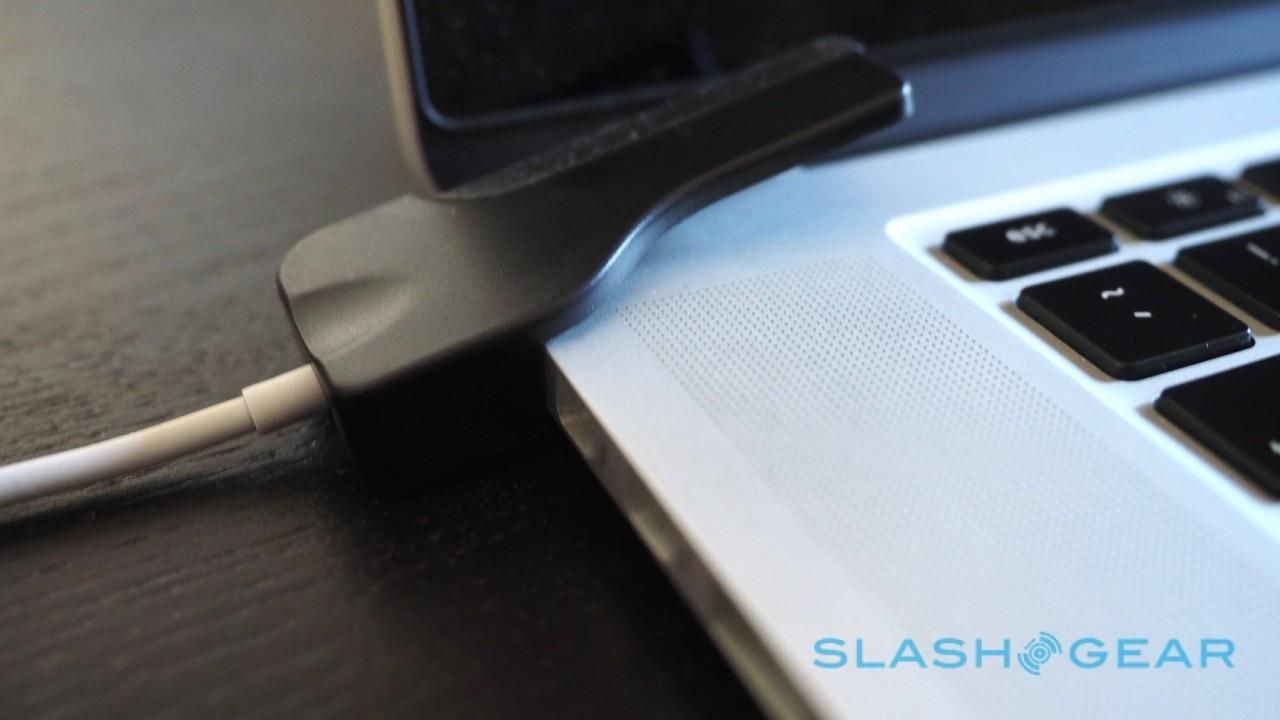 In my tests with a MacBook Pro 15, I got 2-4 hours of use, depending on what I was using the notebook for. Just like graphics-intensive applications will drain your MacBook’s battery faster than, say, just browsing the web, I ran through BatteryBox’s juice swifter if I was doing video processing. 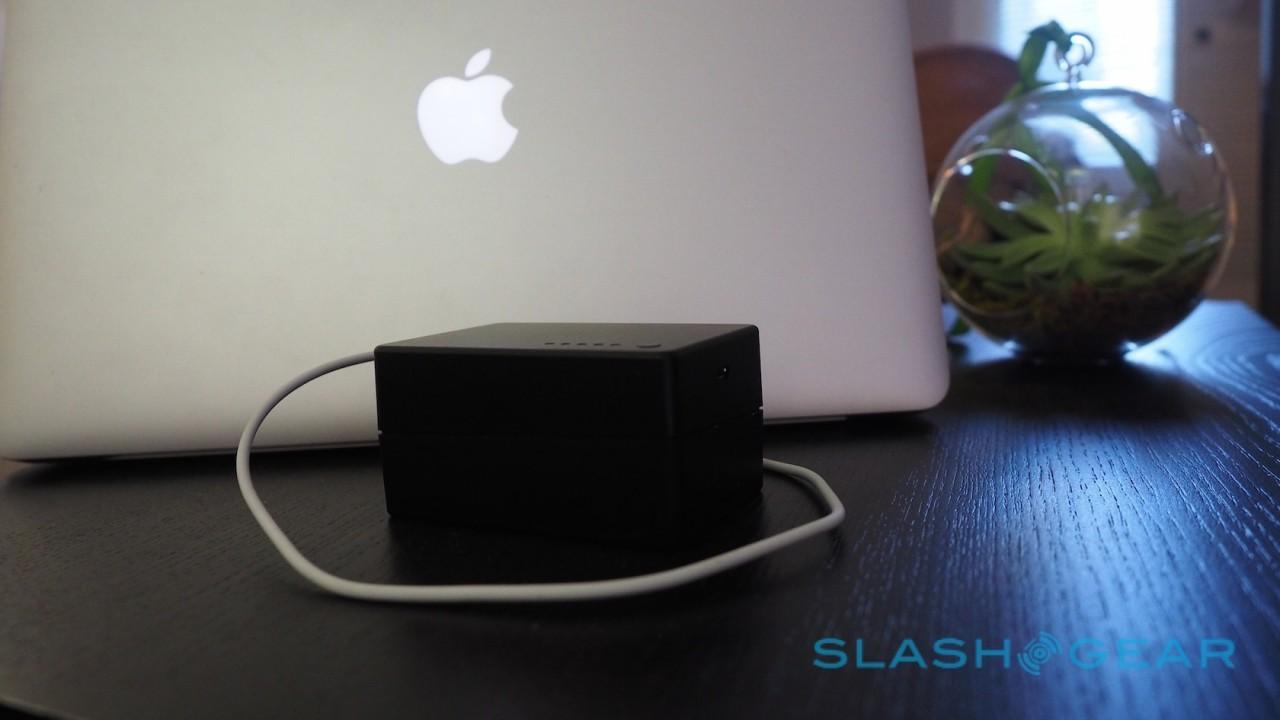 Plug in a Lightning or microUSB cable to the USB port, meanwhile, and you can charge up mobile devices, too. There, the suggested numbers are 22hrs of extra iPad Air use or 25hrs of iPad mini, 75hrs of iPhone 6 use, 127hrs from your Nexus 5, or 50hrs from your Galaxy S5.

Actually keeping track of what power is left is down to five green LEDs; in an ideal world there’d be something more detailed, maybe even a tiny e-paper display. Recharging is via microUSB, with a 5V 2.1A adapter in the box. There’s a little wiggle in the microUSB socket, though I haven’t had any ongoing issues so far in testing.

Unfortunately, while I had good results with a 15-inch MacBook Pro, I couldn’t use BatteryBox with my primary travel companion of choice, the 2015 MacBook Retina. That uses USB-C to recharge, not MagSafe, and currently the USB port on the external battery only delivers the typical 5V 2.1A output, insufficient to power Apple’s ultraportable.

The good news is that Gbatteries tells me they’re working on a USB-C solution, though there’s no word on when it might be released. 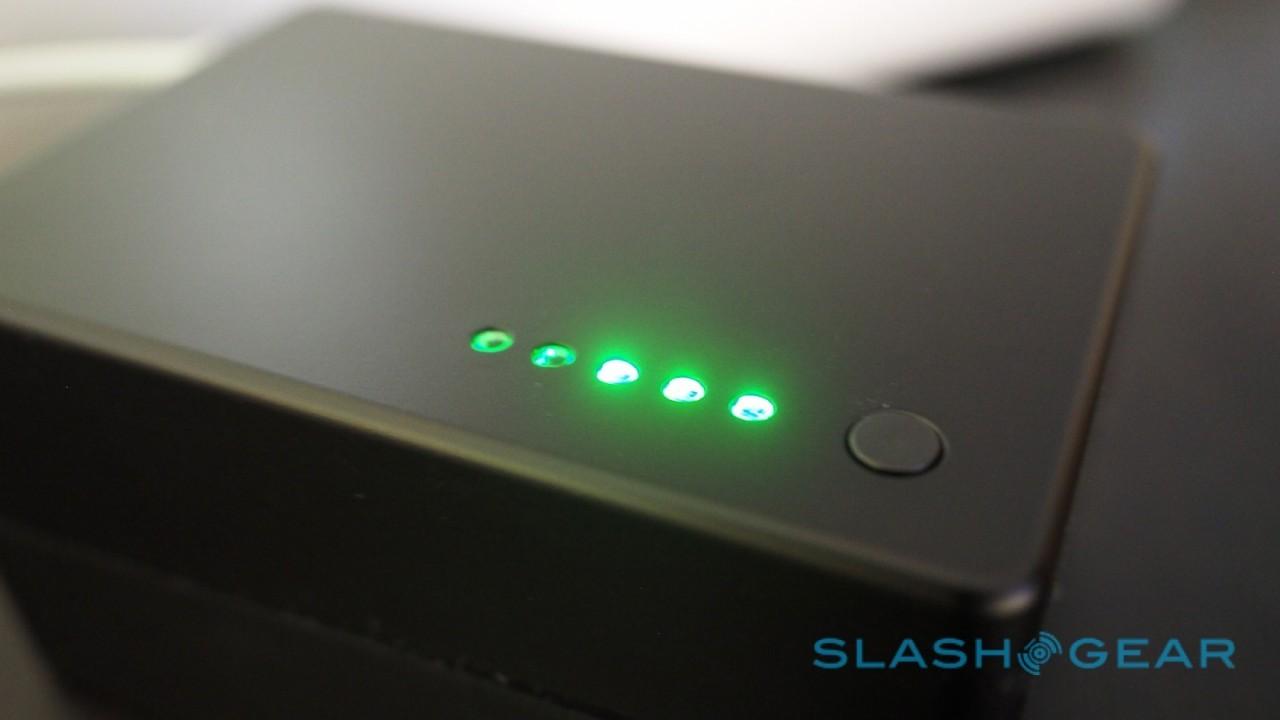 My other concern is the fixed power cable, and how well that will hold up after being thrown into a rucksack or suitcase for an extended period. It doesn’t feel weak, but I’d prefer to see a removable design that would make replacing it – or alternatively switching it with a longer cord – more straightforward. 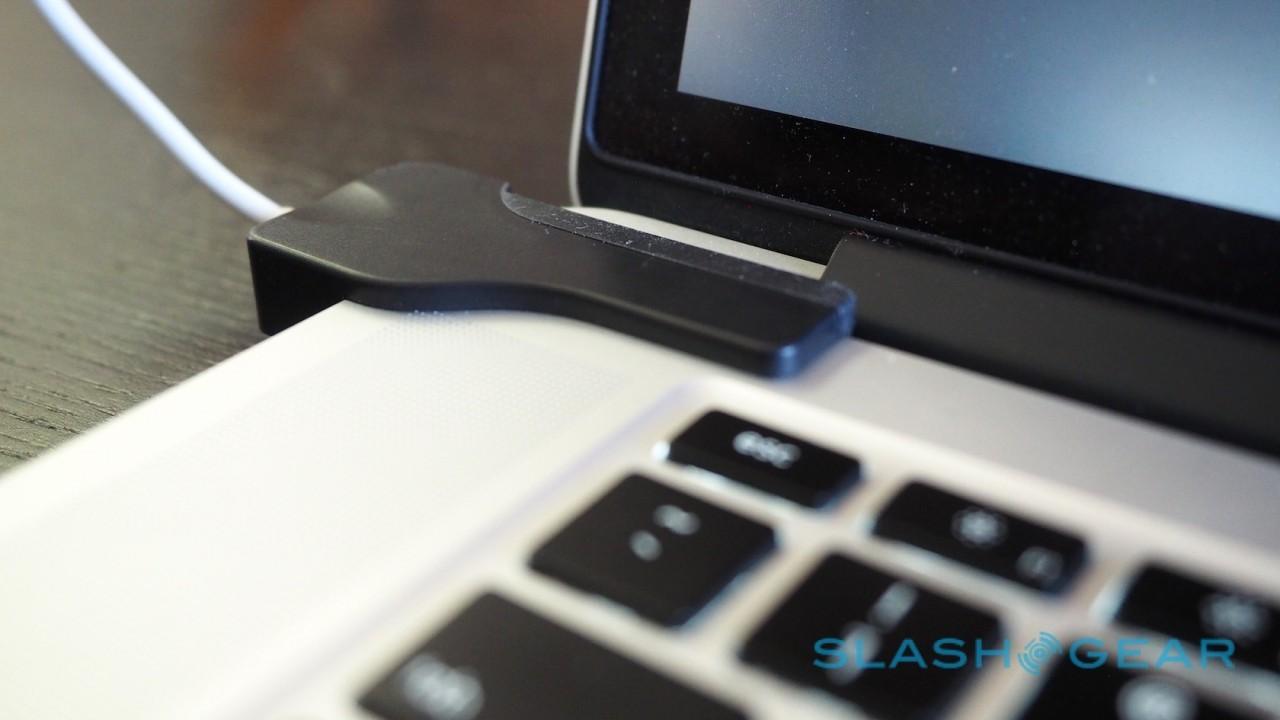 Then there’s the price. At $219.99, it’s more expensive than some rival external batteries; you can find 20,000 mAh examples for around $100, though they don’t promise anywhere near the same number of charge cycles. Chugplug’s somewhat unwieldy adapter daisy-chains onto the end of Apple’s power brick, while Hyperjuice either requires you to splice your MagSafe adapter onto its cord, or buy a third-party adapter.

Whether BatteryBox is worth it for you likely depends on what type of MacBook you’re using. With a power-hungry MacBook Pro 15, a small handful of hours extra aren’t quite as impressive as the boost I’d get were I a MacBook Air owner, or had the MacBook Retina USB-C adapter been available now. When the latter arrives, though, I could see BatteryBox becoming a regular in my bag. 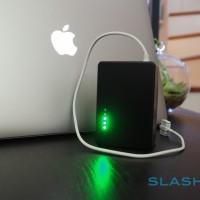 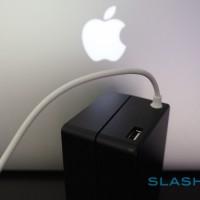 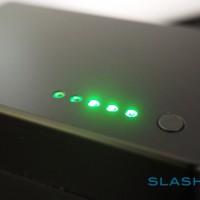 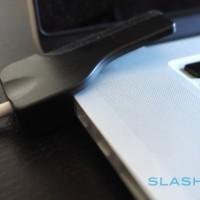 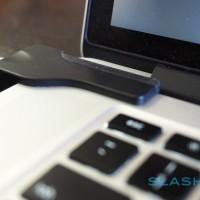 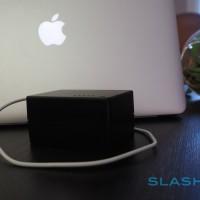 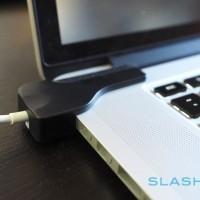 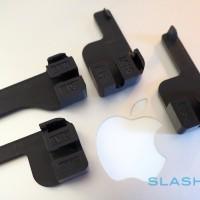 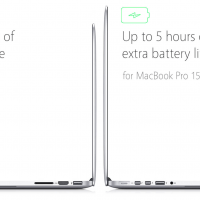 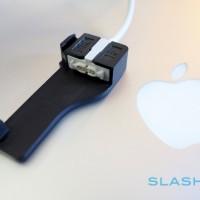