DC Comics fans at San Diego Comic-Con were treated to the ultimate bit of fan service on Friday night while waiting for next morning’s panel on the new Batman v Superman movie. Some of those in line the longest had reportedly been waiting 10 hours or so, and at around midnight, when their surprise arrived, everyone still had another 10 hours to go until the panel started. It was during this moment that none other than the new Batmobile roared down the street, coming to a stop in front of the building, with director Zack Snyder behind the wheel.

The whole thing was obviously planned, as the Batmobile was accompanied by several police cars, but it really was something nice for the fans. When Snyder exited the car, he began throwing T-shirts adorned with the new movie’s logo into the crowd. 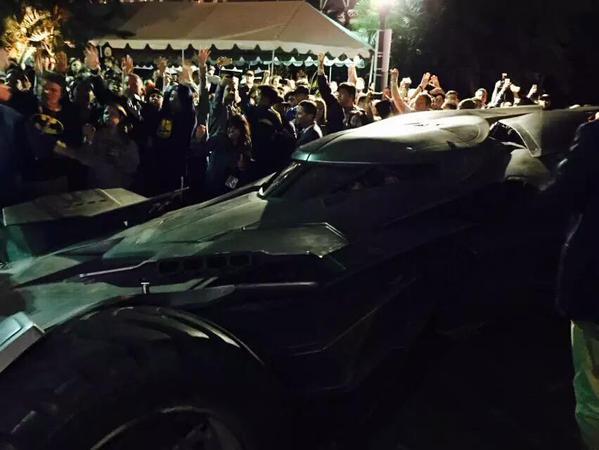 It’s not clear how long the director hung around, but you can check out the arrival via cell phone footage shot by those who witnessed it.

At the panel the next morning, Warner Bros. released a new trailer for Batman v Superman: Dawn of Justice, full of new footage and story teases. We learned that the new movie largely takes place after Man of Steel, the previous Superman film, and were given hints about why Batman is out to stop Superman.

The new Batmobile was first unveiled in an official capacity last month, but the events at SDCC marked the first time fans could see it in action on the streets. Those of us who weren’t there will just have to wait until the movie’s March 25th, 2016 release to get our own look at the vehicle.