With the massive uptake of smartphones, the wristwatch market has been strong as it once was. The watch market has recently begun to turn around with all the talk of smart watches such as the Samsung Galaxy Gear. What may be the strangest wristwatch ever has surfaced from a company called Bathys Hawaii and the watch is known as the Cesium 133.

The bulky device you see here is an atomic wristwatch. This isn’t to be confused with some of the a atomic watches that have been on the market in the past that sync via a radio signal to an atomic watch in a remote location. The Cesium 133 watch actually has all the components a true atomic watch needs to operate inside the rectangular metal enclosure. 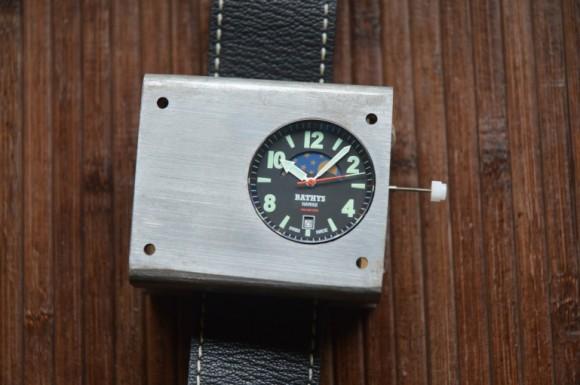 Bathys Hawaii founder Dr. John Patterson designed the Cesium 133 with cooperation from engineer George Talbot. The duo used the same principle of counting hyperfine lines of excited cesium 133 atoms used by the National Institute of Standards and Technology for its atomic clock. What that technology allows is incredible accuracy on a wristwatch in the area of 1 second per 1000 years.

Inside the rectangular metal enclosure of the Cesium 133 watch is a laser, a heater, a sealed cavity of cesium gas, a microwave filter, and a photodiode detector. The watch is large and gets power from standard lithium-ion rechargeable batteries. All the technology crammed inside the watch that is required for the incredible accuracy means that the watch can only run for a few hours per charge. The company plans a future version that is smaller and has better battery life. The current Cesium 133 watch has a retail price of $12,000.