The Avengers have arrived in the Disney Infinity universe, bringing with them a word on how an open-sandbox model will work with their mighty hand upon the trigger. Disney Infinity is a game which, like Skylanders, uses physical toys to activate virtual-reality characters in the game. This Avengers Playset expansion heralds the second coming of the title – a whole new world, as it were.

The set being shown off here is the Disney Infinity (2.0 Edition) Marvel Avengers Play Set. Users will be able to pick up the Marvel Super Heroes (2.0 Edition) Starter Pack to begin their collection, this set including Toy Box 2.0 as well as Iron Man, Thor, and Black Widow.

The Hulk, Hawkeye, and Captain America will have to be purchased separately once the whole collection is released. With this expansion, your superhero figurines will be doing battle with Loki in a sort of alternate-reality situation where he’s not releasing aliens through a portal (like he was in the Avengers movie), but massive amounts of ice, instead. Where’s Spider-man when you need him? 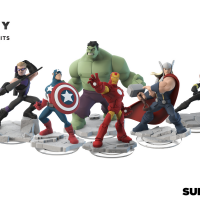 At the head of this article as well as immediately above you’ll see an image of the Avengers in Disney Infinity form up close. Tap the thumbnail image to get a far more detailed vision of these next-generation figures.