Audi puts self-driving A7 on road in highway testing

Audi dispatched its latest self-driving car prototype down the highways of Florida, previewing the autonomous technologies the German firm believes it will commercialize within the next five years. The test saw a heavily customized Audi A7 drive itself down Tampa’s Selmon Expressway, at one point putting the governor responsible for making the route an automated driving and connected car test bed in the driving seat, albeit with his hands off the wheel.

The car takes advantage of a Florida law passed back in 2012, which allows self-driving tests to take place in the state. The expressway was closed for the duration of the trial, which saw the A7 complete a number of tests including how well it handled an unexpected vehicle pulling in front of it.

As you’d expect, the sensor-laden car spotted the other traffic – all choreographed by Audi – and adjusted its speed to suit. Each test was punctuated with a rest while the car was halted and the systems reset, and although the final version of the technology, which Audi calls Traffic Jam Pilot, will operate at speeds up to 40 mph, on this occasion it was only run at up to 25 mph. 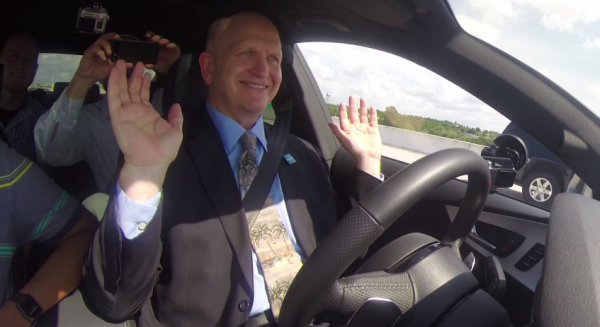 Still, it’s enough for Audi to describe the whole thing as a success, and renew its prediction that Traffic Jam Pilot will be offered on its cars within the next five years. Still, it’s trying to temper expectations: unlike Google’s self-driving “pod” cars which will begin their own trials imminently, Audi says drivers will still need to be alert and ready to take over, particularly as low-speed traffic jams give way to regular highway speeds.

Powering the autonomous A7 prototype is NVIDIA’s Tegra K1 chipset, doing real-time processing of feeds from multiple sensors and cameras as the vehicle tries to spot other traffic, pedestrians, and potential hazards.