After we’ve heard from several carriers about pre-orders with the Samsung GALAXY S 4, including AT&T and US Cellular, the HTC One has been rather mum about when it’s going to make its appearance. However, it’s been said that AT&T will open up pre-orders for the new device on April 4, with the entry-level 32GB model costing $250 after signing a two-year contract.

According to Engadget, who received an anonymous tip on the leak, reports that AT&T is planning to open up pre-orders at the end of the week, with Thursday being the big day for online pre-orders, while in-store pre-orders start the day after. It seems users will be able to grab the 32GB version in either white or black for $250 after signing a new two-year contract, which is the same price as the GALAXY S 4. 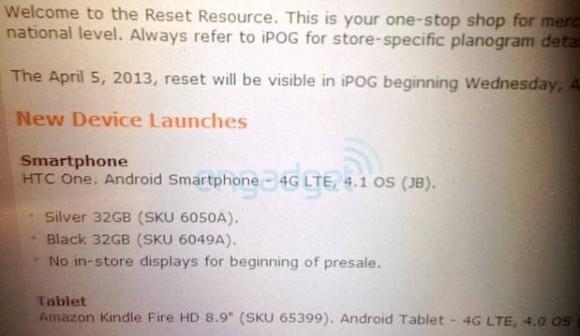 Of course, AT&T will also be carrying a 64GB variant of the new device, and they’ll be the only carrier doing so. Customers will be able to get a 64GB version for $300, although it appears that it won’t be available right away for pre-orders. According to a leaked screenshot, HTC One display units won’t be available during the pre-order period either.

April 4 is only a few days away, so we should be hearing from AT&T in no time as far what the official word is with HTC One pre-orders. However, like the pre-orders with the GALAXY S 4, we don’t expect a release date just yet. We should also be hearing official word from other carriers as well, if they plan on opening up pre-orders around the same time as AT&T.