AT&T has faced a lot of criticism over its restriction for using Apple’s FaceTime over cellular, and after months of the carrier saying that it would finally allow FaceTime over a data connection, users are now being able to video chat with friends and family over cellular using FaceTime.

According to AppleInsider, several users in multiple states have confirmed that FaceTime over AT&T’s LTE and HSPA+ networks is working, even with users who have grandfathered unlimited data plans. It’s also said that video and voice quality is on par with WiFi performance, suggesting that AT&T isn’t throttling FaceTime either.

FaceTime over cellular was announced with iOS 6 last year, but AT&T put limited access on the feature, only allowing Mobile Share plan subscribers and LTE device owners with a tiered plan to use FaceTime over their data connection. They eventually expanded availability only slightly, but now they’re opening up the gates to all of their users it seems, although no confirmations about FaceTime over 3G on AT&T have been spotted. 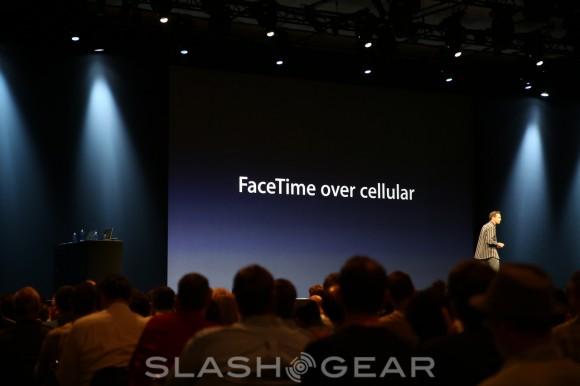 On a similar note, we discovered last month that Google+ Hangouts didn’t work over AT&T’s network either, suggesting that AT&T isn’t too fond of video chat apps in general, although it looks like they’re slowly coming around to it. However, the carrier claims that customers can use any video chat app over cellular, and that it’s up to the OS and phone maker to enable such features, but it seems they’re still restricting access to those on Mobile Share, tiered, and “soon” unlimited plan customers who have LTE devices.

We’ve reached out to AT&T to get some clarification on the FaceTime cellular rollout — specifically if 3G is also in the mix, and if Google+ Hangouts will eventually get its moment as well). We’ll update this post as soon as we hear back.

UPDATE: AT&T is currently offering the same statement as was released in May, as follows:

“For video chat apps that come pre-loaded on devices, we currently give all OS and device makers the ability for those apps to work over cellular for our customers who are on Mobile Share or Tiered plans. Apple, Samsung and BlackBerry have chosen to enable this for their pre-loaded video chat apps. And by mid-June, we’ll have enabled those apps over cellular for our unlimited plan customers who have LTE devices from those three manufacturers.

Throughout the second half of this year, we plan to enable pre-loaded video chat apps over cellular for all our customers, regardless of data plan or device; that work is expected to be complete by year end. Today, all of our customers can use any mobile video chat app that they download from the Internet, such as Skype.” – AT&T