ASUS was gleefully teasing something special for its flagship CES 2015 smartphone, and sure enough it is, with the ASUS ZenFone Zoom squeezing in a 3x optical zoom. The new Android handset has a 5.5-inch Full HD display and runs the latest version, 5.0 Lollipop, but it’s the backside which we’re most intrigued by, with its 13-megapixel camera and laser auto-focus system. The latter we’ve seen on handsets from LG, such as the G3 and today’s G Flex 2, but an optical zoom in a smartphone is altogether more unusual.

Tipped by ASUS to be the slimmest smartphone to pack such lossless zooming potential, the ZenFone Zoom also includes optical image stabilization. A macro mode supports close-ups from as little as 5cm away.

Meanwhile, although the handset can be left to its own devices, more keen shutterbugs can switch into a manual mode. That grants access to things like white balance and shutter speed, along with ISO settings and exposure.

At its heart is a 10-element lens, wrapped up in an aluminum casing; you also get a dual LED flash. It’s a handsome design, albeit fairly low-key, and some ways away from the bright colors of Nokia’s zooming PureView line-up. 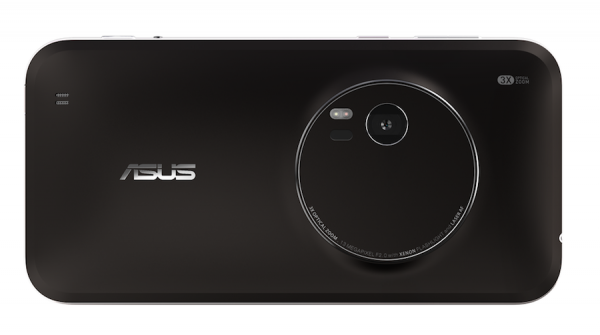 As for the rest of the device, on top of Lollipop there’s ASUS’ own ZenUI. That includes touch gestures, so that you can launch apps by swiping out a letter or symbol with your fingertip.

ASUS says the ZenFone Zoom will go on sale in the US sometime in Q2. It’ll be priced at $399.