ASUS Transformer Prime vs iPad 2, side by side gaming

One of the most surprising aspects of our hands-on series with the ASUS Transformer Prime thus far has been the single benchmark in which the iPad 2 did better graphically than this quad-core powerhouse, as seen in our first comparison between the two – but check out a couple of videos that should very well convince you that there’s no perfect clarity in a set of benchmarks performed on machines with two very different sets of innards. What we’ve got here is the Prime and the iPad 2 running two games side-by side at the same time: first Riptide GP, then Shadowgun, both games that show the real power of dual-core and up gaming – behold the smoothness!

The first example you’re looking at here is a game by the name of Riptide GP, a jetski racing game whose developers have been working closely with the NVIDIA team to optimize both the gameplay and the graphics within. What you’re seeing here is the most updated version of the game for the iPad 2 and its dual-core A5 chip on the left, and on the right the most advanced version of the game made for Android tablets and the Tegra 3 quad-core processor from NVIDIA. So that’s the iPad 2 on the left, Transformer Prime on the right, and ever so slightly different versions of the game due to the help NVIDIA has given the developers at Vector Unit (the folks who make the game.)

You’ll notice an abundance of graphic advancements on the Android version of this game because the Tegra 3 processor in the Prime allows them all to happen without any slowdown in the game. While the iPad 2 version plays perfectly well if you’ve never seen the other version of the game, it’s hard to go back and feel like you’ve got the real full experience once you’ve gotten it. The jetski jams into hyperdrive visuals at a boost, water spray and wave graphic intensity increases, and water splashes on your display when you dunk in after a long jump. 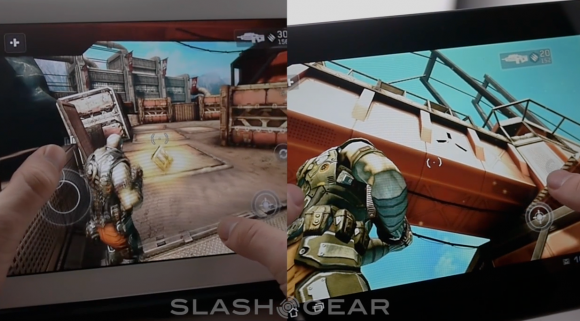 Next there’s Shadowgun, a game that only a few weeks ago was released for Android, now out for both platforms, and not just for dual-core processors. You’ll want at LEAST something so powerful to play it though, mind you, if you want to get anywhere without jumps, skips, or lag. What you’ll see here is absolutely none of that, and once again as it was with the Riptide game, NVIDIA has worked with the developer team that made the game, Madfinger Games in this case, to make it as awesome as it could possibly be here on this platform.

You’ll see all the cores put to the test on both devices, and neither one stutters a bit, but notice the Prime hit the water and you’ll find that there’s a whole extra layer of graphic excellence going on here and the Tegra 3 is no worse for wear. Like the Riptide game, I should let you know, this is a developers copy of the game too, so it might not look as nice as it will when the game is out for the Android Market as well. So look forward to that ladies and gentlemen!

Also note that this is just one in a series of hands-on reviews and demonstrations of what we’re dealing with here with the first quad-core processor toting Android device on the market in the ASUS Transformer Prime. Be sure especially to check our our full review of the Prime and stay tuned to SlashGear as we continue through the release and beyond!