ASUS have apparently reconfirmed their plans to launch the Eee Keyboard by the end of June 2009, with an official launch taking place at Computex next month.  The ASUS Eee Keyboard packs an Intel Atom-based nettop PC into a keyboard chassis, pairing it with a 5-inch touchscreen, for lounge use; back in March the company first revealed they were planning a June launch with a $400 price tag.

The Eee Keyboard uses a 1.6GHz Intel Atom processor, potentially the Z520, paired with 1GB of RAM and either 16GB or 32GB of SSD storage.  Two versions are expected to launch, both with WiFi b/g/n and Bluetooth 2.0, but one also having Wireless HDMI in addition to wired HDMI.

There’s a video demo of the touchscreen – which can be used to control media, load up a calculator, start macro shortcuts or browse photos – in action here, and more hands-on photos here and here.  ASUS have managed to develop something new in the netbook market (though computers in keyboards aren’t new, of course), so we’re eager to get our hands on it. 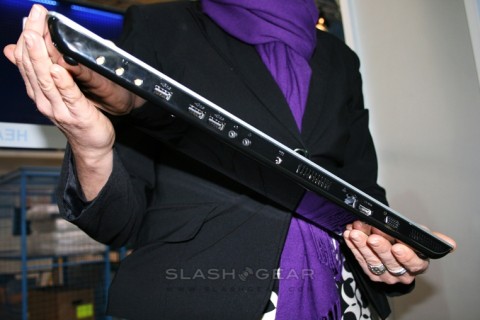