The arrival of Pine Trail looks to have re-energized ASUS into their old, netbook churning ways, with another 10.1-inch machine using the Atom N450 processor.  Available for preorder from Amazon Germany, the ASUS Eee PC 1001P keeps the Seashell styling of its predecessors, and aside from the CPU change things are pretty much on a par with last-gen netbooks.

That means you get a 160GB hard-drive, 1GB of RAM and Windows XP, with the whole thing weighing 1.1kg and measuring in at 225 x 165 x 21 mm.  The battery is a slim-fitting 4,400mAh pack which ASUS reckon you’ll see up to 11hrs of runtime from.  Connectivity includes WiFi b/g, three USB 2.0 ports and a memory card reader, along with audio in/out.

Curiously, the product description lists TV out/in as features, but the photos available of the 1001P don’t appear to show anything along those lines.  Amazon Germany say the Eee PC 1001P will begin shipping on January 6th 2010, priced at €267.70 ($384) and available in both black and white. 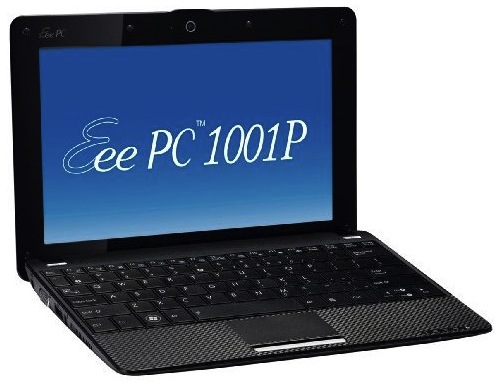