Aston Martin has a new hypercar to tease us with, with the AM-RB 003 following in the mid-engined tire tracks of the Valkyrie and Valkyrie AMR Pro. Revealed at the Geneva Motor Show 2019, the third in the series borrows Valkyrie tech – which itself leaned heavily on the automaker’s F1 experience – though makes it more practical and more road-suited than its predecessors.

More practical, maybe, but hardly less striking to look at. Aston Martin argues that it’s a “distillation” of the Valkyrie’s show-stopping style, rather than that car diluted, and certainly the family resemblance comes through loud and clear. 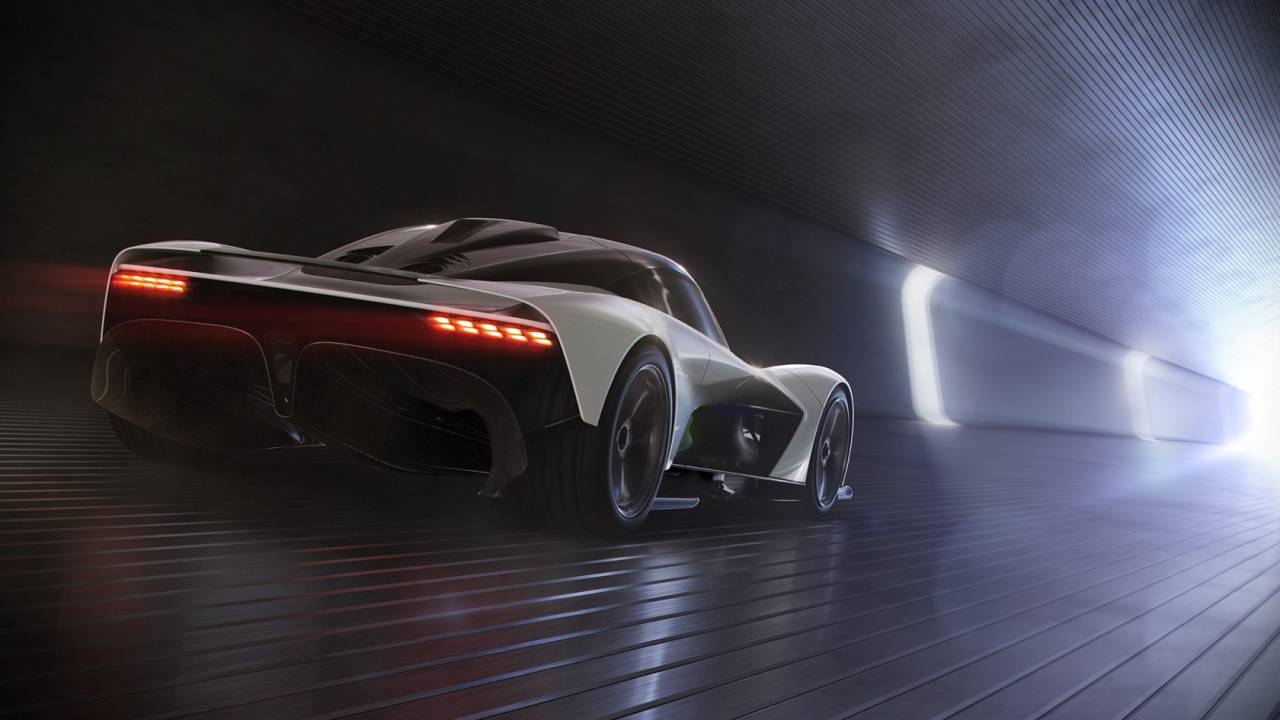 A design for the track, brought to the road

A sizable front keel is balanced by the equally large rear diffuser, and though the silhouette may be similar to the Valkyrie – a matter of aerodynamic needs defining form, the automaker points out – the detailing is different. That car’s super-lightweight lamps make a reappearance, all four of AM-RB 003’s lights, together, tipping the scales at less than a single DB11 headlamp. However AM-RB 003 gives them a different lamp graphic.

Most dramatic, though, is the variable airfoil that spans the rear wing. Dubbed FlexFoil, it’s the handiwork of FlexSys: downforce can be adjusted without the whole wing’s angle being changed, improving on efficiency in the process and cutting down on wind noise. 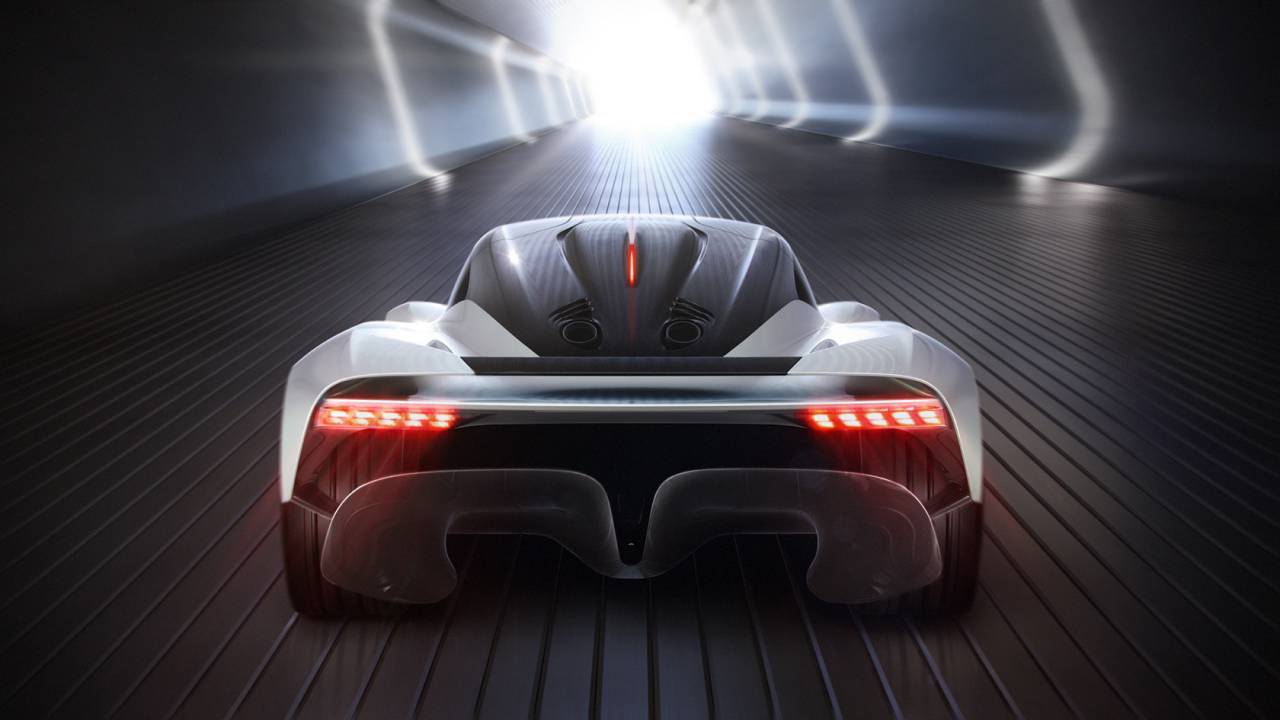 What we see on the AM-RB 003 show-car, Aston Martin says, is only the start of it, too. The final production design should have larger leading and trailing edge deflections, improving the system’s efficacy. It will also make its changes much faster, so that the FlexFoil wing can adjust in real-time to changes in the hypercar’s dynamic state.

Aston Martin is playing details of the engine AM-RB 003 will use close to its chest. However, we know it will be the first in the automaker’s range to use an all-new turbocharged V6 hybrid. That drivetrain will also mark the return to in-house designed engines.

It’ll be paired with the Nexcel sealed oil system that was first used in the Aston Matin Vulcan. Indeed, it’ll be the first time the system – which allows oil changes to be performed in less than 90 seconds – will be implemented in a road car. 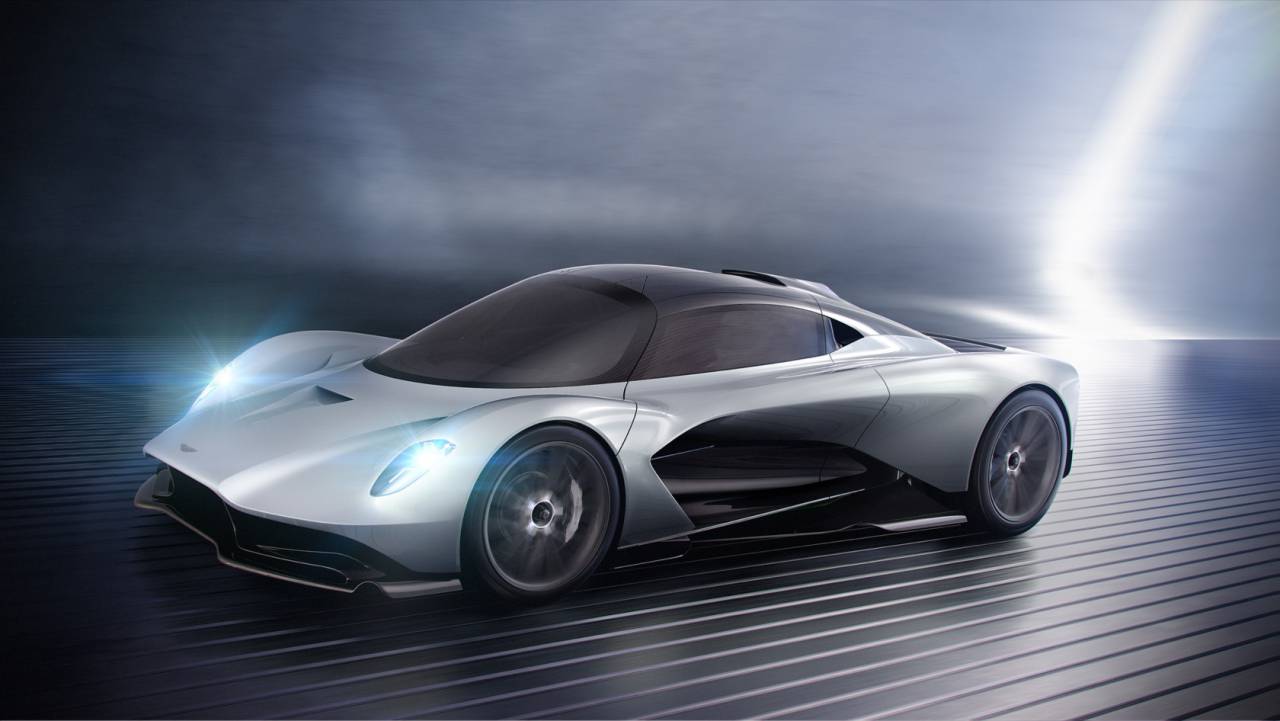 Then there’s the suspension and chassis. They, too, will borrow Valkyrie tech, with an active suspension system that promises to hit the right notes on both the track and the road. AM-RB 003 will use a carbon fiber structure, and the bodywork will be carbon fiber too.

With the Valkyrie promising ridiculous levels of performance, you might be wondering why anybody would want an Aston Martin AM-RB 003. The reality, though, is that while the Valkyrie may be road-legal, the experience probably won’t be the most comfortable. That’s something Aston Martin has taken into account for this new mid-engined car. 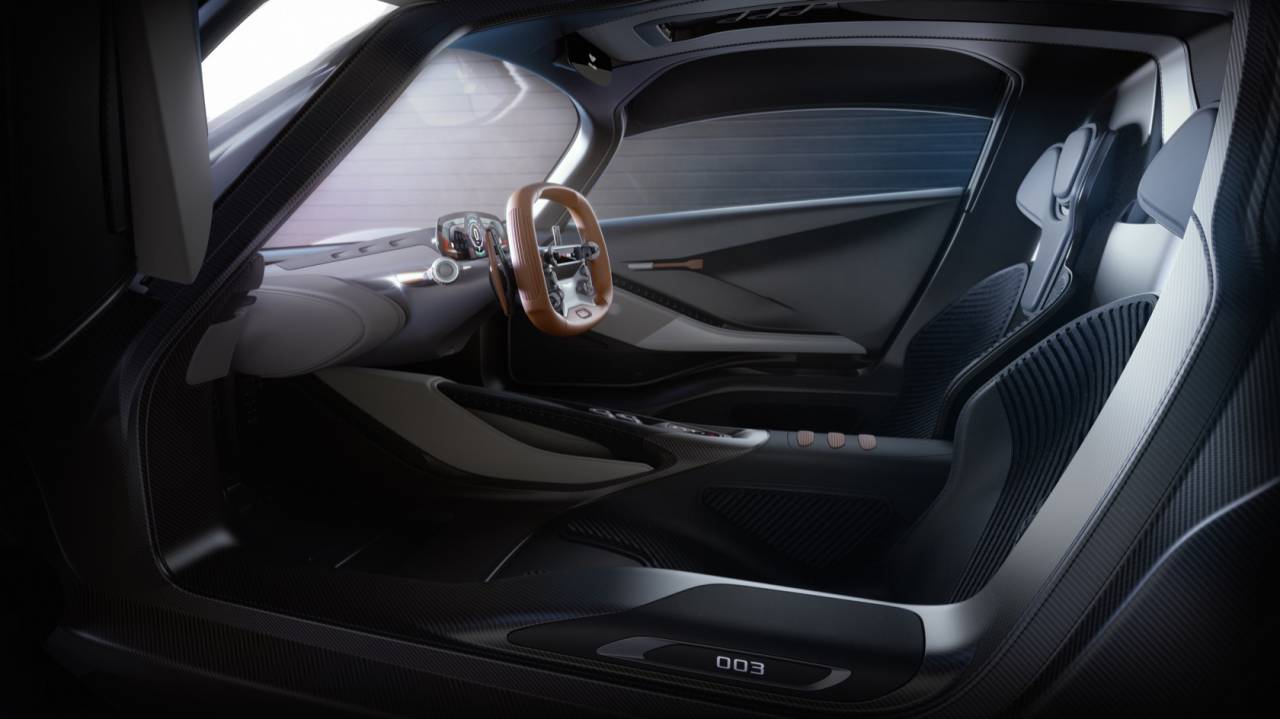 So, the cockpit is larger, and easier to access. The doors borrow from LMP-1, opening onwards and taking a cut-out from the roof with them. Once inside, the center console is broader and there’s a “terrace” behind the seats for luggage. Aston Martin is even providing nooks for smaller items, like your phone or sunglasses.

They’re not allowed to impede on driver positioning, mind. Aston Martin is calling that “Apex Ergonomics,” and it’s basically the alignment of the driver’s back, the steering wheel, and the pedals. The rest of the cabin is pared back so as to be less distracting: there’s just a small display mounted on the steering column – with a cut-out in the wheel so that it doesn’t block the screen – for the essentials. 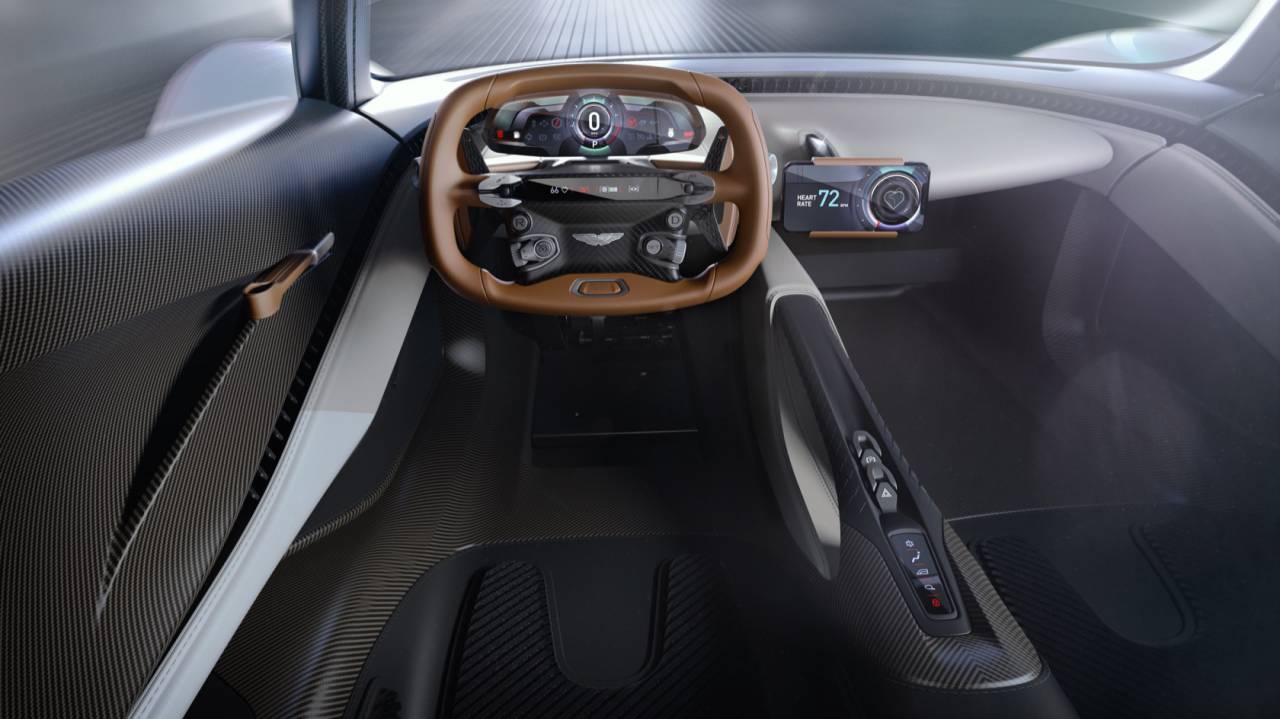 The infotainment system relies on the driver’s smartphone, meanwhile, with a cradle to support it. 3D printing is used for the center console – reducing 50-percent of the mass in the process – with integrated switchgear. A wraparound band between the upper and lower halves of the cabin is punctuated with the controls for the audio, HVAC, and lighting, with recessed vertical gills for vents.

A car to look forward to

Aston Martin is arguably getting a little ahead of itself. The automaker has only just publicly finalized the Valkyrie’s powertrain, and the first prototypes of the car are only now in the build phase. Track testing happens after that, before customer cars – all of which have already been sold – start to be made. 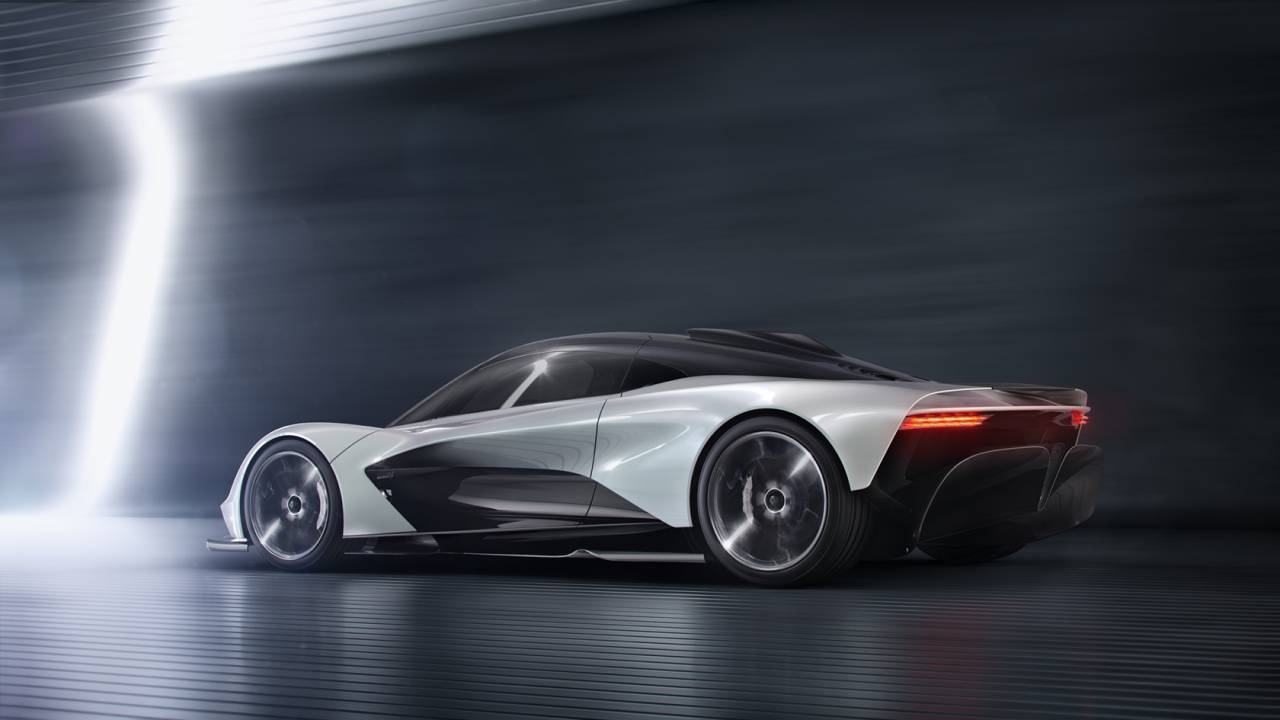 As for the Aston Martin AM-RB 003 – until now known by its Project 003 codename – production is further out on the calendar: the company says it plans to begin making the new hypercars at the end of 2021. Pricing and performance are yet to be announced, and we don’t know just how many of the cars will be on offer.