The USA Department of Defense has witnessed the first successful public test of the Army’s latest in futuristic vehicles – the hoverbike. This device is officially known as the Joint Tactical Aerial Resupply Vehicle (JTARV), and can be seen tested without a pilot in a video shared by the United States Army Research Laboratory this week. The video shows a small-scale prototype test flight, and may move on to flights with pilots in the near future.

Unfortunate for those Star Wars fans on Twitter hoping to see this hoverbike outfitted with Speeder Bike fatigues, this one might not have a pilot at all. In fact, in the video presented by the Army here, officials do not discuss the device in a sense strictly aimed at human riders. This could end up just being another drone.

The JTARV could instead just become a carrier of supplies, but we’re with Popular Mechanics in saying that it’d be crazy NOT to try to develop this machine for a rider. Think of a drone, able to remotely fly in and out of situations, with or without a rider to steer it. That’d present a major tactical advantage over flightless enemies – more than traditional means, anyway.

You may also remember the tests shown by Malloy Aeronautics of a “hoverbike” back in June of 2015. There the crew seemed to have a hoverbike device ready to roll in a very basic sense. You’ll notice how exceedingly familiar this flying device is to the Army’s version above.

Above is the most recent video shared by the folks at Malloy Aeronautics. This video shows a hover device with the same name as the one shown above – development continues at least through July of 2016. Now we’ve only to cross our fingers for a version without exposed chopper blades that could easily hand us a few grave injuries. 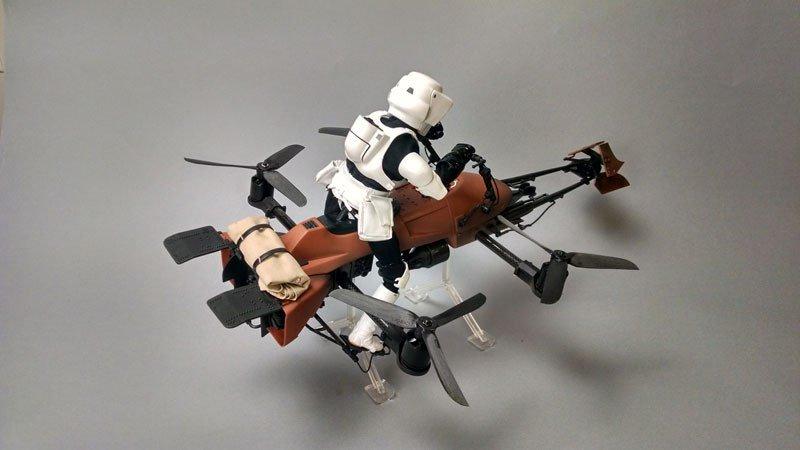