The Apple Watch ECG app has landed, and the good news is that while my British heart may be cold, it’s at least not showing signs of atrial fibrillation. Landing as a part of watchOS 5.1.2, the new heart health monitoring app was a key part of the Apple Watch Series 4 promise back when the latest-gen wearable was announced earlier in the year.

Health has become an increasingly important element of the Apple Watch message. With each generation, after all, the smartwatch has gained more accurate and comprehensive exercise tracking. Now, though, it’s making even more significant inroads into what would traditionally have demanded a visit to your doctor’s office.

The ECG, or electrocardiogram, app measures the electrical pulses that cause the heart to beat. By comparing those pulses in your wrist with those in your fingertip of the opposite hand, the Apple Watch can track them across the heart. That way, it can check to see if the upper and lower chambers of the heart are in or out of rhythm. 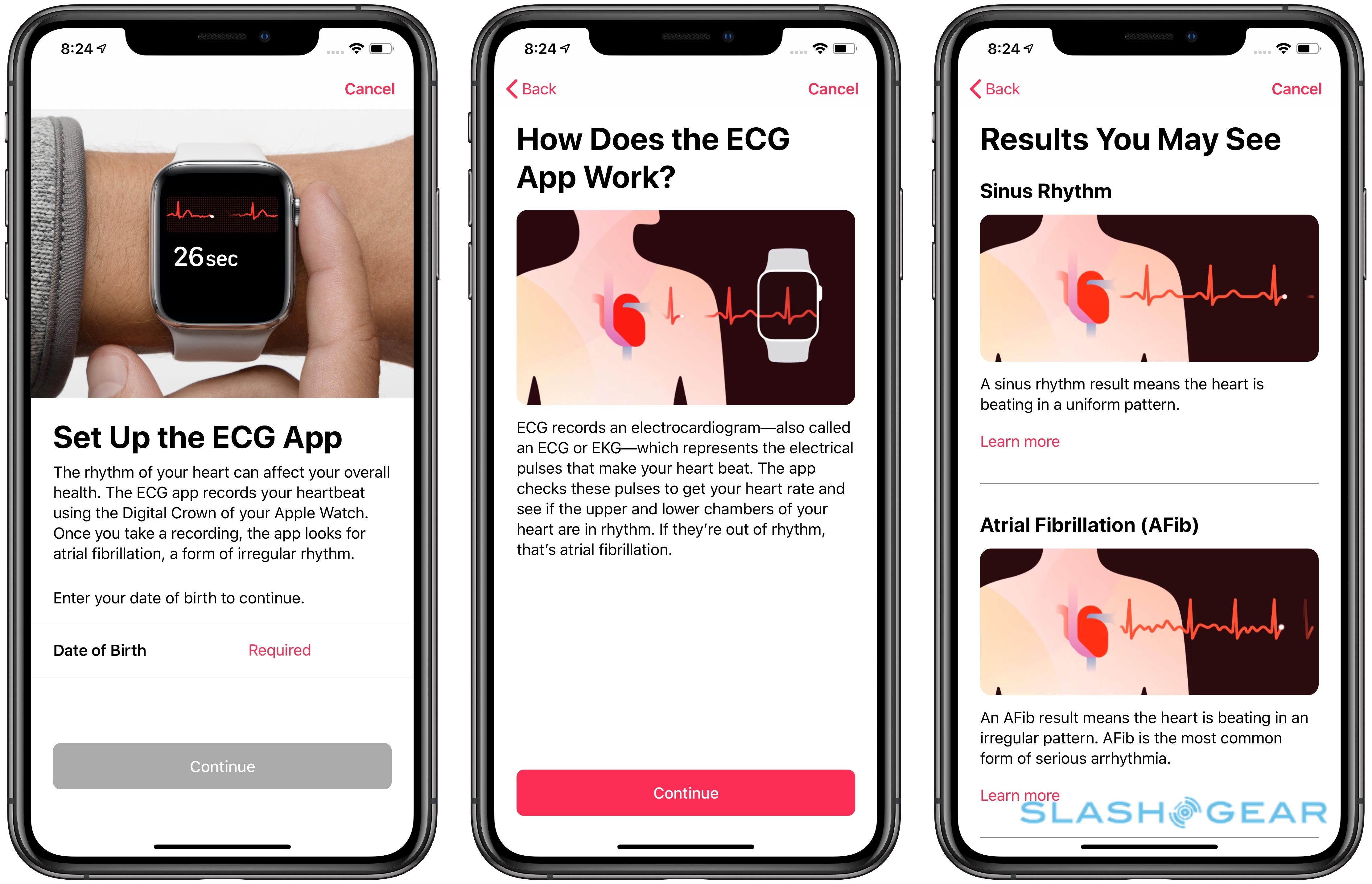 What you want to see is a result of sinus rhythm: that’s when the heart is beating correctly, in a uniform pattern. Atrial Fibrillation, or AFib, however, is an arrhythmia when the upper and lower chambers aren’t in correct sync. That could be a sign of heart health problems that need official medical assessment.

Setup is straightforward, though both your Apple Watch and your iPhone will need to be running the latest versions of watchOS and iOS respectively. That’s because, not only does the new ECG app have to be loaded to the wearable, but the Health app on your iPhone is also changed. It’s there were logs of all your ECG test results are kept, along with controls for sharing and more. 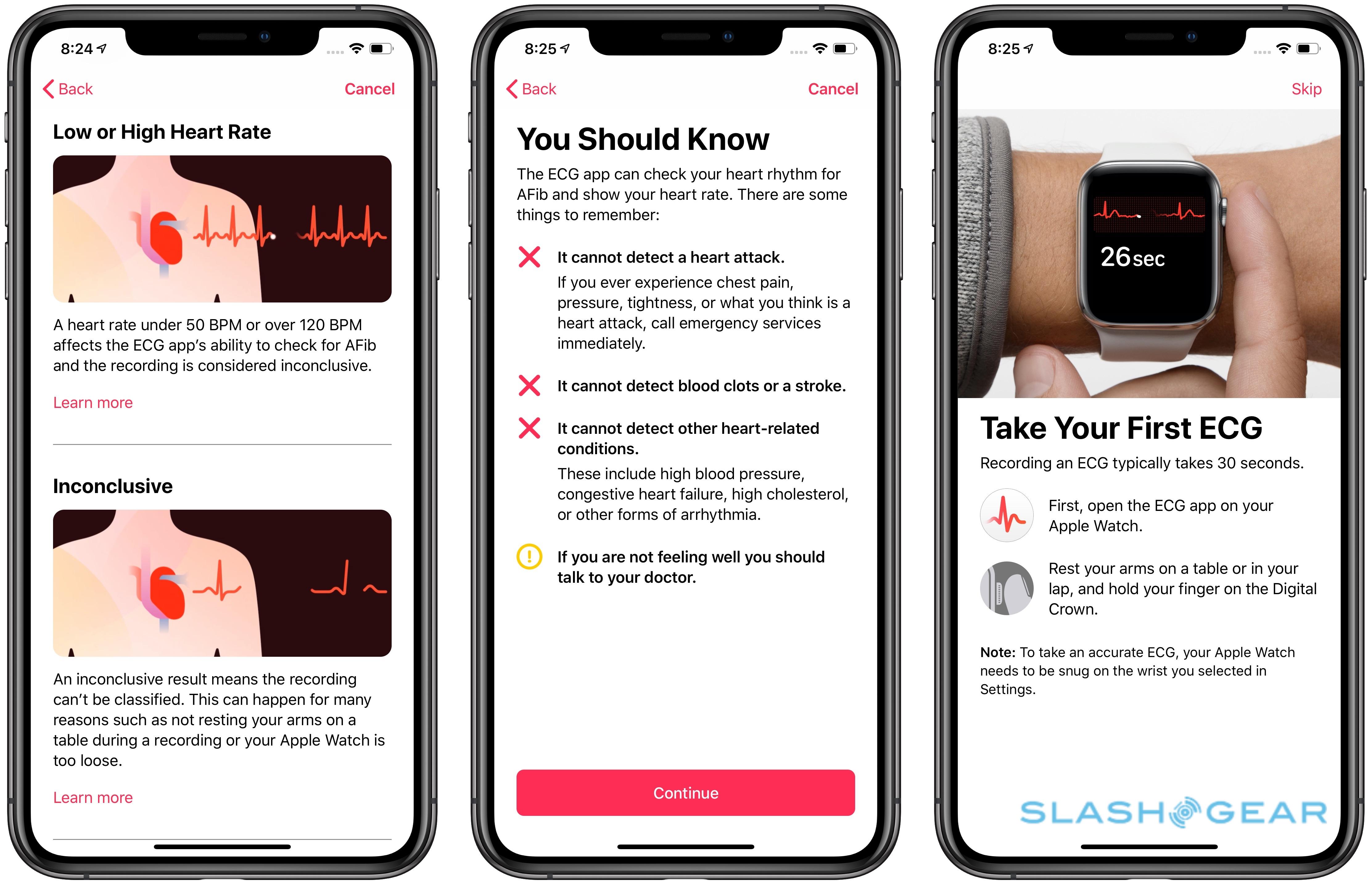 Actually using it is much quicker in comparison. You load the ECG app from the Apple Watch’s app picker, then – while sitting still and relaxed – press your forefinger against the Digital Crown. If you apply too much pressure and click it by mistake you’ll still go through with the test, but the app will warn you that you don’t need to push so hard. A graphic shows your current heart rate and how long you have left to wait. 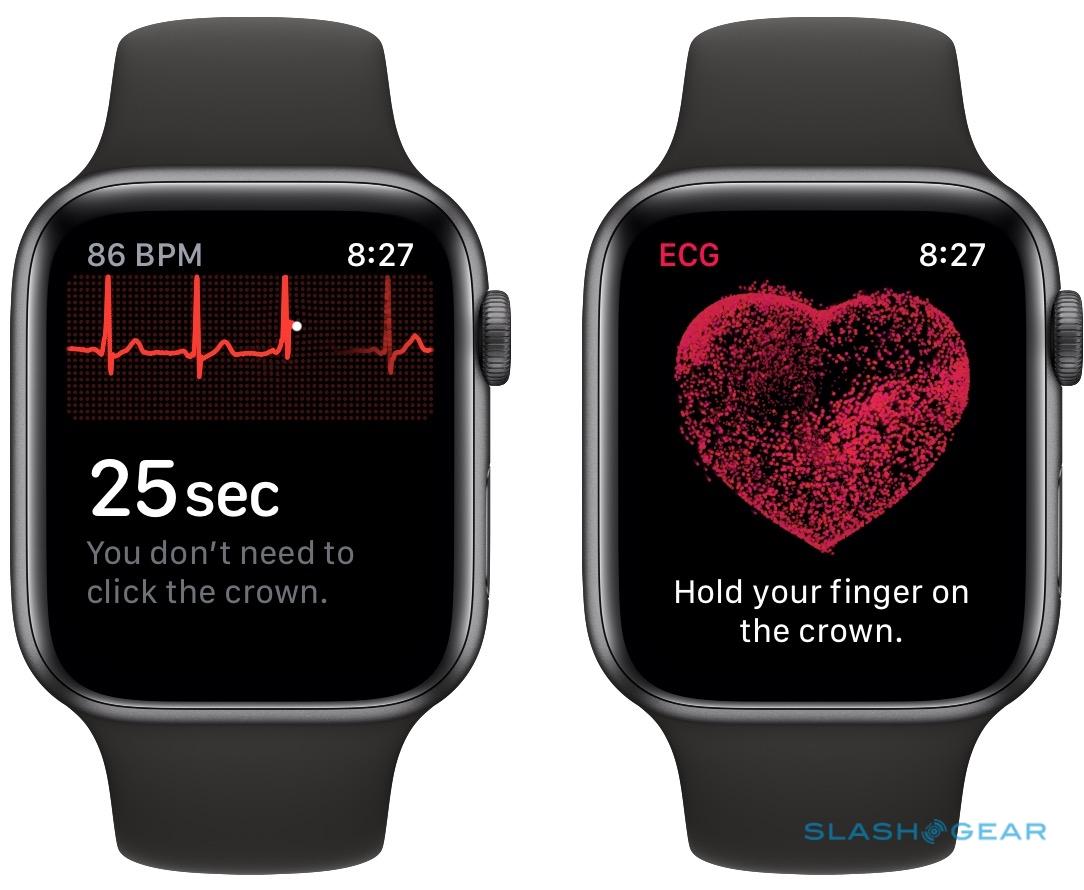 I have to admit, I felt a little nervous when I first loaded up the ECG app and followed the instructions. After all, there’s always the fear that you’re going to get some unexpected bad news from any sort of medical test. 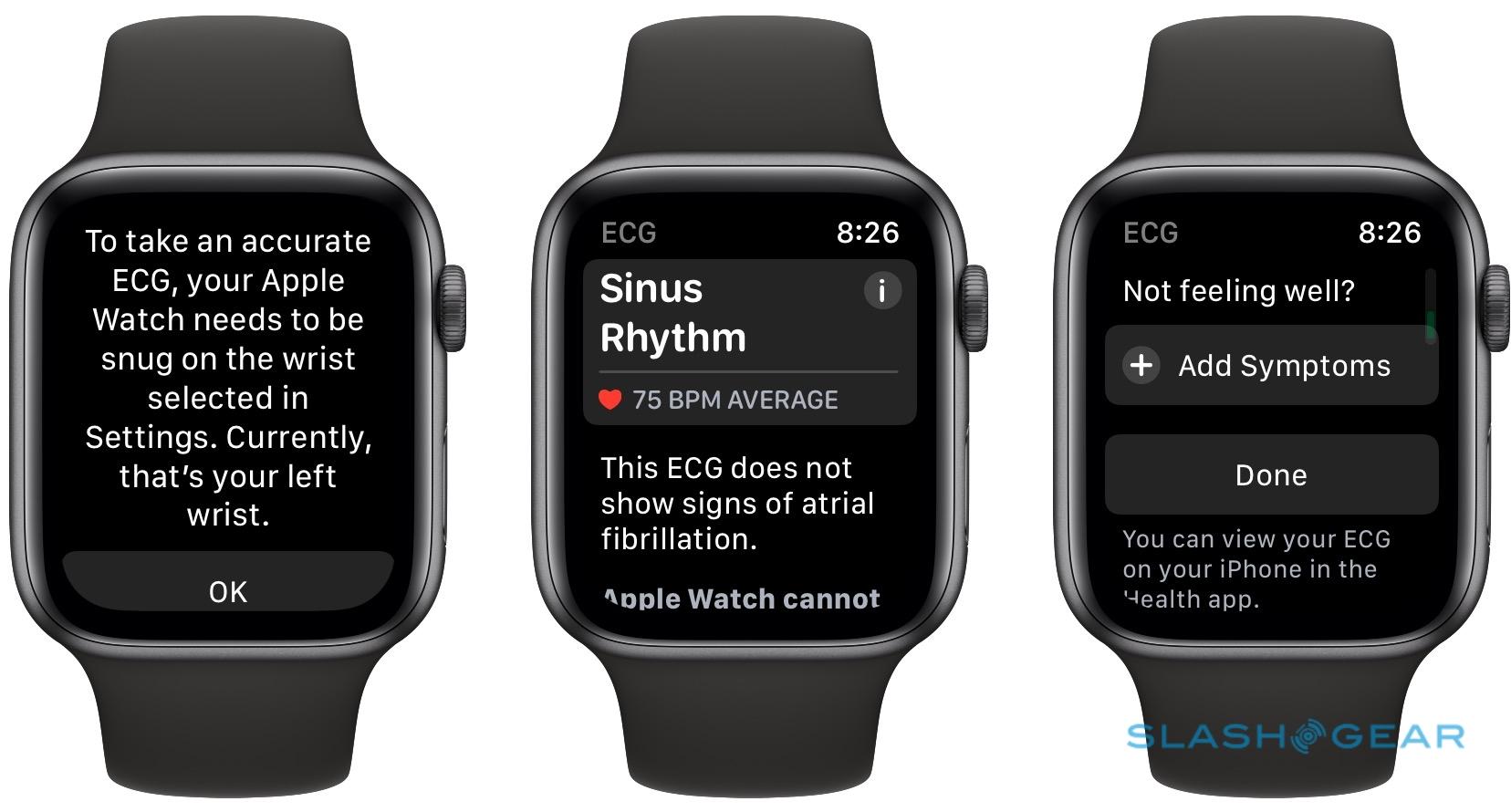 Happily, after thirty seconds the Apple Watch informed me that my ECG showed no signs of atrial fibrillation. That data was saved in the Health app on my iPhone: from there, you can also see more details from the test. In addition, you can set up what could be more useful in the long run, Irregular Rhythm Notifications. 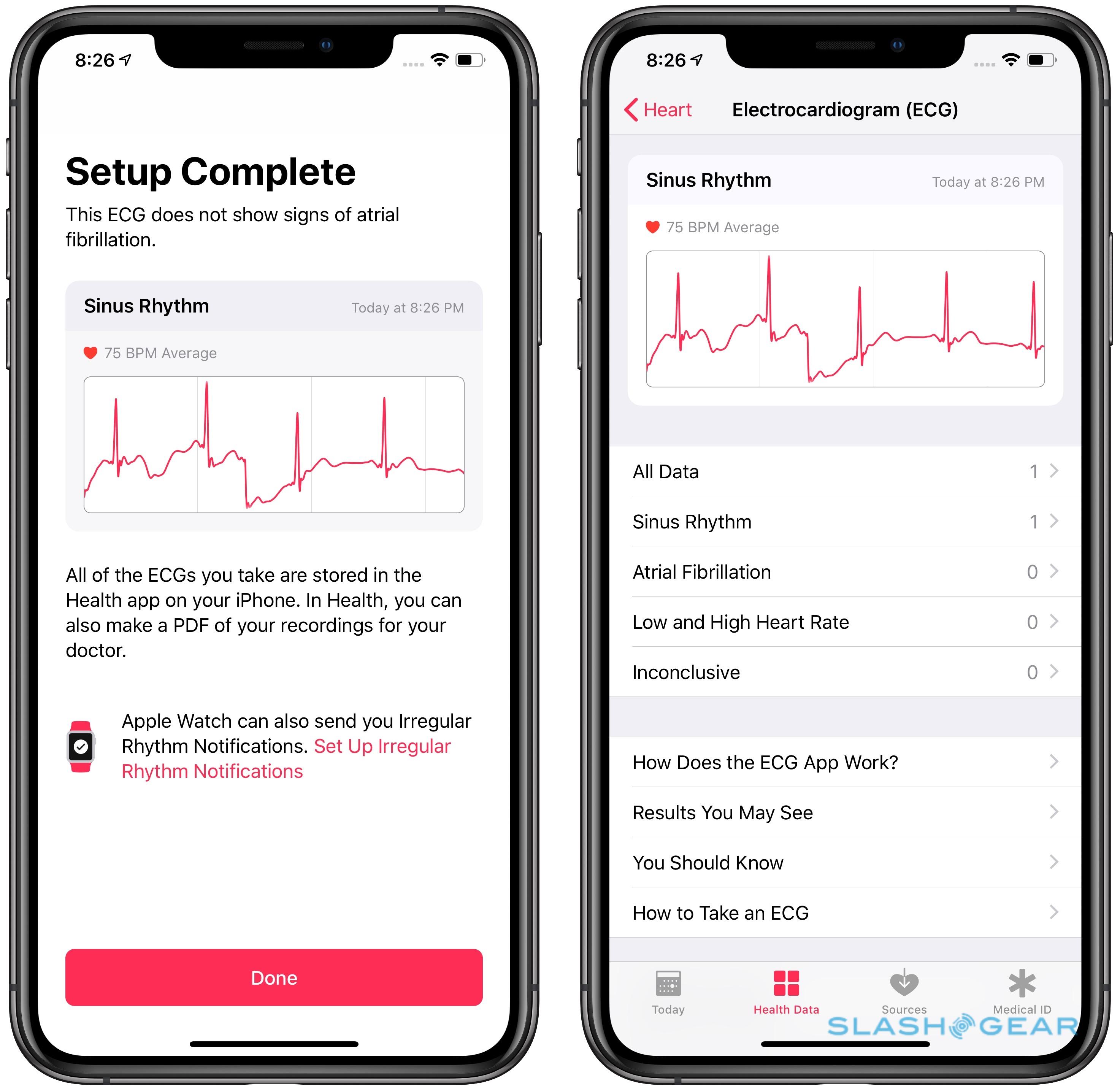 Much like the Apple Watch has been able to look out for unexpectedly high heart rates already – flagging if your pulse is racing, even if you’re not active – now it can also highlight potential irregular rhythms, too. You have to enable it independently from setting up a normal ECG test, including putting in your date of birth and gender again. 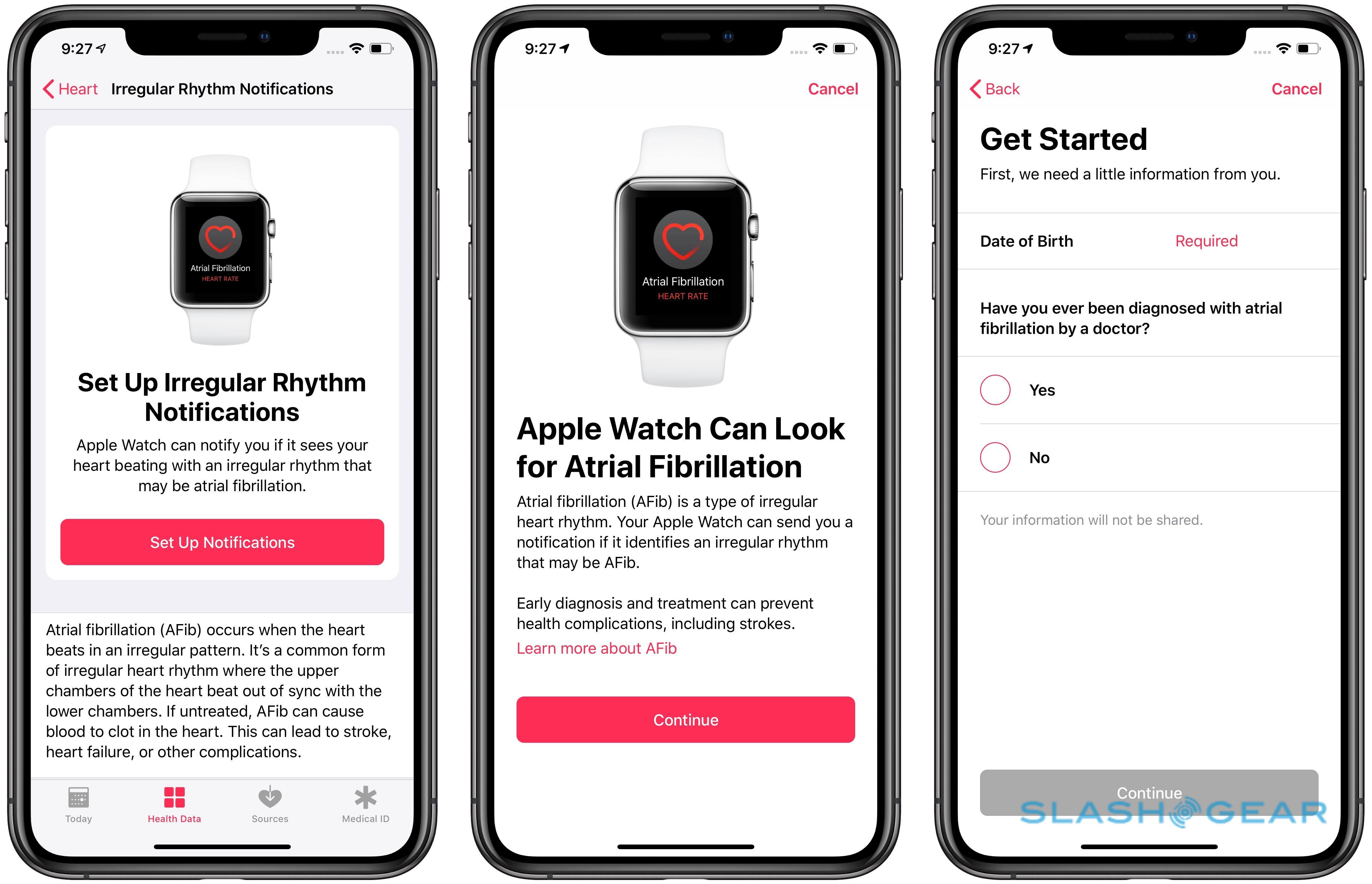 After that, the watch will periodically look at your heart beat to see if there’s an irregular rhythm occurring. That, Apple points out, could be an indicator of AFib. Exactly how frequently during the day those readings will be taken will vary: the Apple Watch typically takes them when you’re still, so if you’re particularly active you could see fewer results than someone sat at a desk all day.

Again, there’s a warning that none of this is infallible. Apple Watch still can’t detect heart attacks, and it’s not constantly checking for evidence of AFib, Apple points out. If you’re not feeling well, it’s worth getting checked out – even if the wearable hasn’t pinged you with a warning notification – too, and you should check with a doctor before changing any medication you’re testing. 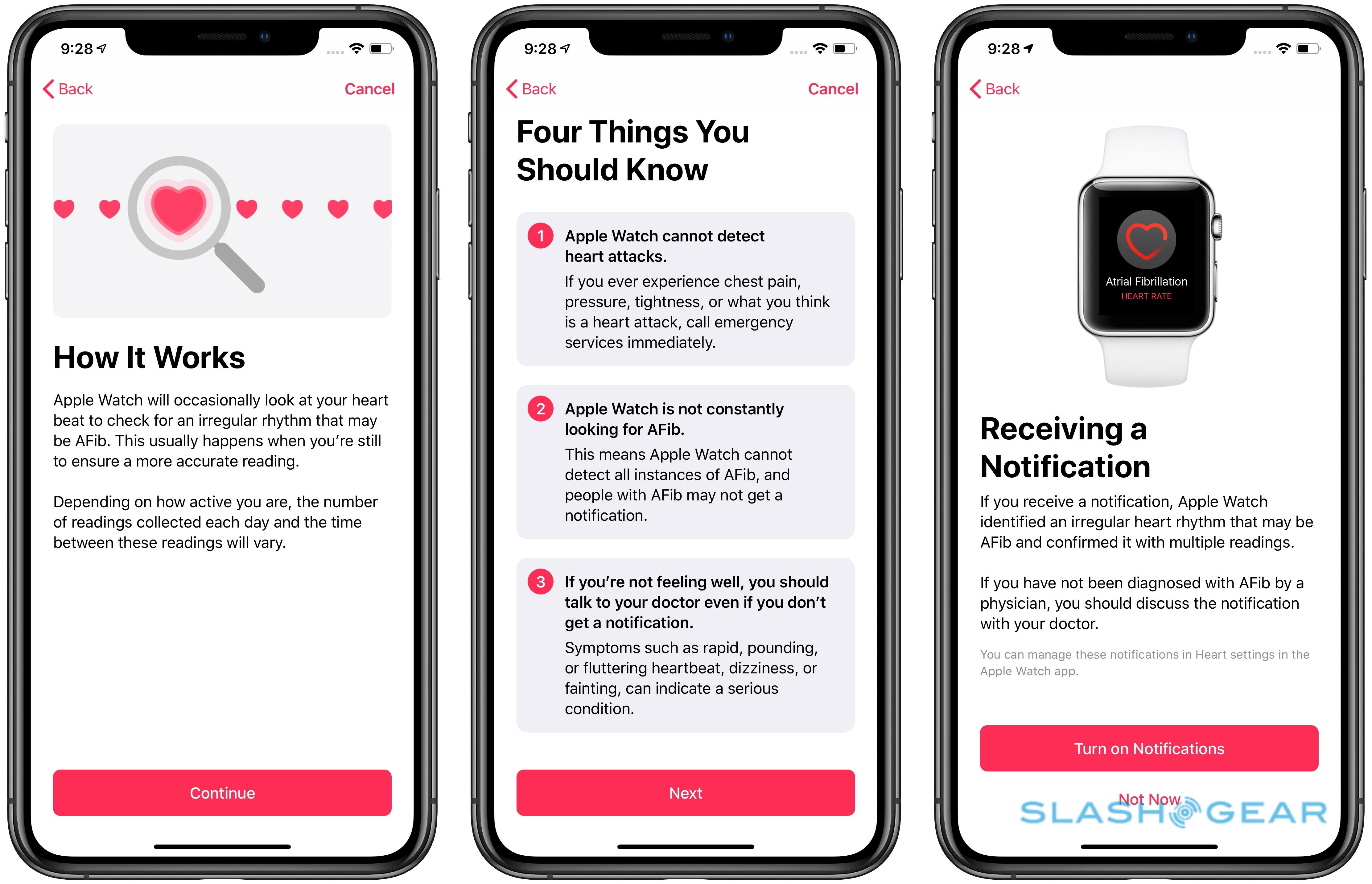 The irregular rhythm notifications won’t be pinged out the first time the Apple Watch spots signs. In fact, it will confirm it will multiple readings first, before alerting you to the possibility of a problem. And, as with the ECG, actually diagnosing what’s up is down to a proper doctor: this is an early-warning tool, and nothing more.

There’s certainly one school of argument that Apple could enable people with potential health issues into a greater sense of apathy: their Apple Watch tells them they’re fine, and so they ignore physical symptoms they might have. Still, for people like me – simultaneously both fairly paranoid about health, but also lazy about seeking out actual healthcare advice – there’s a strong argument that any extra insight has to be a good thing.

AFib might not be the only type of heart issue out there, but it’s certainly one of the most common, after all. Meanwhile, encouraging Apple Watch wearers even just to consider heart health more might encourage owners to be aware of what their bodies are telling them.