We knew this day would come, and we’re actually wondering why that day only arrived now. Apple has released guidelines that tell accessory makers exactly how it wants Apple Watch bands to be made. In Apple’s carefully guarded and curated world, this isn’t exactly a surprise, though the lucrative market of third-party unofficial accessories remain, well, lucrative. But it remains to be seen if that will also be the case with the Apple Watch, which Apple is keeping a close eye on, from charging accessories and now to the most personalized part of the devide: the strap.

Apple, of course, would prefer you to buy official straps from its store, even though they could cost a few hundred bucks, depending on the band type as well as the Apple Watch model. But it also knows there will be no stopping accessory makers from getting into the hype as well, so it might as well set down the ground rules for designing Apple Watch bands that it can certify as “Approved by Apple”.

In line with its “Made For iPhone/iPad” program or MFi, Apple is launching a “Made for Apple Watch” counterpart (MFAW?). As part of that program, it has released the guidelines for making straps themselves, as well as the AutoCAD DXF file for the lugs, the little connectors that bridge the strap and the Apple Watch body. Apple promises that actual lugs will be available soon under that MFAW program. 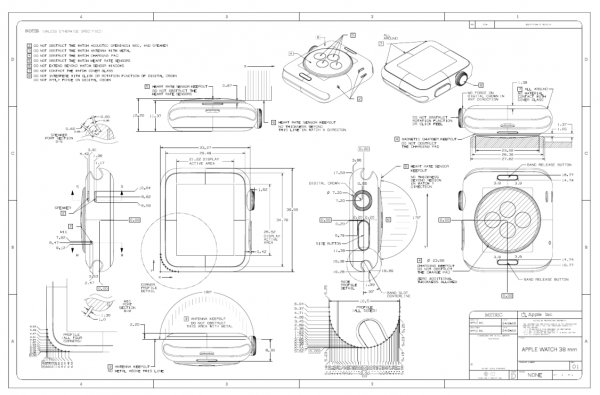 Equally interesting is the fact that Apple’s guidelines remain silent on the question of the diagnostic port obscured by the band. The company has so far been mum on the true purpose of the port. Other more enterprising accessory makers, like Reserve Strap, however, are planning to utilize it for direct wired and therefore faster charging of the Apple Watch.

Apple’s silence on the matter is probably leaving accessory makers on the fence. On the one hand, if the functionality is actually already there, they might as well take advantage of it. But on the other hand, if Apple suddenly announces that it is an unsupported and even disallowed, it could very well waste the manufacturer’s time and resources. Apple has similarly not released guidelines for charging accessories, though many, like Griffin, have opted to simply build around the Apple Watch charger itself.