Apple patents could give next iPhones a superior camera

DxOMark has crowned the iPhone 6 and iPhone 6 Plus as the kinds of the smartphone camera hill, but it would be quite out of character for Apple if it were to rest on its laurels. Apple has advertised to no small extent the power that can be found in your pocket, especially when it comes to the camera but we’re still a long way from matching the capabilities of dedicated digital cameras. Apple, however, might have a solution, based on two patents that could give the next iPhone better image quality, improved OIS, and real zoom lenses.

Almost all smartphones include a single image sensor that filters out light into the three basic color components of red, green, and blue, in varying proportions (25% for red, 50% for green, and 25% for blue). The camera software then blends these together to form a single image. Given the reduction in information, the actual image is considerably of lower quality. This filtering is simply a compromise because of the smaller amount of available space you can cram a sensor into when it comes to smartphones versus digital cameras.

Apple’s solution is to employ a light filter cube and three sensors to fit inside that same thin iPhone body. Instead of filtering the light, the cube will split light into its three component colors, which are then redirected through each face of the cube, each to an image sensor designed specifically to handle that particular color. Again, camera software will composite the image from this but it will instead be working on 100% color information, which will result in overall better image quality. This alone is probably already impressive and ingenious, but Apple isn’t stopping there. In fact, this light splitting cube is only the 2nd part of Apple’s camera patent invention. 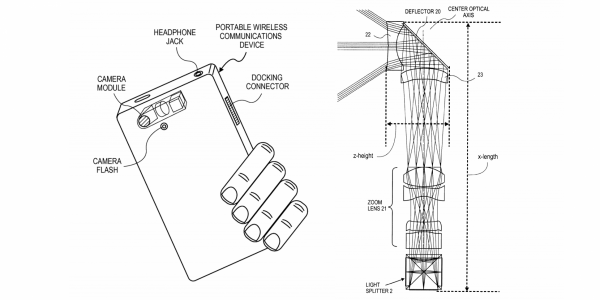 The other part has to do with zooming lenses and image stability. Again, most smartphones do not have any form of actual zooming, content with relying on digital zooming, because of the amount of space that would be needed to incorporate the parts inside a smartphone. Just look at how thick even the Samsung Galaxy K Zoom is, which was built just for the purpose of giving a smartphone some digital camera prowess. And in terms of OIS or optical image stabilization, the iPhone 6 Plus already has one, but Apple’s patent intends to improve on it by using a mirror that has actuators that move in opposition to the shaking movement when held in a hand.

As much as these ideas are noteworthy in themselves already, equally interesting is how Apple intends on fitting them all inside an iPhone. Apple is quite stubborn at keeping its iPhones at a certain size, even if it had finally conceded when it came to the size of the screen. In order to keep things still thin while fitting all those components, Apple’s patent is calling for a different camera component design, one that extends sideways across the width of the iPhone and shaped more like a periscope. It is, indeed, a creative way of solving one of the most difficult puzzles when it came to smartphone cameras. 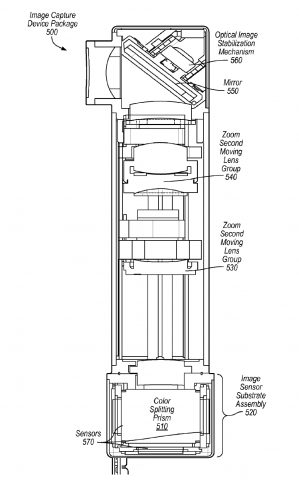 Now the question becomes whether Apple will implement this soon. As a patent, there is no assurance that it will ever see the light of day in an actual device. But given the ingenuity and benefits that these would bring, it’s hard not to see Apple trying to make it a reality in a future iPhone generation.