Apple Patent Seeks to do Away with Fingerprints

Take a look at the Fingerprint Portal here on SlashGear and you’ll see quite plainly that when we review devices, the subject comes up often, especially when it comes to displays. Apple knows this, and with their new FCC filed plans they appear to be seeking to do away with them. Apple here is using an oleophobic coating to keep fingerprints out of mobile world, a direct liquid application called Physical Vapor Deposition (PVD) and should it work the way they’re describing it AND should it make its way to the real world, we may soon have a tougher time judging who has held a phone based on prints alone.

This method is similar to, though a bit more advanced than, the situation that’s currently in use on the iPhone 3GS, iPhone 4, and the iPad and iPad 2. Should you use a heavily abrasive material to scratch marks into to screen, said coating will likely be removed – also the material could be worn off after prolonged use. This new method appears to be advanced beyond anything Apple has released at the moment. Cleanliness ho!

The oleophobic ingredient could be provided as part of a raw liquid material in one or more concentrations. To avoid adverse reactions due to exposure to air, heat, or humidity, the raw liquid material can be placed in a bottle purged with an inert gas during the manufacturing process.

This new method’s FCC filing took place just this past February and is just popping up in the public now, so more than likely we’re not seeing the process applied to devices just yet. Time for some iPhone 5 action? 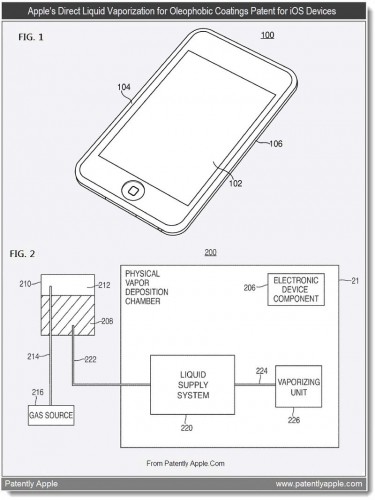