Barely was the e-ink dry on Microsoft and Barnes & Noble’s $300m NOOK agreement when pundits were questioning the wisdom of adding Amazon to the software company’s existing roster of big-name rivals. Microsoft is already under attack in mobile and computing, so the commentary went; throwing one of the biggest retailers around into the mixture was at best foolish and at worst evidence of Microsoft spreading itself thin when it needs to be extra lavish with its strokes. That analysis is wrong, though. Make no mistake: Apple, not Amazon, is in Microsoft’s sights today.

It’s an easy mistake to make. Barnes & Noble is a book retailer – one of the old guard – which found a (perhaps surprising) degree of success with its NOOK ereader line. Its natural rival is Amazon, another book retailer (albeit one that has blossomed into so much more), and a new upstart at that; sneeringly confident with its Kindle and its rocketing dominance of the ebook scene.

So, Microsoft buys into ebooks; it’s natural to assume that Amazon is its target. Safe, but wrong. Amazon isn’t a natural competitor for Microsoft. We’re not going to see the Windows maker suddenly decide to start offering vacuum cleaners, and coffee machines, and Nike shoes. In fact the only thing Microsoft could learn from Amazon is its ecosystem, Kindle hardware supporting Kindle ebook sales with a heaping of lock-in thanks to a proprietary platform.

It has a better example of that already.

Apple is eating Microsoft’s lunch in mobile, and it’s stealing its allowance too to spend on computing treats. Windows Phone has grown too old to fit into the “bold new upstart” category and is now being eyed warily as the not-quite-convincing challenger that’s yet to prove it can fight in its weight category. Microsoft’s position in tablets is laughable; PC sales are, despite the best efforts of Intel and its ultrabook investments, sluggish. And all the time, across the aisle, Apple is selling Macs, iPhones and iPads as fast as it can make them.

What Apple has – and what Microsoft has finally woken up to – is an ecosystem. iTunes, the App Store, iCloud; they all pull together and make owning several pieces of Apple kit not only pleasant but justifiable. They simply work together better than a mismatched bag of piecemeal hardware. It’s no surprise that the average Apple household, researchers have found, owns not one but 2.4 of the company’s devices.

Microsoft has so far struggled to convince when it comes to ecosystem. Zune suffered for its lateness to the dedicated PMP market and then the subsequent lateness of Windows Phone to the converged smartphone market. Xbox LIVE has made tentative inroads across phones and PCs, but we’re yet to see the compelling cross-platform gaming that Microsoft promised us would make Windows Phone the only choice for Xbox 360 owners.

The big push comes with Windows 8, Microsoft’s opportunity to show us how its currently disparate elements of computing and mobile can finally play nicely together. Adding ebooks – both reading and, via likely integration with Office, creating – to that ecosystem is a no-brainer, just as Apple added the iBookstore to its iTunes and App Store line-up. 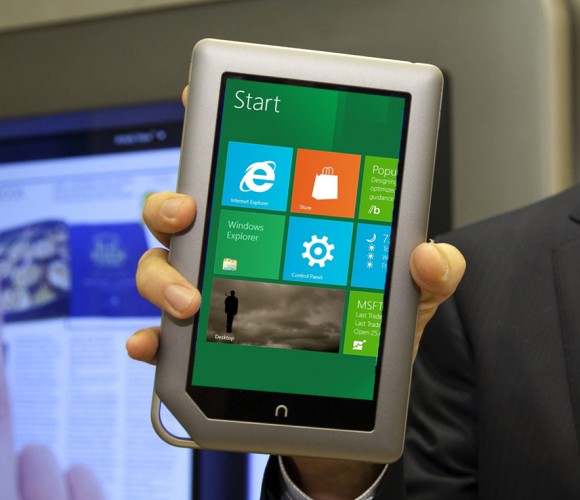 Will we see a NOOK tablet based on Windows RT? Quite probably, yes; it doesn’t take much to imagine Barnes & Noble pushing a larger ereader, sticking to the LCD touchscreen of the existing NOOK Tablet rather than e-paper, and running Microsoft’s finger-friendly OS on affordable ARM chipsets. Similarly, this is a digital partnership not just a hardware OEM deal to use Windows 8, so expect Metrofied NOOK apps for Windows Phone, Windows 8-based tablets and PCs, along with most likely SkyDrive integration for that all-important sync.

It also gives Microsoft a proposal to drape around a lower price point. Cheap Android tablets struggled to compete with the iPad because buyers came to them with broad expectations, dreams fueled by what Apple’s slate was promising. By reframing them as Android-based ereader-tablets, retailers like Barnes & Noble have rationalized those expectations: a solid ebook experience with garnish, if you like. That’s something Microsoft – and its other partners – can use to their advantage when it comes to making legitimate cases for $150-300 Windows RT models.

We won’t see all the hardware straight away. Windows 8 is fast approaching, after all, and it will take time for Microsoft and Barnes & Noble to get their product roadmap in motion. The new OS needs to launch with a NOOK tile sitting proudly front & center in Metro, however, and preferably one on Windows Phone at the same time. Microsoft has a chance to reignite its ecosystem strategy, but it’s coming late to the game again and it lacks the track-record to convince us success is inevitable.