According to a brand new update to Apple’s official developer portal, downtime occurring this past Thursday was due to an attempted intruder attack. While Apple suggests that “sensitive personal information” had no chance of being accessed, downtime occurred due to Apple itself taking the portal down to make certain of the extent of the attack, front to back.

The possibility of “developers’ names, mailing addresses, and/or email addresses” being accessed spurned Apple to take the entire portal out of commission until a full report could be made. Apple notes that they’re currently in the process of rebuilding their entire database and updating their server software.

“We’ll be back soon.

Last Thursday, an intruder attempted to secure personal information of our registered developers from our developer website. Sensitive personal information was encrypted and cannot be accessed, however, we have not been able to rule out the possibility that some developers’ names, mailing addresses, and/or email addresses may have been accessed. In the spirit of transparency, we want to inform you of the issue. We took the site down immediately on Thursday and have been working around the clock since then. 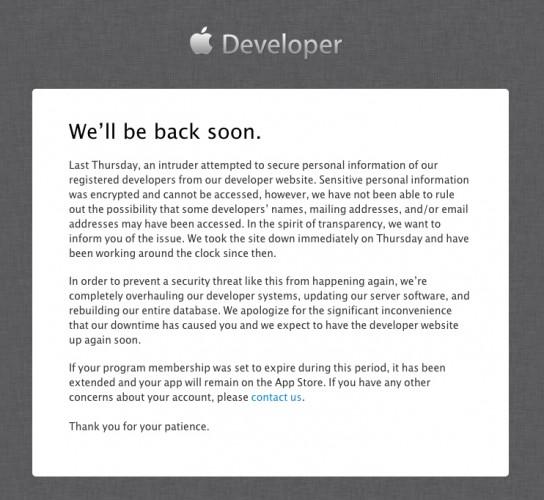 In order to prevent a security threat like this from happening again, we’re completely overhauling our developer systems, updating our server software, and rebuilding our entire database. We apologize for the significant inconvenience that our downtime has caused you and we expect to have the developer website up again soon.

If your program membership was set to expire during this period, it has been extended and your app will remain on the App Store. If you have any other concerns about your account, please contact us.

Thank you for your patience.” – Apple for Apple Developer Portal

Meanwhile Apple continues pushing new iterations of both mobile and desktop software in OS X Mavericks and iOS 7, both of which hit the road in earnest later this year. The public saw iWork iCloud integration in the most recent beta release, while iOS 7 and Mavericks remain developers-only.