Apple closing statement brings most damning documents yet vs Samsung

For those of you wishing to stay in the Apple vs Samsung trial in the heat of the battle will love to see the highlights in Apple’s closing statement, complete with a few clips from a document that very well may have Samsung on the ropes. This document is what Apple calls the “copycat” document and was acquired by Apple from Samsung’s internal design process labs, a massive set of pages that include the screenshots you see here. The massive bulk of the document has Samsung making side-by-side comparisons between the original iPhone and their own original Galaxy smartphone, making notes on how iPhone design cues could help them improve their own smartphone lineup.

It was Apple attorney Harold McElhinny that spoke up in the case before Apple would rest, with words such as, “Witnesses can be mistaken. They can be mistaken in good faith. Exhibits that are created in a trial are always created with a purpose. They can confuse, and can mislead” stated to make way for the presentation of the documents you see above and below. “Historical documents are almost always where the truth lies,” noted MyElhinny, quoted by CNET, pointing out the internal Samsung documents. 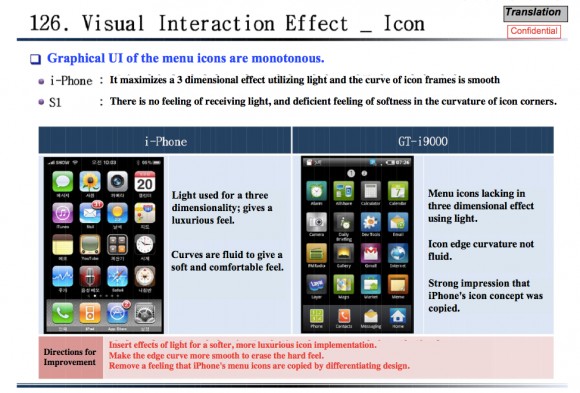 With items such as curving the corners of the icons offered up in Samsung’s version of Android in response to the iPhone’s strikingly similar offering, Apple has here a document that’s going to play a giant role in the jury’s decisions in this case.

“They sat with the iPhone and went feature by feature, copying it to the smallest detail. In those critical three months, Samsung was able to copy and incorporate the core part of Apple’s four-year investment without taking any of the risks, because they were copying the world’s most successful product.” – McElhinny

Apple also came in for the throat with comments on how Samsung didn’t bring in as high a class of witness collection as they did. Apple brought in both Phil Schiller and Scott Forstall, for example, Apple senior executives, while Samsung did not bring any executives whatsoever. Part of the reasoning behind this decision may have been the fact that Samsung’s executives reside mainly in Korea, but no comment to this effect has been made.

“From the very beginning, Samsung has disrespected this process. Apple brought you two of its most senior executives: Schiller and Forstall. They were willing to face cross. No Samsung execs were willing to come here from Korea and answer questions under oath. Instead of witnesses, they sent you lawyers.” – McElhinny 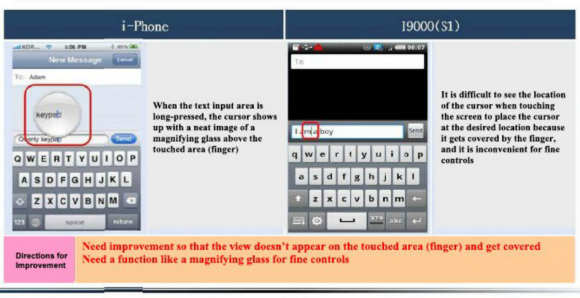 Stay tuned to our legal tag as well as our tags for both Samsung and Apple to see what the end of this case will bring. It is quite possible that one or both of the players in this case will face millions of dollars in penalties and far-reaching legal damages well into the future. Judge Koh at the head of this case has made it clear that now with a 109 page instructions document ahead of them, the jury has some reading to do: “I need everyone to stay conscious during the reading of the jury instructions, including myself. …we’re going to periodically stand up, just to make sure we’re all alive.”