Apple has unveiled its latest mobile chipset, the Apple A6X, replacing the already-capable A6 in the third-gen iPad, and doubling performance compared to the A5X along the way. The new chipset, a custom SoC using ARM cores, delivers not only that 2x CPU grunt but doubled graphics performance too. It’s the new chipset at the heart of the 4th-generation iPad.

Apple hasn’t detailed exactly what’s going on inside the SoC, and we’ll probably have to wait for the first teardowns and assessments to see which ARM cores exactly have been used. We do know that it gets new, next-generation ISP, however, for better multimedia performance. 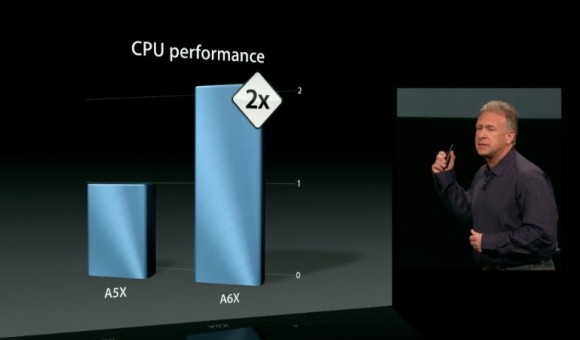 What’s particularly interesting is how the A6X could fit into Apple’s rumored ambitions to do away with traditional Intel processors in its desktop line-up, and instead adopt ARM-based chips of its own design. That could prolong battery life as well as leave Apple in control of its own silicon.

That probably isn’t in the pipeline for some time, though, and we’ll likely see a couple of iterations of A-series chips before they appear in notebook form factors. More on the new iPad 4th-gen in our Apple Hub.