As the infamous original “kart” racer from Nintendo continues to be console or Nintendo-device-limited, the folks at Rovio are hard at work creating their own racer. This is Angry Birds GO! In the teaser shared this week, the folks at Rovio have suggested that they’ve been conjuring up not just another endless runner, not just another simple battle of the racing cars, but a do-it-yourself create-a-kart sort of game – one that’s coming out soon.

They’ve teased this Angry Birds GO! game with a short video that suggests the team will be bringing something to the market – a game, of course – made for Android and iOS that’ll turn the mobile gaming industry on its head – again. When the original Angry Birds game was released, it was quickly crowned the most popular game for smartphones – and tablets – then the team translated their popularity over to desktop iterations of the game, physical toys, and back down to new gameplay versions in Angry Birds: Star Wars and Bad Piggies.

Here Rovio aims to take on the racing game market. And the endless runner genre. And they’re almost certainly going to take a route similar to that of Bad Piggies with the build-your-own gameplay element. 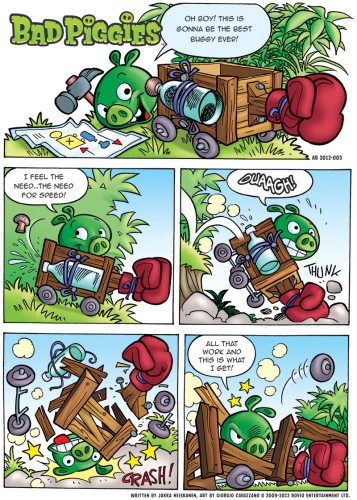 So that’s that leave us? Something like a combination between the comic above and the video below, but in a racing game. More like Mario Kart, perhaps, but with the style Rovio lends to each of its quick-play simple game apps for smartphones and tablets – and PCs, and laptops, and everything in-between, of course.

Those of you waiting for the likes of Mario Kart for Android and iOS will be waiting for many moons – Rovio will be getting your back very, very soon.