Android Wear has been updated to work with iOS, and while some suggest it’s the Apple Watch that’ll suffer, we’re thinking Pebble. The smartwatch that took hold a couple years ago with its super-simple interface, physical buttons, and most important of all – iOS integration from the get-go. Being the only smartwatch in the world worth a second glance was great for Pebble when it launched. Now things are different. Now there’s competition, and Pebble really, truly looks like it’s behind the times.

While the Android world is reaching its second generation of Android Wear devices and the first wave’s prices plummet, the Apple world has Apple Watch. Apple retains their users with a single device (and eventually device line).

Pebble shipped 1-million devices between January of 2013 and December of 2014. Apple sold over 2-million Apple Watches in three months. Over 720,000 Android Wear devices were shipped (not sold) in the year 2014. 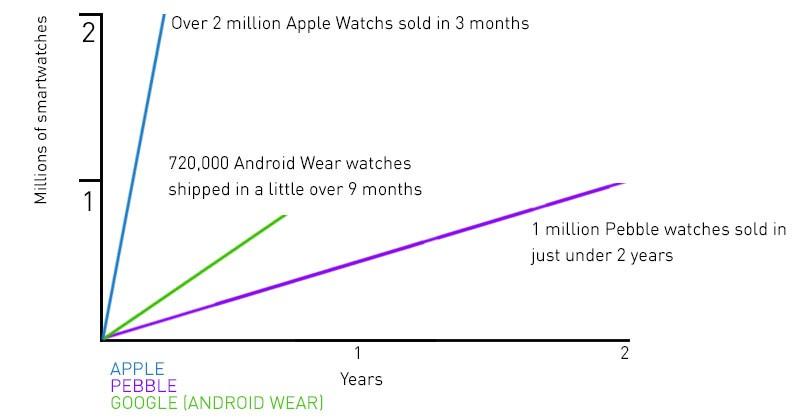 We do not have Android Wear sales numbers, and generally we’d never compare sales to shipments because they’re very different numbers. Shipping numbers here, however, can be especially telling.

It should be clear here that Android Wear has big potential in creeping up on Pebble, both from a multi-manufacturer angle and due to the speed at which devices are heading to stores. This is the investment of several major manufacturers of smart devices up against a single, far smaller company than any one of them.

For iPhone users there’s really not much of a question which device looks more appealing to their wrist. It’s either an Apple Watch or a non-Apple smartwatch, and given the pricing and quality in the Android Wear collection already, Pebble may need to watch their back.