Your Android phone could one day eavesdrop on background noise in voice calls and use it to pick out contextual adverts, if a new Google patent is any indication, with a barrage of sensors tailoring promotions to the user’s environment. The patent, “Advertising based on environmental conditions”, describes using a smartphone’s various sensors – tracking temperature, humidity, sound, light, air composition, location, and speed of movement, or any combination – to help pick mobile adverts that suit the environment the user is currently in. While clever, it’s a system that would likely prompt uproar among privacy advocates should Google ever attempt to implement it.

That simple explanation belies the potential complexity of the system. Google envisages using anything from basic location to ambient noise, time of day, temperature and humidity, movement and more, to figure out the context in which the user finds themselves. So, if you’re at a concert or sports game, your phone might identify which one based on your location and snippets of audio, and flag up other fixtures of the teams playing, music downloads of the band, or other linked promotions. 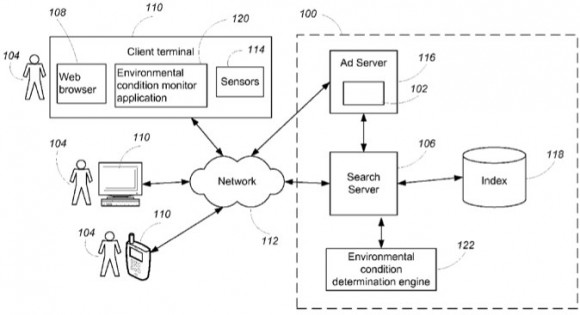 It’s not just phone-based advertising that could use the system, either. Google suggests the phone could merely be the identifier for the individual user, with adverts themselves being shown on some sort of nearby “digital billboard” – a tablet, screen, vending machine or something else – in some sort of promotionally-minded Internet of Things. Advertisers themselves could tailor their campaigns to only certain types of user, locations or environments, such as promoting late-night taxi services to those currently in bars, making them more cost-effective. Meanwhile users would get more accurate, relevant adverts, so Google claims, making them more useful.

Nonetheless, the idea of a phone listening in on your surroundings and cherry-picking adverts to suit isn’t likely to go down well with privacy advocates. Microsoft jumped at the opportunity to run a “Gmail Man” campaign sniping at the Google email service’s contextual promotions based on “reading your messages”, and this patent describes a far more involved version than simply scanning text for keywords.

Still, geo-fenced adverts using location already exist, and Google’s system would presumably make them more accurate than simply relying on a GPS or base station tower fix. Whether more relevant promotions would be enough for users to overlook the privacy concerns remains to be seen, however.