As the battle between iOS and Android rages on, we’re seeing Android pick up some market share in quarter three 2016. Strategy Analytics has published a new report for the quarter that shows Android making some gains while iOS loses a little ground. On top of that, the smartphone market as a whole showed some modest year-over-year growth.

In Q3 2016, Strategy Analytics says that Android shipments grew 10.3% over the same quarter a year ago. That translates to 328.6 million devices shipped as compared to the year-ago quarter’s 298 million. That gives Android a record 87.5% market share for the quarter.

Android’s success is compared to Apple’s 12.1% market share for the quarter, which is down from 13.6% a year ago. Total iOS shipments came to 45.5 million, which is again down from Q3 2015’s 48 million. So, not huge losses for Apple, but enough to give Android a boost that brings it dangerously close to 90% market share.

It’s worth pointing out that Apple’s new iPhone 7 and 7 Plus launched in September, which was the final month of the quarter. That means we should see sales for Apple rise sequentially in Q4 2016, but Q3 also saw the introduction of Google’s new Pixel phones. While those may provide Android with another boost, Strategy Analytics warns that they may actually hurt Android’s market share in the long run. 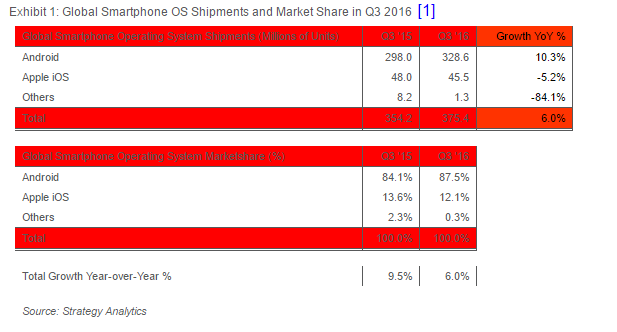 READ MORE: Google Pixel first impressions and hands-onThat’s because, as Strategy Analytics director Woody Oh points out, Android has managed to snatch up this much market share because of the sheer number of manufacturers using Google’s OS on their phones. By launching the Pixel, Google is placing itself in competition with hardware partners that helped make the platform a success in the first place. When you couple that with the fact that many Android device makers don’t pull in a ton of money, some of these manufacturers may decide to leave the OS for greener pastures.

Still, even with concerns over the Pixel phones and an overcrowded market, Android finds itself in a good spot as we work our way deeper into Q4 2016. It’ll be interesting to see how these shares shift in this final quarter of 2016, which holds the largest shopping season of the year.