Android Apps coming to Windows 11: Why it matters

After much speculation and rumors all this year, Windows 11 operating system is now officially announced by Microsoft. The next refreshing OS is coming to machines this holiday season and the excitement is already on a high. A major part of the Windows 11 ecosystem is going to have presence of all supported Android apps, which comes as interesting news for users.

Yes, Android apps will be present on the Start menu bar, have their own dedicated icons on the taskbar and launch with desktop shortcuts too. Panos Panay, Chief Product Officer at Microsoft said that the Android apps will be installable without much hassle from the OS interface, and users will be able to enjoy their frequently used apps in the Windows 11 environment.

Of course, later this year when the operating system will officially be available for purchase or upgrade – from compatible Windows 10 systems – the next era of Microsoft’s long-lasting legacy will be marked. 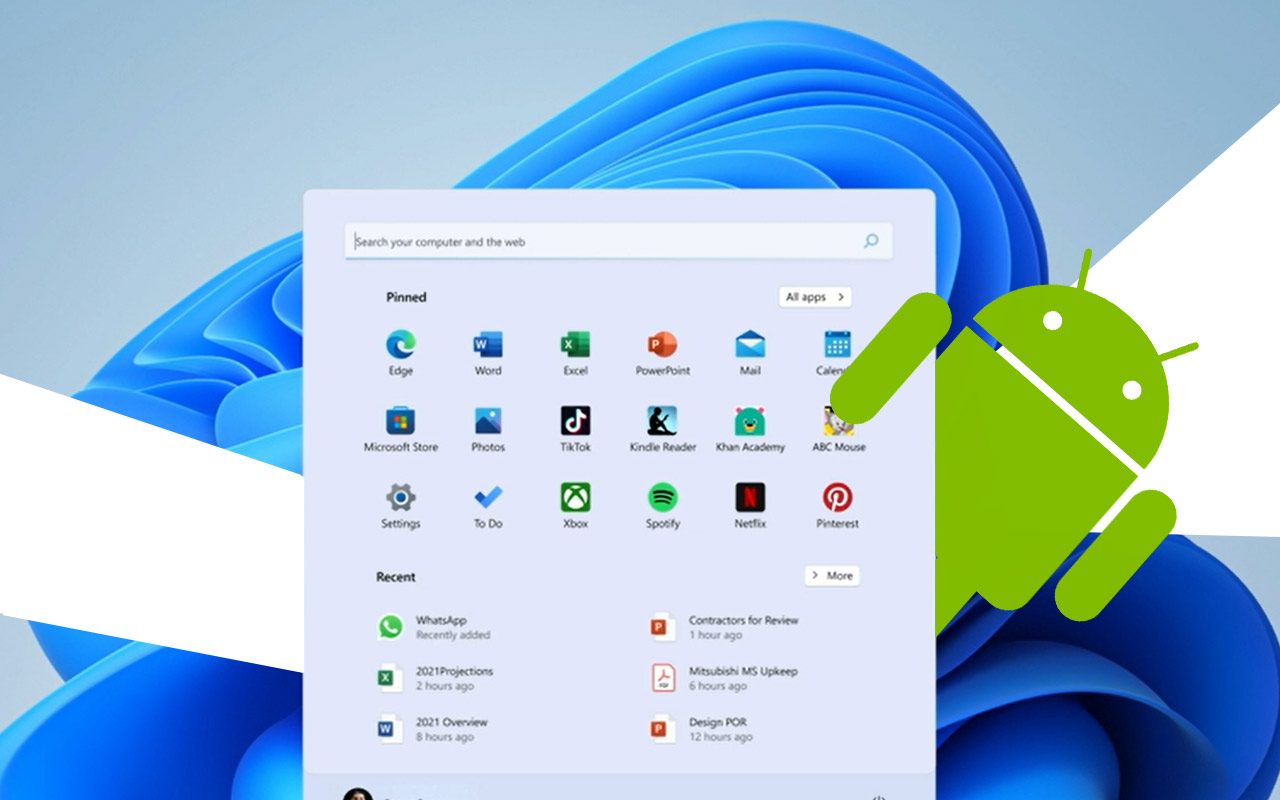 This move will benefit the users as well as developers since the former won’t have to rely on the web version of an application while the latter will have the liberty to skip developing the app dedicatedly for the Windows only version.

As a user, you’ll have the freedom to multitask on Windows applications like Word while having apps like Kindle, Ring, Instagram or TikTok open in another window. The new Windows 11 Snap feature will come in handy to choose the layout of the multiple apps on the screen real estate. Total bliss for multitaskers who like to have their apps organized visually to their preference.

For those using a tablet or dual-screen gadget loaded with the next OS version, this will boost multitasking in interesting ways. Having a seamless ecosystem of all that you desire on your tablet or laptop is going to change the Windows dynamics in the coming years. 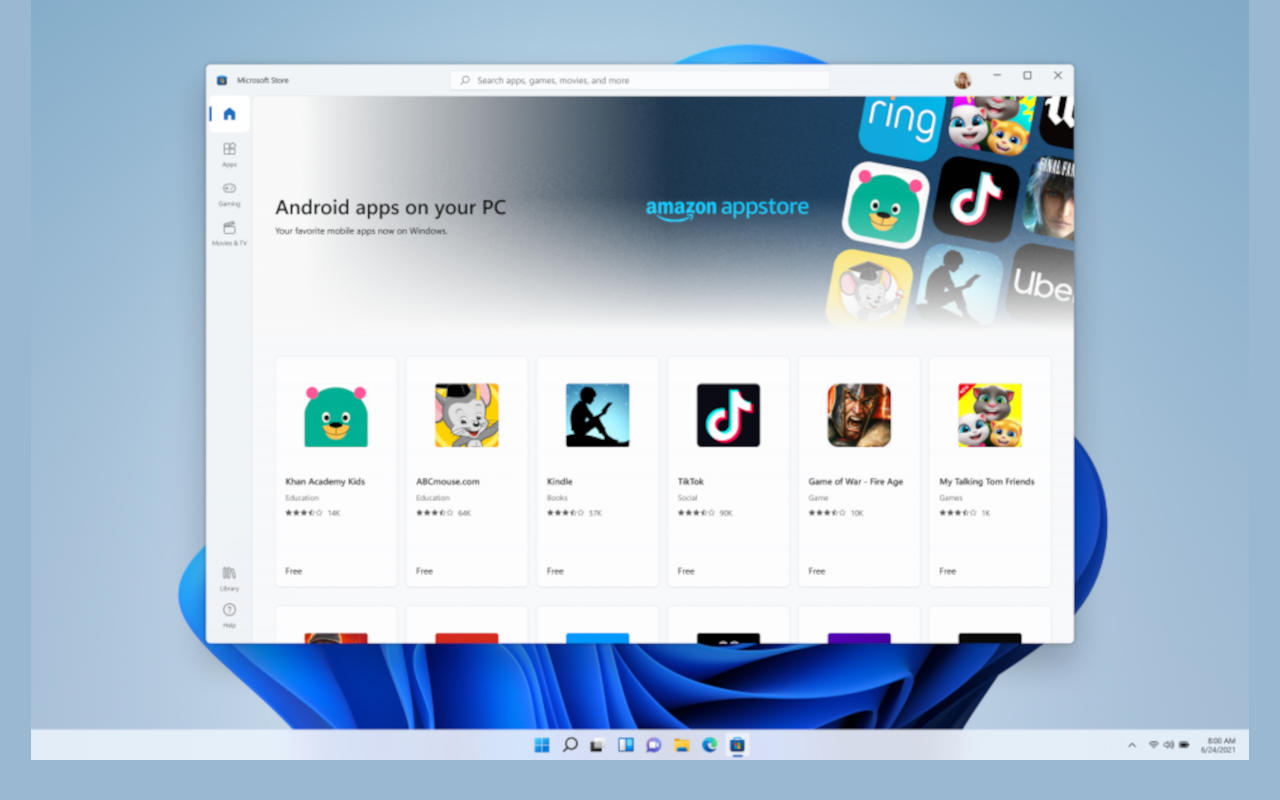 The big surprise for Android apps to land on the Windows 11 ecosystem comes in the form of Amazon Appstore marketplace integration. Rather than partnering directly with Play Store to offer the Android apps, Microsoft is taking a detour. To make the whole experience seamless, these non-native apps will leverage the power of Intel Bridge technology to run on x86 processors.

In a press call, Microsoft has confirmed that these Android apps will not only work on Intel-powered systems but also on AMD-based systems as well. This makes Windows 11 perfect for touch-centric workflow apps since the domain of compatible systems is going to be huge.

These developments at this stage make Windows 11 a lot more inviting OS for mobile users too. The early builds of the operating system are coming as soon as next week via the Insider program, and it’ll be interesting to see what Microsoft is planning to ultimately present its users with. 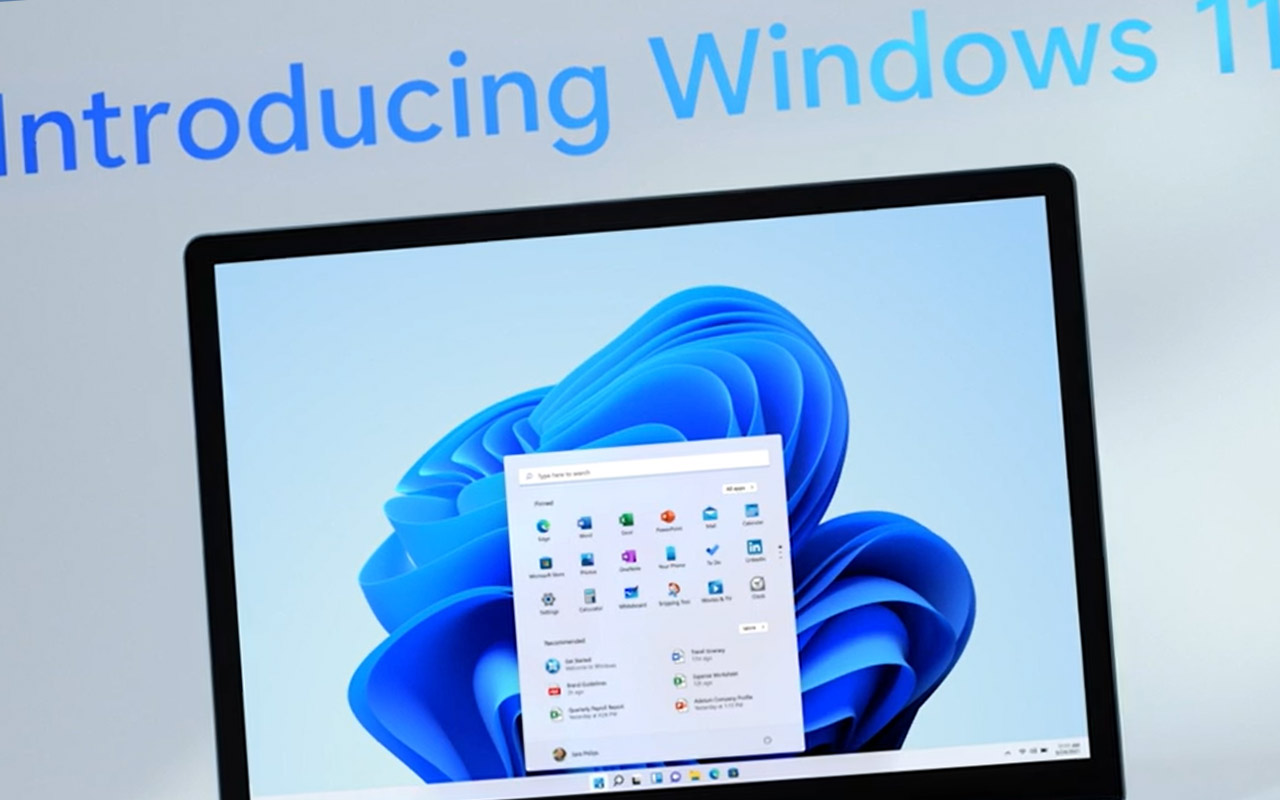 Whether the new operating system will have the ability to sideload apps is anybody’s guess right now, but it will be a good option, at least for the users. This will help fill the gaps for bringing apps to the ecosystem that will not be offered officially via the Amazon Appstore.

Another important consideration is the level of involvement of the Play Services since Amazon Appstore will be the kingpin for managing the apps here. By the look of things, we can count out any chance of Play Services coming in the mix. From developers’ perspective, it will be interesting to see how much Amazon is willing to lessen its revenue cut in the future.

Sure it has reduced the revenue share to 20-percent for smaller developers, but keep in mind, Google has reduced it for developers earning their first one million to 15-percent. To have the competitive edge, Amazon will have to roll down a little since it is the Android apps in question here, and more developers need to be attracted toward the platform.

Flood of apps destined for the OS 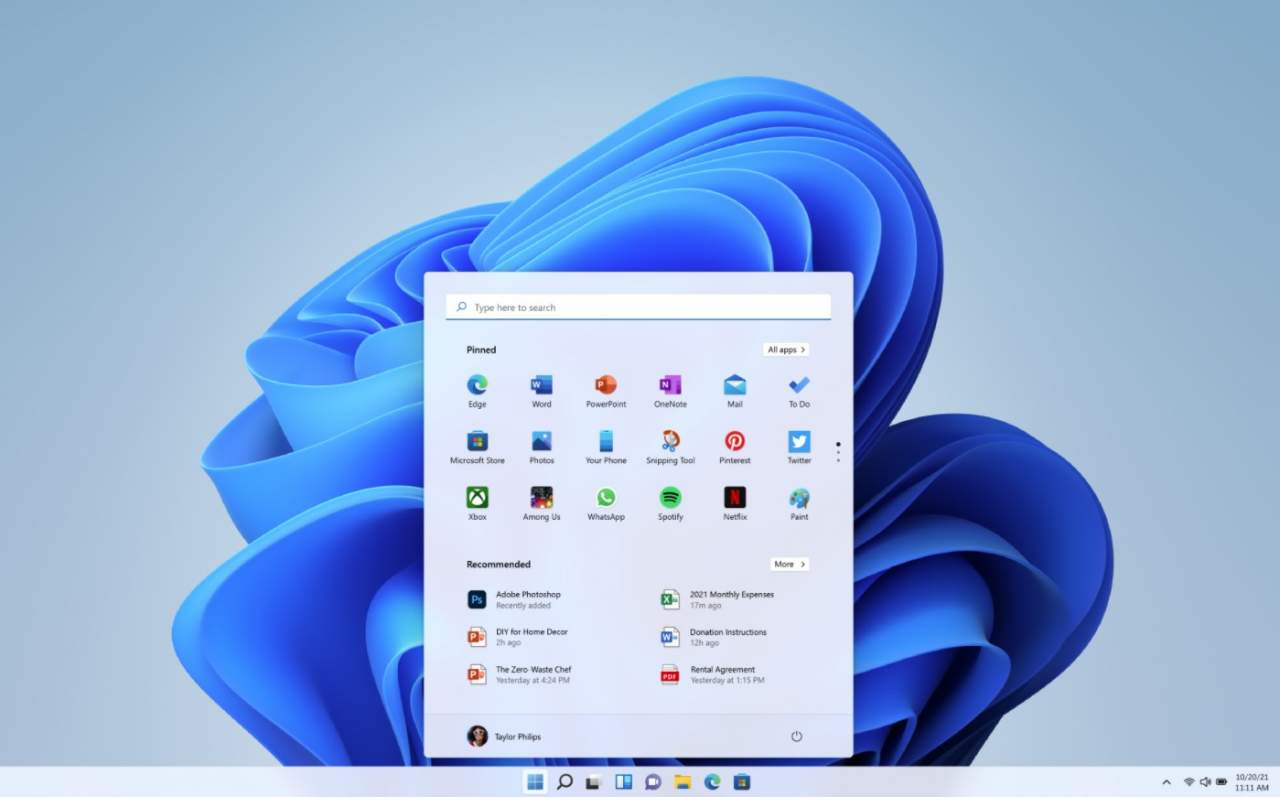 While Windows’ own store is nothing much to talk about, this move will flood the Windows landscape with content like never before. There are almost 1.85 million Android apps out there, so you can very well imagine the possibility in the near future.

The apps will have the option to be added to the centered taskbar or pinned or snapped to the different multitasking modes. For now, there are no mentions of the hardware or software level requirements for the apps to run on Windows 11, but they should be something developers will not have a hard time coping with. 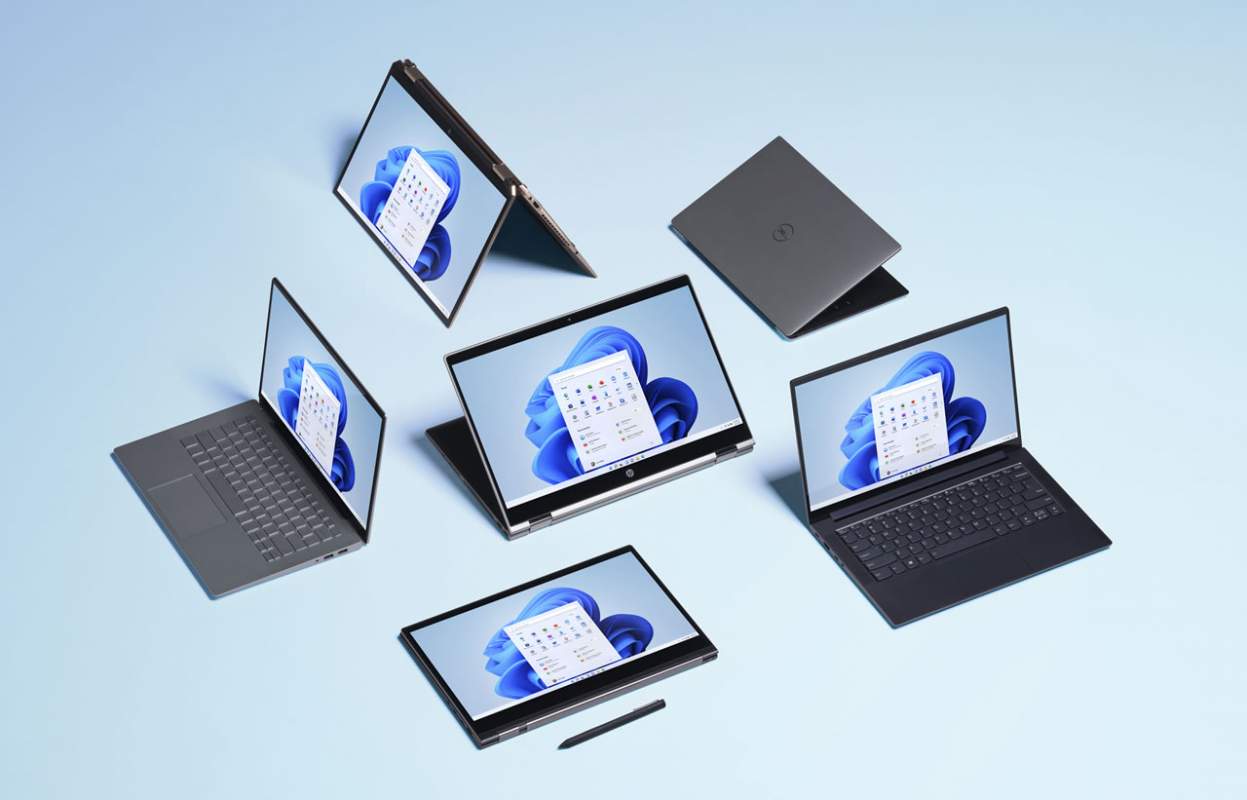 Those who have already used the Amazon Appstore and Google Play Store know the wide gap in the user experience between the two. So, expecting a seamless, near-perfect integration between the Windows and Android apps – just like the macOS and iOS – is a farfetched dream for now. However, that doesn’t mean Android apps experience on Windows 11 will not be worth looking out for.

We just hope, the Android apps don’t encounter the same irks as that on the Chrome OS. Common sense would make us believe that there will be no such bumps as Windows 11 is a vast operating environment as compared to Chrome OS, which is based on Google’s cloud services. Since, for now the Android apps are presumably an add-on feature and not something core to the operating system, Microsoft will have all ends plugged for good.

The move to collaborate with Amazon rather than Google makes perfect sense as Microsoft has to worry about Chromebooks which are hugely popular with the users. In the end, it will all come down to the ease of use of the Amazon Appstore, and how well Amazon can evolve for a PC/Android experience in this niche ecosystem.