The newest version of Google’s mobile operating system is on the way to devices of all kinds in the very near future, bringing a load of updates for the back end as well as the front in Android 4.4 KitKat. This version of the software brings changes first to the Google Nexus 5, made by LG. This device has a 5-inch display with 1080p resolution and is the headliner device for this OS.

The look of Android 4.4 KitKat takes on a full-on translucent skin, not to mention a flat white color code. Here you’ve got gradients here and there, but for the most part an allowance for the user’s preferences in wallpaper and UI elements to shine through as much as possible. 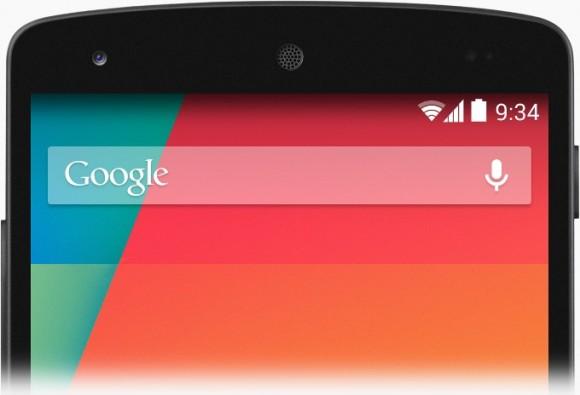 In addition to this, a new Chromium WebView has been presented to developers. For you, this means the basic internet viewing experience (at least through Google Chrome) will be dramatically improved for those website editors that choose to make full use of it. This new element brings on HDML5 features found in Chrome for Android 30 and brings on JavaScript Engine (V8), and it’s all included in all compatible devices running Android 4.4 KitKat. 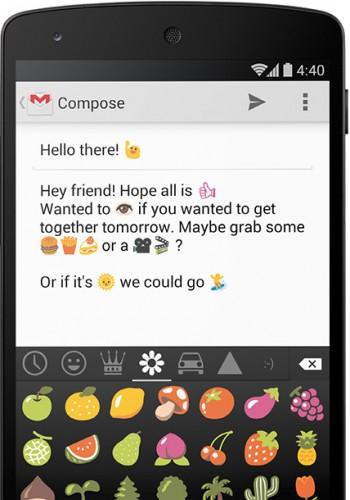 As an added fun bonus, Google now also allows Emoji everywhere. That’s right – those tiny images that wink at you, now available inside the subject line of a Gmail email. This comes straight from the Google Keyboard, so you may end up seeing them working before Android 4.4 KitKat makes its big spread.

Low-end devices brought into the fold

This OS brings on the ability for entry-level devices to function right out of the box. This newest version of Android doesn’t require more than 512MB of RAM to roll, meaning even the oldest of devices have the potential to run it. Using a new API, this OS allows developers to match any device’s memory configuration, optimizing them as such.

NFC payments for all

There’s a new feature called Host Card Emulation (HCE) in Android 4.4 KitKat, one that allows any device with a NFC hardware to pair up with NFC apps for payment. This seems simple when you first look at it – in fact it simplifies the convoluted system that was in place before now, making everything a lot smoother.

With HCE you’ll be able to work with card access, loyalty programs, payments, and more, with any app on an Android device able to emulate an NFC smart card. With this system, no provisioned secure element (SE) is needed inside the device. There’s also a new Reader Mode included in KitKat, allowing users to use apps as readers for HCE cards and other odd NFC transactions of all kinds.

Surprise – it would appear that Google is building in low-power abilities into their software framework. This “hardware sensor batching” allows optimization of tasks that would normally chew your battery life up from being on all the time. This sort of batching allows your processor to remain in low-power idle states until each new batch is delivered.

This mode works in a vital way with low-power, long-running processes such as the monitoring and tracking of sports and fitness statistics. If you’re walking and detecting your steps – this system will chew essentially no power from here on out. Sensor Batching requires that Google work with chipset partners to integrate with individual devices – at the moment, Sensor Batching will be working only on the Nexus 5. 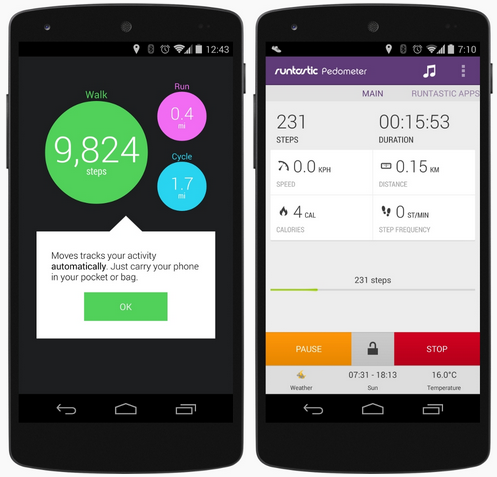 Speaking of sports and fitness apps – Google has integrated platform support for a couple of new composite sensors in Android: step detector and step counter. The integration of this software allows software developers to skip the lengthy algorithm creation that’d need to be done in each individual app as it’s already built-in to the platform.

The step detector and step counter sensors are working in the Nexus 5, and will be integrated into future smartphones soon as Google – again – will be working with chipset partners moving forward.

Where the default for Android apps before now was to include on-screen buttons and – in some cases – the notifications bar as well, here Google introduces full-screen immersive mode. Here you’ll find a full-bleed user interface hiding all system UI elements. A key element in this immersive mode is the ability to pull up (or down, as it were) these menu elements. 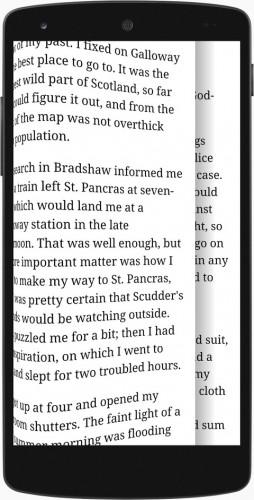 To find the Android elements in this fullscreen mode, users have only to drag their finger in from the bottom or top of the display, thereby revealing the menu bar or home buttons onscreen. This new gesture also works with previous methods for doing this same thing – hiding and revealing the status bar.

Android 4.4 KitKat introduces a system-level screen recording utility. This allows you to create self-help videos, demonstrate apps (if you’re a developer), or generally record whatever suits you. This system-level solution also adds protection for those apps that don’t want themselves recorded – like Google Movies.

With the SurfaceView.setSecure code, developers are able to keep their app in the dark when this screen record function is activated. This function is currently only set to work through the adb tool included in the Android SDK and in the DDMS panel in Android Studio – though we’re expecting it in basic builds of Android for consumers soon.

Users that wish to read text rather than listen to sound will now be able to do so system-wide. This ability appears in Settings – Accessibility – Captions, but won’t be available on every single 3rd-party app immediately. Google asks that developers seek to adhere to specifications on this system as closely as possible, but it does not appear (at the moment) that it’s an absolute requirement for everyone. 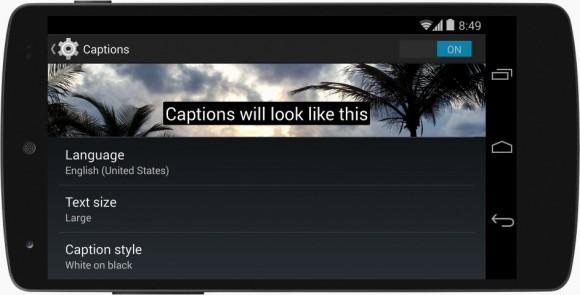 Captions will be in white text over a black block – unless the user chooses to flip it inverted. They’ll also have a choice of language and text size – this also opens up the possibility of Google Translate working with captioning, but that’ll be a ways off (aka there’s no mention of it in Google’s descriptions quite yet).

Currently “only available on the Nexus 5”, Google is indeed moving forward with the ability to call upon the intelligence that is Google Now with the “OK Google” command. This voice command works from your home screen now as well as inside Google Now where before it’d only have worked from inside Google Now.

Again, the availability of this voice command functionality will be limited to the Nexus 5 until other device manufacturers jump onboard. This functionality is strikingly similar to that included on the Moto X and in Google Glass. You’ll also find a similar feature in the LG G2 – though in that case it’s coming straight from the lockscreen.

Also note that though it may appear that the Google Nexus 5 is getting preferential treatment with this ability because of its Qualcomm Snapdragon 800 quad-core processor and Qualcomm’s Snapdragon Voice Command system, it’s more likely that a 3rd-party solution is at work here. Optimization must be done at a hardware level for this sort of ability to function (for now).

Like you’ll have worked with in Chrome OS, Android now has the ability to work with Cloud Printing. This system can print to your printer so long as it’s Wi-fi capable and is either connected to Google Cloud Print, an HP ePrint printer, or working with an app in the Google Play Store.

You’ll now be able to work with QuickOffice – along with some other apps early on – to save files to cloud apps such as Google Drive. This system also allows you access to recently used files (in the cloud) for easy access from any machine. Simple and slick – and certainly welcome now that more devices are offering free cloud storage with purchase.

Snap, we were only one version of Android away from being right! Android 4.4 KitKat comes with a built-in ability to work with IR-Blasters for apps. This means that users of the Google Play Edition of either the HTC One or the Samsung Galaxy S4 will actually be able to use those pieces of hardware rather than just letting them sit there, not doing anything. 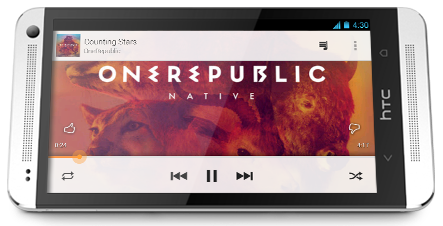 Developers will be rolling with an API by the name of ConsumerIrManager, but they’ll first want to be checking to see if the device their app is on is working with an IR-blaster in the first place. The HTC One and Galaxy S4 are just a couple of the many devices on the market today taking the infra-red craze (or resurgance, whatever you want to call it) to heart.

Here at SlashGear we’ll be covering the whole KitKat shebang through our ever-growing Android 4.4 KitKat tag portal. There you’ll find explorations of the software as well as how it’ll be affecting the first devices it hits: Nexus 5, Nexus 4, Nexus 7, and Nexus 10! At the moment it’ll be arriving on the Nexus 5 first, followed by the rest (as well as the Google Play Edition of the HTC One and Galaxy S4) in the coming weeks!