First reaction among those setting eyes on Apple’s new iMac with Retina 5K Display after it was announced yesterday was typically along the lines of “Wow”: even Tim Cook couldn’t resist the charms of the 14.7m pixel all-in-one, and he knew it was coming. The second, though, from a few laterally-thinkers in the crowd, was to ask whether the iMac would support Target Display mode, and thus turn into a standalone 5K monitor for a plugged-in MacBook Pro. Unfortunately, that’s just not the case, and in fact some big changes need to take place before we can even get a standalone 5K update for the aging Thunderbolt Display.

Revealing the Retina iMac’s $2,499 starting price, Phil Schiller joked that “and for that we throw in an entire computer.” While that may have been meant tongue-in-cheek, it turns out that there was little Apple could’ve done if it had wanted to separate out display and Mac.

The problem is bandwidth: or, more specifically, how much Apple’s connectivity of choice can support right now. Thunderbolt 2 may be relatively new, but 5K resolution at 60Hz is just too much for it to handle. 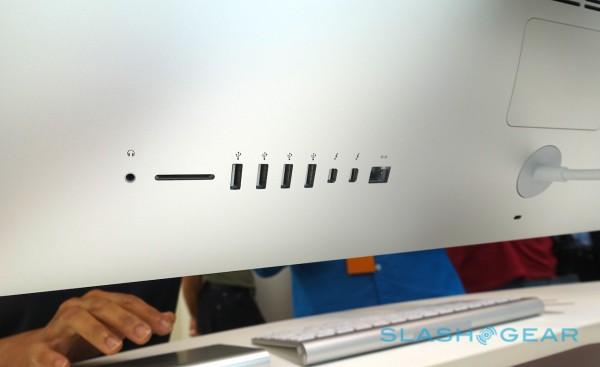 Thunderbolt 2 supports DisplayPort 1.2, which tops out at 3840 x 2160 resolution support at the 60Hz the new Retina 5K Display panel runs at. Drop to 30Hz and you can push the maximum resolution a little higher, but that’s not really an option for the graphics professionals likely to be interested in such a screen.

There’s a possible workaround, though it’s not quite up to the usual Apple levels of elegance. Two simultaneous Thunderbolt 2 cables could be used, if Apple produced a dual-input Thunderbolt 5K Display.

Apple might blanch at the idea of demanding two cables be tied up at once, but more importantly it would also only really work for one Mac in the company’s current range. Only the latest Mac Pro, Apple’s cylindrical desktop powerhouse, has sufficient Thunderbolt controllers: three, in fact, to drive its total of six Thunderbolt 2 ports. 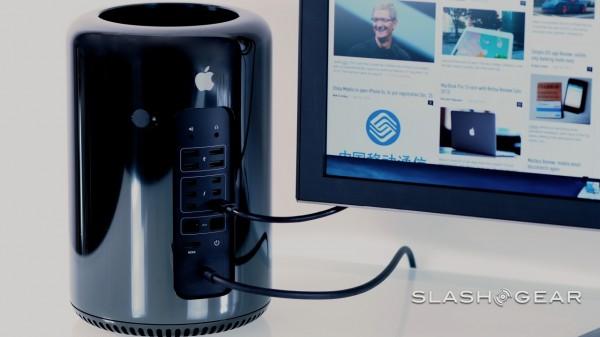 The MacBook Pro, MacBook Air, and others only have a single Thunderbolt controller, its duties split between two Thunderbolt 2 ports. So, even if you plugged a display into both of those, you’d still not have the bandwidth to support Retina 5K resolution.

It seems improbably that Apple would make a display that will only work with a single Mac, even if said-Mac is its most expensive model. What seems far more likely is that the company will hold off until Thunderbolt 3, which is likely to integrate support for DisplayPort 1.3. That was only announced last month, however, and there’s no timescale for when either it or Thunderbolt 3 might break cover commercially.

An adapter akin to the dual-link DVI could well be used to add support for existing Mac Pro owners wanting to couple Thunderbolt 2 connections and drive a 5K screen. That might be sufficient to stop too much in the way of angry early-adopters complaining that they can’t go higher than 4K.

So, it looks like the existing Thunderbolt Display will hang around for some time yet, while MacBook Pro owners will have to satisfy themselves with third-party 4K monitors to sate their desire for extra pixels. It also means I’ll have to update my wish-list for a next-gen Thunderbolt Display, though I’d still love to see an offboard GPU thrown in there too.