AMD may have been slow to join the tablet processor segment, but it isn’t wasting any time now its onboard. Key to its strategy in 2013 is Turbo Dock, a new power management system expected to debut on this year’s Temash SoC powered hardware, and which dynamically adjusts performance according to whether the computer is in slate-tablet or docked hybrid mode. We caught up with AMD at Mobile World Congress to find out whether it works.

AMD’s promise is a 40-percent boost in performance when the slate is docked in the keyboard hub, on the expectation that users are likely going to be doing content creation tasks in that orientation. On the flip side, performance is throttled back when the slate alone is used, still providing enough grunt for Full HD video playback and gaming, but extending battery life for longer runtimes. 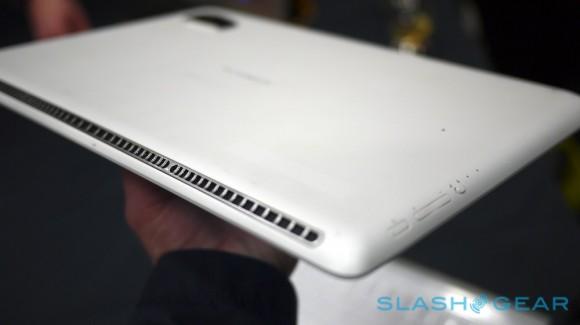 The demo hardware is a Compal reference design, with a 13.3-inch 1080p touchscreen and running Windows 8 on the Temash SoC. Considering it’s not a final product, it’s impressively put together: the slate docks into the sturdy hinge section with a satisfying click (and no worrying wobble), with motorized latches grabbing it to keep it in place. The tablet is finished in matte white plastic, with chrome detailing around the vents, and there’s a welcome sprinkling of ports – including USB and HDMI – which are available even when you’re using it detached. We’ve seen far too many hybrid designs that basically jettison their ports with the keyboard.

As for that keyboard, its been hewn from aluminum, and has crisp edges that resemble some of the more recent ultrabooks we’ve seen from ASUS and others. The keyboard and touchpad are a decent size (though very glossy). AMD isn’t talking specific battery life, since this particular hardware isn’t destined for production, but both components have a battery. 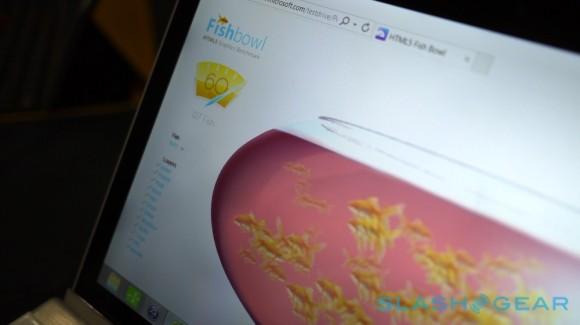 Key is the performance shift, however. AMD is using Microsoft’s Fish Bowl HTML5 test for Internet Explorer to show the graphics capabilities of the quadcore Temash chip, filling a virtual bowl with as many individually rendered fish as is possible while also sticking to 60fps. The differences are clear: docked, the Temash ramps up from 8W to 15W, and that’s enough to see a 40- to 50-percent hike in the Fish Bowl score.

It’s a promising system, with the dock delivering not only the conveniences of a keyboard and mouse, but lending extra potency to the tablet overall. AMD is calling them “performance tablets” to differentiate them from the iPads and Nexus 10s of the world, though whether it’ll manage to convince consumers to see that separation remains to be seen. Still, as users who expect to do content creation as well as consumption with our tablets, AMD’s extra bump when docked leaves us excited about Temash’s future.